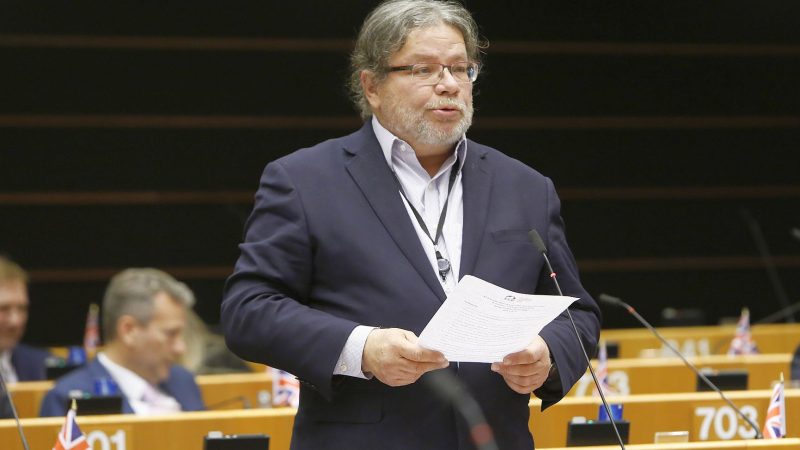 When the recent phone call between US President Trump and Ukraine’s President Zelensky went viral, it made headlines for several reasons, none of them good, writes Alexandr Vondra and explains what Ukraine should do to tackle crime and corruption.

Alexandr Vondra is a Czech member of the European Parliament with the European Conservatives and Reformists Group.

Although most of the mud flowed West, Ukraine did not escape unscathed, as ill-advised criticism of Germany and France for their lack of support to Ukraine became public. Firstly, speaking “the truth” is not always the best diplomatic instrument to move forward. Secondly, this is not the case for most of the other European players.

Ukraine is a priority partner for the European Union as it helps us to build resilience, strengthen human rights protections in the area and safeguard our democracy. Both the European Union and Ukraine should be committed to working together to tackle the challenges that lie ahead.

Since 2014, Ukraine has embarked on an ambitious reform programme with the main objectives of stabilising its economy and improving its citizens’ livelihood.

Recent political moves in the country show that Ukraine truly wants Europe’s support, but for closer European integration to become more than a nice slogan, the government should tackle the systemic corruption that not only undermines such integration but also hurts business and the legal economy by allowing criminal organizations to act with impunity.

For example, he signed a decree to increase the effectiveness of countering corruption and smuggling during the customs clearance of goods imported into the territory of Ukraine, something that in theory could increase the level of confidence of businesses in state bodies.

But signing a decree does not necessarily mean concrete action. The roots of corruption go deep in Ukraine and the current administration is suffering for the mistakes of the past.

For years now, Ukrainian politicians regularly accuse each other of corruption while claiming to fight it themselves, and MPs are on record stating that fixing corruption is Ukraine’s number one problem – but not necessarily its number one priority.

The impact on business is such that the Organisation for Economic Co-operation and Development (OECD) has stated that corruption is a “significant obstacle” to doing business in Ukraine. Companies mainly encounter corruption in business licensing, taxation and customs.

Since the decree was signed, Ukrainian authorities have intensified cooperation with the European anti-fraud agency (OLAF) to reduce the flows of lucrative goods like smuggled cigarettes into the EU across the border.

However, this problem shows no signs of diminishing. Ukraine is the number one source country for smuggled cigarettes. To root this out, more effective cooperation between OLAF, the EUBAM, member states and local Ukrainian authorities is essential to prevent criminals from operating across borders.

The EU-Ukraine Association Agreement on which the provisions towards closer integration are founded, contains anti-fraud and anti-corruption provisions as well as a Protocol on mutual administrative assistance in customs matters. But in a country where smuggling is not even a punishable criminal offence, change will not come easy.

Moving legal goods that cost little in Ukraine, to EU countries where those goods are expensive, is incredibly profitable, and media coverage has revealed the links between this and criminal organisations.

While Ukraine should continue to seek assistance, exchange information, and coordinate operations with the EU to tackle cross-border cases, this won’t be enough if smuggling isn’t criminalised by Ukrainian authorities first.

Criminalising smuggling would be a big step towards closer integration between Ukraine and Europe – both sides have a strong mutual interest in further closeness, as a means to promote peace and stability in the region.

However, this integration cannot come at any cost, and to be fully welcome at Europe’s table, measures aimed at cleaning up corruption cannot simply pay lip service to an idea. A whole suite of enforcement measures will be essential if there is to be truly systemic change, and a new generation firmly rooted in the rule of law can be guaranteed.

One response to “If Ukraine wants more Europe, corruption must end”