Not just arms supplies, other ways the West can help Ukraine fight Russia 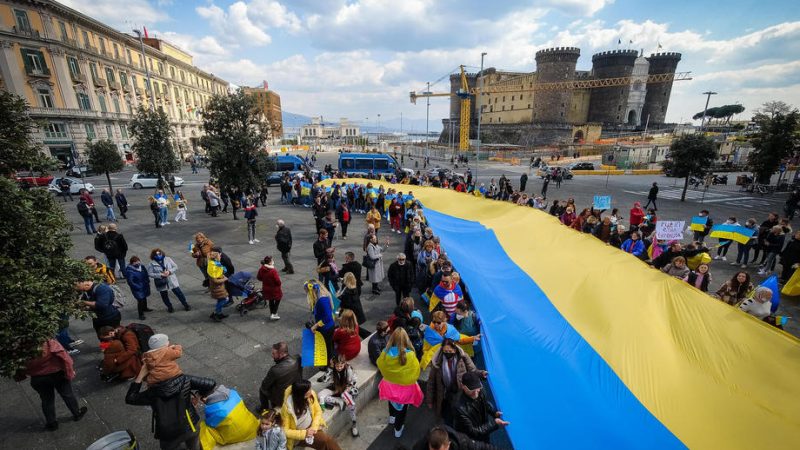 The Ukrainian community of Naples and Italian citizens protests against the Russian invasion of Ukraine, and express support for the people of Ukraine, in Naples, southern Italy, 20 March 2022. [EPA-EFE/CESARE ABBATE]

Ukraine is grateful for the supplies of weapons, but the country needs the help of the West on other fronts as well: first and foremost, political and economic ones writes Olga Lymar.

Olga Lymar is the executive director of the Reanimation Package of Reforms Coalitions, a group of 26 prominent Ukrainian NGOs and think tanks.

NATO intelligence warned Ukraine that Russia was preparing for a large-scale invasion a few months before it happened. During that period, the West provided Kyiv with several significant consignments of weapons (primarily anti-tank missile systems). When the Kremlin invasion began, these deliveries and supplies of other weapons have increased several times.

This played a key role in the ability of the Ukrainian Armed Forces to repel the Russian army and disrupt its plans for a blitzkrieg.

Money is the blood of war. More than a third of the revenues of the Russian budget are revenues from the sales of oil and gas. Thus, the first thing the West needs to do is completely abandon purchasing Russian fossil fuels, including coal.

The United States and Britain have already refused to buy oil and gas from Russia. Now we are waiting for the same decision from the European Union. However, Germany – one of the EU leaders – declares its unpreparedness to take these steps, arguing that 30% of its oil imports are from Russia and the embargo will negatively affect the daily lives of Germans.

We are very grateful to Berlin for stopping the Nord Stream-2 gas pipeline, which would have made the EU even more dependent on Russian gas. But the temporary rise in oil prices due to the refusal of Russian imports is not too high of a price to pay for Europe’s security.

After all, Berlin will soon find alternatives to oil supplies from Russia and it is difficult to seriously talk about Germany’s critical dependence on Russian gas when the winter has already passed.

Another critical step is to ensure the complete exit of all Western companies from the Russian market. Many of them have already done so, but several companies plan to continue operating.

The exit of foreign companies from the Russian economy means the loss of multimillion-dollar investments and tens of thousands of jobs. Every Russian citizen should feel the consequences of sanctions for Russia’s invasion of Ukraine.

This alone will make them realise that their president is doing something wrong.

Those Western companies that will remain in Russia should become not just toxic but even radioactive – other companies should not cooperate with them. Every dollar earned in Russia is a dollar earned on the blood of Ukrainians.

Business as usual should not work. Boycott the products of companies that continue to do business in Russia, and encourage your friends to do so as well.

Putin has crossed all possible boundaries with his unwarranted large-scale aggression in Ukraine. Therefore, extraordinary times call for extraordinary measures.

All Russian banks must be disconnected from SWIFT, Russia must be deprived of membership in the International Monetary Fund, and it cannot be a recipient of funds from the European Bank for Reconstruction and Development.

The embargo on the purchase of any Russian raw materials, the ban on the Central Bank’s operations with gold and foreign exchange reserves, the denial of access to cryptocurrencies – all these measures should become an economic weapon of mass destruction that will send the Russian economy into the abyss.

Yes, it will be a difficult decision for the West because it will affect the entire world economy. But this is a better option than waiting for the Russian economy to die gradually from the sanctions already in place. During this time, Moscow will continue to fight with Ukraine and even have a chance to somewhat recover economically after a possible reorientation to the market of China and other Asian countries.

Another important issue is the reconstruction of Ukraine, whose economy and infrastructure have suffered enormous damage due to Russia’s aggression. A major reconstruction program with specific expenditure items should be developed with the participation of both Western and Ukrainian experts and officials.

It is still difficult to calculate all the losses for Ukraine’s economy since the war is still ongoing (Ukrainian Prime Minister Denys Shmygal said that Ukraine’s damages suffered due to the Russian invasion now amount to $565 billion).

Ukraine must get a clear prospect of EU membership and join it soon. Formally, years must pass from the moment a country receives the candidate status to full membership in the EU. But Ukraine deserves to create a precedent in history, a precedent for our fierce opposition to the Russian aggressor.

The Russian war against Ukraine also has another front – the humanitarian one. Currently, Mariupol (450,000 people), Chernihiv (290,000 people), Sumy (265,000 people), as well as the suburbs of Kyiv – Irpin and Gostomel (a total of 75,000 people) remain wholly surrounded by Russian troops.

The Ukrainian army has retaken Bucha (28,000 people), but the city lies in ruins. These cities face a real humanitarian catastrophe: there is no light, water and heat supply, internet and mobile communications.

It is impossible to bring food and medicine to these settlements, and people live in basements, hiding from Russian shells and bombs. Several times, Russian troops opened fire on evacuation columns of civilians from these cities, despite the agreements to provide “green corridors”.

It is difficult to put Putin at the negotiating table discussing a complete ceasefire and withdrawal of troops. He seems to be living in his reality and intends to continue the offensive at any cost.

But with the consolidated position of the West, it is possible to achieve at least the agreement on the evacuation of civilians from the surrounding cities or at least the delivery of food and medicine.

Ukraine is stubbornly and heroically resisting Russia on the military front. Due to the continued supply of Western weapons, the Ukrainian armed forces are levelling the numerical advantage of the Russian army. But we need the help of the West on other fronts as well: first and foremost, political and economic ones. Only colossal external and internal pressure can break the bloody Putin regime.