Parallels between the crises in Ukraine and in the Balkans 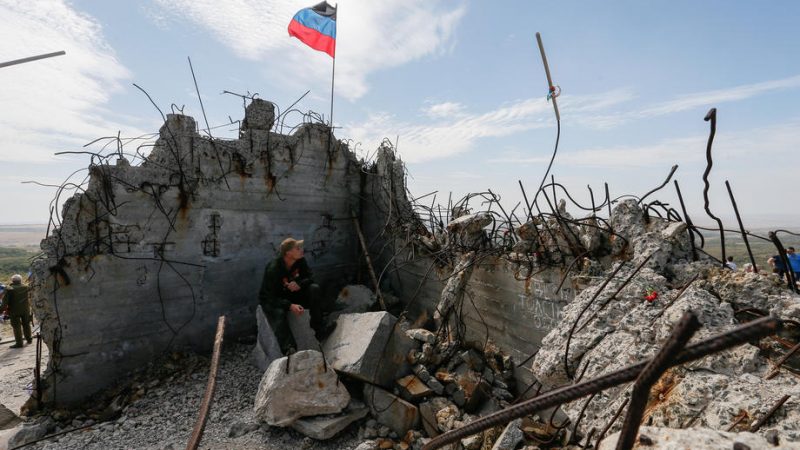 A militant of self-proclaimed Donetsk People's Republic (DPR), who took part in the fighting in this location in 2014 sits on the damaged Savur-Mohyla memorial with the DPR flag not far from the pro-Russian rebel's controlled Donetsk city, Ukraine, 8 September 2020. [EPA-EFE/DAVE MUSTAINE]

The enemy of Putin’s Russia is stability, and its real interest is the constant maintenance of tensions, if necessary with occasional military actions so that it remains a factor that you must call if you want a solution, writes Orhan Dragaš.

Unresolved problems in the Balkans are often compared to the crisis between Russia and Ukraine. There are reasons for that and even arguments that will help you make a seemingly good parallel and draw the same conclusions from them. But still, be careful with that.

It is true – both in the Balkans and in connection with Ukraine, the centre of the problems are territorial and ethnic disputes, which go far back in history. There was already an armed conflict in both places, and the ground has not calmed down yet, so both regions are post-conflict zones that are looking for a careful solution for long-lasting peace. Finally, both crises are highly internationalised, the conflict is on the West-Russia line and directly involves rivalry between Washington and Moscow.

Countless analytical texts and reports have been written on these parallels, the same arguments have been discussed at professional conferences, and so on for years.

Why not, when these few elements give space for experts to draw attention with their lucid analyses and assessments? But let us ask ourselves – are they the right help to better understand both crisis areas or are they something completely different?

Are, perhaps, Ukraine now, and the Balkans for three decades, an Eldorado for the army of international experts who build careers on them, attached to various funds, living in fear that these conflicts will end, because who will then listen (and finance) their lucid parallels, analyses, and forecasts?

Therefore, among experts, it is not surprising that the prognosis of the cataclysmic outcome of the Ukrainian crisis is very widespread, just as we have been hearing announcements about a new hell in the Balkans from more or less the same authors for years. I am afraid we will disappoint them here.

One must always keep in mind that Putin’s Russia is built on the return of the sense of empire and that it is searching for its identity. In making that narrative, it is demanded that Ukraine be kept at Russia’s side, even at the cost of world peace.

This goal and the price list are set by the Russian president, which he has already confirmed with his aggressive moves towards Crimea, the Sea of Azov, and now through the crisis in Donbas.

He knows that Ukraine is special, that the Russian Empire was built in Kyiv, the cradle of all Russian cities. He also knows that the two countries are like two brothers who despise each other – Russia is younger and stronger, and Ukraine is older, which is why it cannot challenge it to an open fight.

For Putin, however, it is frustrating to know that he cannot afford to annex the whole of Ukraine. The consoling goal is, therefore, a vassal and loyal, formally independent Ukraine that will serve as a sociological trench around the “empire”, similar to those that Russian rulers have dug around their cities in the past.

Russia needs a satellite Ukraine, something like Belarus, so that the Kremlin can show its subjects that “empire” is not a fairy tale and that it really exists, at least as a stage set.

That is why the fear of a military conflict between Russia and Ukraine was used to intimidate European politicians, who were convinced that the war would lead to a massive influx of refugees into Europe. At the same time, to make this fear more credible and unacceptable to European politicians, Russia has occasionally changed the scenario by introducing a tactical nuclear strike on Europe.

Russia has at least four options on how to keep Ukraine. The first and most expensive and somewhat dramatic is the invasion of Ukraine. The second is to elect a president loyal to Russia and compromised by Russia. The third is to include in Ukrainian political life a group loyal to Russia and dangerous for Ukraine with the right to vote and the right to veto in the Ukrainian parliament. And the fourth is the special status for the region in Ukraine controlled by Russia.

The invasion of Ukraine is the least possible scenario for many reasons. It will be very difficult for Russia to bear the cost of the war with a country of 50 million people near its border, and at the same time, face massive Western sanctions. We are moving away from this option even more after the recent talks between Presidents Biden and Putin, and especially the upcoming talks between high diplomats of the two countries in Geneva this month.

Russia will surely cultivate, nurture, and compromise Ukrainian politicians in the long run, hoping that Ukraine will elect a pro-Russian president and parliament once again.

At the same time, Russia will work on reintroducing the separatist Ukrainian territories into the Ukrainian political and social narrative so that this new parliamentary faction would block all initiatives for joining NATO.

If Russia will move its troops to Ukraine at all, it will be only to justify its current presence in the separatist region of Donbas. The possible granting of an internationally recognised special status to the territory in Donbas, which was occupied by Russia, may indicate the formation of a permanent Russian military base in Donbas.

This military arrangement can receive a NATO response by opening the possibility for the Alliance to be present in Ukraine on a temporary and conditional basis, without permanent NATO membership for Ukraine. In this way, the great military presence of the two rivals would bring balance to the territory of Ukraine, and that in itself would even lead to the consolidation of opportunities.

Here we come to a really important parallel between the crisis in the Balkans and the crisis in Ukraine, because Russian strategic interest is at the centre. Namely, in none of these areas does Russia want an outcome or a long-term stable solution.

Its real interest is the constant maintenance of tensions, if necessary with occasional military actions, so that it remains a factor that you must call if you want a solution. And when you call, then you have to offer something.

The victims of this Kremlin strategy are, in this case, Ukraine and the Balkans. That is why possible “prey” in Ukraine will be bitter, just like in the Balkans, because both crises are going in a direction that Russia essentially does not want, and that is long-term stability.

It will have to accept such a reality because there are not enough resources for the fairy-tale one – imperial and glittering. There are neither financial nor military, and especially democratic and human. That will be enough for the other side because it has shown that it has all those resources, which can discourage Russian aggression. Ukraine and its gradual exit from the crisis will best confirm that.

So, things are not going in the direction of a cataclysm, just like in the Balkans. That is good news, except for those who planned to live on the crisis in these two regions for many more years.