‘Russia burns our books hoping to destroy our nation’ 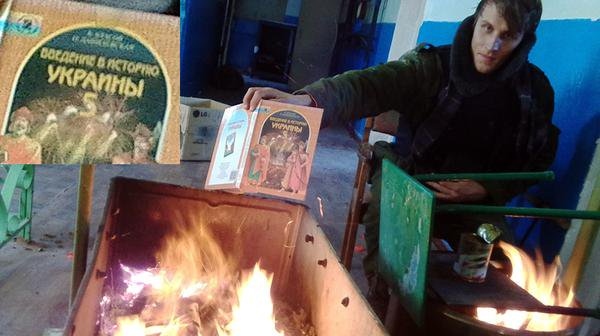 A photo posted in Twitter appears to illustrate that burning Ukrainian books may be part of what Vladimir Putin calls 'de-Nazification'.

Roman Rukomeda is a Ukrainian political analyst. This is his 24th account of Russia’s invasion into Ukraine, which he succeeded to send to EURACTIV despite hardships and limited internet access.

The 29th day of war is coming to an end. Having no success on the battlefields, Russian aggressors are committing broader and more disastrous war crimes against the civilian population of Ukraine.

Russia began to use terrible and aggressive weapons – phosphorus munitions. Their use is prohibited by the UN Convention on Inhumane Weapons, and Article 2.2 of the Protocol on the Prohibition or Restriction of Firearms to the Convention on Specific Weapons strictly prohibits the use of phosphate munitions in urban surroundings.

However, Russian terrorists used these awful bombs in the towns of Popasna and Kramatorsk in the Donetsk region and bombarded Kyiv with them yesterday.

Russian war criminals create painful and inhuman conditions for hundreds of thousands of peaceful Ukrainians. In the Donetsk region alone, 200,000 people have no access to drinking water due to the attacks of the Russian invaders. Currently, there is a threat that the Donetsk region may be cut off from water supply altogether in the coming weeks, said the Commissioner for Human Rights of the Verkhovna, Rada Lyudmila Denisova.

The real tragedy is developing in the surrounded city of Mariupol. According to the information from the city council, about 15,000 Mariupol residents were illegally and massively deported to Russia.

Russian war criminals ultimately force people already exhausted by the war to get on buses. There is also information that the Russian terrorists are confiscating people’s passports and other identity documents. So, they are massively kidnapping people from Ukrainian territory and taking their documents. The destiny of those Ukrainians is unknown.

The Ukrainian Ministry of Defence informs that since the beginning of the war, Russian aggressors have made 1804 air attacks on Ukraine, mostly on civilian objects. Some 467 rocket and missile attacks have been carried out (including ballistic ones with devastating destruction capacity).

Hundreds of civilian buildings were destroyed and people under their ruins died. Russian terrorists are intentionally shooting at people receiving humanitarian aid, like in Kharkiv today, where they killed six and wounded 15 peaceful residents.

According to UNICEF, one month of the war in Ukraine led to the resettlement of 4.3 million children – more than half of the country’s 7.5 million children. More than 1.8 million children have moved to neighbouring countries as refugees. A further 2.5 million children have become internally displaced persons within Ukraine. The war caused one of the fastest mass displacements of children since World War II. This crime is one of the worst possible. Like many others, it cannot be left without severe punishment for Russian war criminals if any international law and humanitarian law elements are alive.

To show the abyss of moral degradation and inhuman behaviour of Russian beasts in Ukraine, I shall mention their action on temporarily occupied regions of my country.

Russian invaders confiscate books and destroy school textbooks on the history of Ukraine. In the libraries of the temporarily occupied territories of Luhansk, Donetsk, Chernihiv and Sumy regions, the seizure of Ukrainian historical and fiction literature has begun, which does not coincide with the postulates of Kremlin propaganda.

Summing up all the mentioned war crimes of Russian aggressors, it is necessary to say that the Russian goal is not the capture of Ukraine – but its total destruction as a state and nation. Now Russia has committed the biggest war crimes in European history since WWII.

Fair punishment of Russia for its crimes in Ukraine is a matter of preserving the international rule of law, human and democratic values for our collective future.