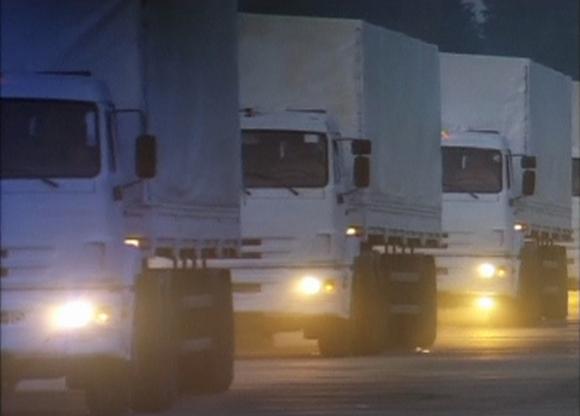 A Russian convoy of trucks carrying humanitarian aid for Ukraine sets off from near Moscow in this still image taken from video August 12, 2014. (Reuters)

Russia’s decision to send its humanitarian convoy is a way to test the Ukrainian government’s — and the West’s — response to Russian moves, writes global intelligence company Stratfor.

Russia’s decision to send its humanitarian convoy is a way to test the Ukrainian government’s — and the West’s — response to Russian moves.As a Russian humanitarian convoy moves toward Ukraine, where it is scheduled to cross into the Kharkiv region on Wednesday (13 August) under the auspices of the International Committee of the Red Cross, Russian President Vladimir Putin is meeting with security officials and preparing for his upcoming trip to Russian-annexed Crimea. In Kiev and throughout Western capitals, the humanitarian convoy has triggered fears that a dispute regarding its contents or transportation could provide the pretext for a direct, overt Russian military intervention in eastern Ukraine.

The Kremlin’s decision to send a humanitarian convoy to Ukraine does not, on its own, portend an imminent Russian military intervention under the guise of a humanitarian mission. The convoy is a part of Russia’s strategy to augment the Kremlin’s options as it assesses the evolving situation in Ukraine. Over the coming weeks, political, military and environmental conditions in the region will shift. The Kremlin must assess these upcoming challenges and evaluate when — and perhaps more important, whether — a direct military intervention in Ukraine is its best option. Such an intervention would mean more than supporting the rebels in Ukraine by contributing personnel and arms. It would involve moving the Russian military into Ukraine — in short, an overt invasion.

Weather conditions and the increasingly difficult position of the rebel movement could encourage Putin to intervene directly in Ukraine as soon as possible. In late September and early October, rains combined with cooling temperatures and cloudier skies result in what Russians refer to as the rasputitsa, the time of year when lower water evaporation rates result in muddier conditions. During World War II, the rasputitsa did not prevent operations, but it did slow down some troop movements. Road networks in the region are more developed now, and thus the operational challenges posed by deep mud — especially to military vehicle movements — are not as difficult. Nevertheless, as Russia considers whether to intervene directly in Ukraine and potentially engage directly with the Ukrainian military — which would necessitate some movements off the main roads — the rasputitsa is a factor in the Kremlin’s thinking. Moreover, keeping tens of thousands of Russian troops along the Ukrainian border is an intensive effort and would only become more so as winter approaches.

Another element in the Kremlin’s decision-making is the state of the armed separatist movement in eastern Ukraine. The Ukrainian military’s advance over the past few weeks has allowed it to surround the city of Donetsk, a rebel stronghold, and isolate it from Luhansk. The Ukrainian military is now able to interdict many of the supplies flowing from Russia to militants in Donetsk. By waiting to intervene directly, Russia risks losing its unofficial foothold in Donetsk as surrounded rebels either choose to leave the city — as they did in Sloviansk in early July — or become a much weaker force due to the lack of food and equipment as well as attrition through combat. A direct Russian military intervention would be more effective if deployed in support of an existing rebel force rather than in support of a defeated, dispersed group.

Another factor is Ukraine’s need to come to at least a short-term natural gas deal with Russia’s Gazprom before colder weather arrives in October. Russia’s gas cutoff has prevented Ukraine from using the summer months to refill its storage facilities, and while Slovakia is scheduled to begin reverse flows to Ukraine in September, reverse flows will not fully replace the quantities of natural gas Ukraine has traditionally imported from Russia.

Moreover, Ukraine is scheduled to hold a parliamentary election in October — its first since the fall of Viktor Yanukovich’s government. The unofficial alliance governing Ukraine will thus begin to fragment after the election, making it harder for Kiev to act cohesively and effectively. In October, therefore, Russia will have an opportunity to use energy to get political concessions from Ukraine and to take advantage of the Kiev government’s internal divisions as a result of growing financial pressures without resorting to direct military intervention.

Should Russia choose to launch a direct military intervention in Ukraine, it will incur some costs no matter when the Kremlin begins its operations. The potential for a NATO military response, the economic costs of increased sanctions, the financial costs of managing occupied territories in Ukraine, the instability that comes with domestic opposition to the intervention and Russian military casualties are all factors the Kremlin will weigh carefully.

Russia’s decision to send its humanitarian convoy is a way to test the Ukrainian government’s — and the West’s — response to Russian moves. Moreover, it allows the Kremlin to keep its options open as it carefully assesses upcoming events and the prospects for a direct military intervention in Ukraine.

0 responses to “Russia Carefully Weighs its Options in Ukraine”