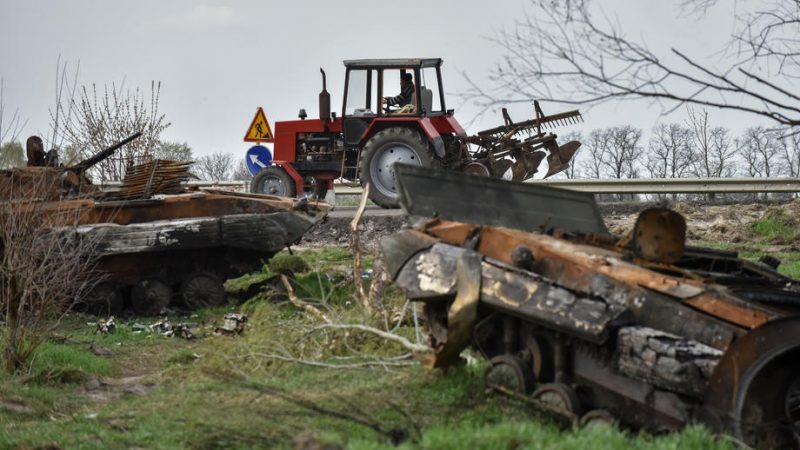 Despite the Russian aggression, Ukraine continues to produce grain and oilseeds and remains an exporter, although crops are exported by land, as Russia has blocked all Ukrainian seaports in the Black and Azov seas, writes Roman Rukomeda.

Roman Rukomeda is a Ukrainian political analyst. This is his 49th account of Russia’s invasion of Ukraine, which he succeeded in sending to EURACTIV despite war-time hardships.

The 69th day of war is coming to an end. Ukraine is successfully deterring the Russian military offensive on the East and South and slowly pushing them back from Kharkiv and its region.

The war itself is coming into the long-haul stage that affects everything. One of the most sensitive spheres which connect the internal situation in Ukraine with global security is the export of food and agricultural products on world markets. The destruction and damage done by Russian terrorists threaten Ukraine and many countries in the world that depend on food imports from the country.

Due to the war, Ukraine, one of the essential suppliers of agricultural products to world markets, will produce a much more modest harvest in 2022. According to the forecasts of the Ukrainian Grain Association, approximately 63 million tons of grain and oilseeds may be harvested in the country this year.

This is almost half the harvest of 2021, which amounted to 106.6 million tons. Accordingly, exports will decline. So far, it is possible to export about 35 million tons of grain and oilseeds by land as Russia has blocked all Ukrainian seaports in the Black and Azov seas. One of the reasons for the reduction in this year’s harvest is the temporary occupation of the country’s southern regions.

Earlier, the invaders destroyed all food warehouses in Severodonetsk. It seems that Russians decided to try repeating the artificial famine that the Soviet Union created during the time of Stalin starting in 1933. The expropriation of food in the occupied territories is a violation of the Geneva Convention relative to the protection of civilians in times of war.

There are plenty of examples of stolen Ukrainian equipment or crops, particularly grain, by Russians. One of the most extreme examples of looting took place in Melitopol – at the site of Agrotek-Invest, the official dealer of the agricultural machinery manufacturer John Deere (USA) in Ukraine.

Russian troops from Chechnya under the rule of Kadyrov stole three new combines, a tractor, and three seeders with a total value of €1.5 million and 20 tons of branded lubricating oils. The company managed to figure out where the Russians took the stolen equipment.

Thanks to the systems installed on the equipment, the experts found that the equipment is located in Chechnya, in the village of Zakan-Yurt, not far from Grozny. In a small way, all the equipment was blocked, so it could not perform its primary functions.

According to the minister of agricultural policy and food of Ukraine, the government estimates that overall crops will decrease by 20-30% compared to last year. Obstacles caused by this war can reduce crop quality and yields per hectare. According to preliminary data, about 20-30% of arable land may remain unsown. Still, the exact figure will be known when the sowing campaign is over at the end of May, the minister said cautiously.

The final amount of foods exported by Ukraine this year will intensely depend on the help and assistance of European neighbours of Ukraine in delivering the crops, especially grain, to world markets.

Ukrainian agriculture and food experts are saying that with one hand, farmers help the Armed Forces to protect the fields, with the other – they sow. The main concern is how much will be the yield and whether there will be fuel to collect crops. But everyone is thinking about victory, peace and food prices.

The main thing is that despite the aggression, Ukraine will not only provide itself with food but will also remain a significant player in the world food market.