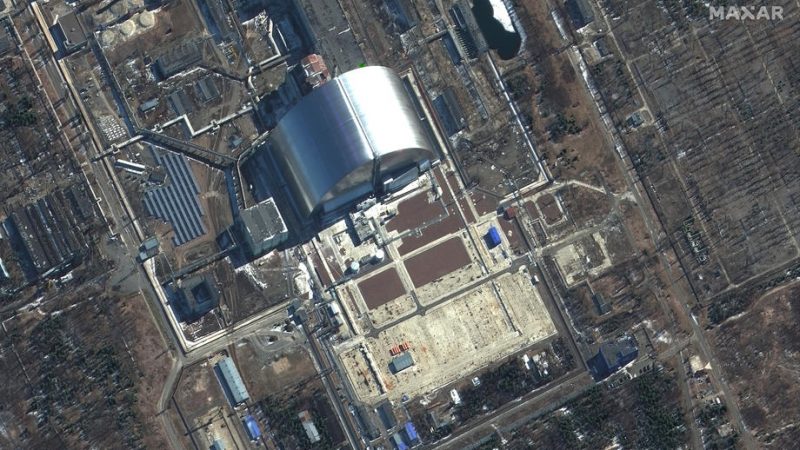 In addition to the reactors spread across several plants, Ukraine has significant radioactive waste dumps, which “could also be nuclear targets” in the current situation. [Handout picture/EPA/EFE]

Ukraine warned that if electric power supplying Chernobyl’s cooling systems is not restored, this could create a radioactive cloud that would blow over Ukraine, its neighbours and the whole of Europe. Unfortunately, the UN agency in charge of atomic energy pays no attention, writes Roman Rukomeda.

Roman Rukomeda is a Ukrainian political analyst. This is his thirteenth account of Russia’s invasion into Ukraine, which he succeeded to send to EURACTIV despite hardships and limited internet access.

One such site is Chernobyl nuclear plant which stunned the world with its catastrophe in 1986. Now Russian war criminals have captured the power station and shut down all the electricity on it, which may cause an even bigger disaster than in 1986.

The Ukrainian intelligence warns Europe and the world about the catastrophic situation with the captured Chernobyl nuclear power plant. A Ukrainian national emergency service agency warned that if electric power supplying the plant’s cooling systems is not restored, this could create a radioactive cloud that would blow over Ukraine, its neighbours and the whole of Europe.

Unfortunately, the International Atomic Energy Agency (IAEA), whose responsibility is to control such sites, is extremely weak and passive in this dangerous situation where the security of the whole of Europe is under threat.

There is an urgent need to send IAEA experts to Chernobyl nuclear power plant and Zaporizhzhya nuclear power station (also captured by Russian terrorists) to save those objects from nuclear catastrophe. Also, in Kharkiv, Russian war criminals are shooting at a scientific experimental nuclear reactor that may cause a nuclear disaster.

Meanwhile, Russian troops got stuck with their military campaign against Ukraine, so they are concentrating on fire against civilians and peaceful cities. The worst situation is in the surrounded city of Mariupol, with a population of 400,000.

Russian war criminals do not allow people to leave the city through “green corridors” by opening fire each time they try it. It is cheating on agreements and a war crime against humanity as children are dying having no medical help, heat or food. In Mariupol itself, more than 1500 civilian people are already killed. Russian criminals continue to use captured people as hostages in their military attacks.

All state services and institutions are trying to find a new mode of operation in the war conditions. For example, in the educational sphere, pupils of Ukraine are now transferring to the online method of learning as many of them are either abroad or have moved away from home.

So, Ukrainian kids will have a chance to continue studying in distance mode until the current academic year. However, more than 100 schools are destroyed by Russian terrorists all over the country. It is also time for European educational institutions to support Ukrainian students who will not be able to apply to colleges and universities in Ukraine because of Russian military aggression and its consequences.

The rest of state institutions are also operating in normal mode to provide as many services to the population in war conditions as possible. The financial system of Ukraine is stable. People are receiving their pensions and salaries in time. Though, there were some restrictions in the banking system during the war period.

Kyiv is also living a relatively normal life despite regular air attacks. The Ukrainian capital is now half-surrounded, and it is almost impossible to get there. At the same time, about two million Kyiv residents are staying in the city trying to help protect the country from Russian aggression or be volunteers around the city.

In general, life in Ukraine continues despite the war and 2.5 million people who left the country since the beginning of the war. But when they will return to the country, their cities and lives will be totally different from before February 2022. And it is a big question of how these people will be able to live these new lives.