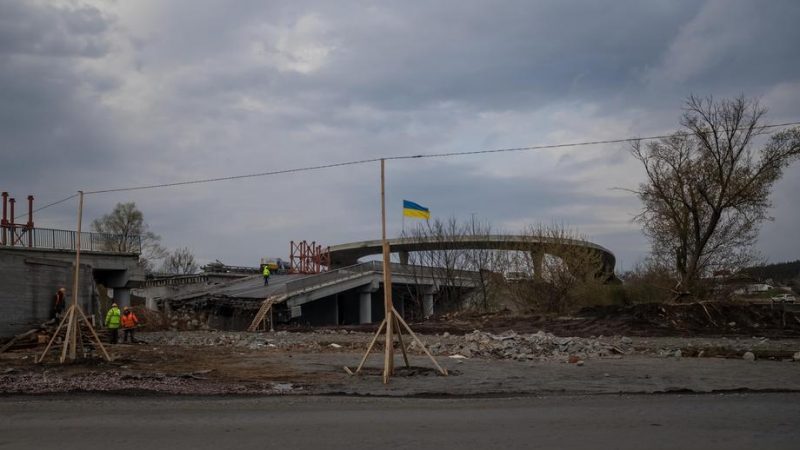 A view of part of a highway affected by Russian attacks, in Kyiv. [EPA-EFE/MIGUEL GUTIERREZ]

There is a great hope for Ukrainians that the increasing military support from NATO and EU countries will change the situation on the front line and launch a Ukrainian offensive, writes Roman Rukomeda.

Roman Rukomeda is a Ukrainian political analyst. This is his 46th account of Russia’s invasion of Ukraine, which he succeeded in sending to EURACTIV despite war-time hardships.

The 60th day of war is coming to an end. It is Orthodox Easter today (24 April). Still, Russian bombs and rockets continue to fall on Ukrainian cities, and Russian promises of an Easter ceasefire turned out to be a lie.

On the battlefronts, the situation is complicated. The three main directions of the Russian offensive are Kharkiv, the East and the South of Ukraine. Russians captured some small villages in the East. At the same time, Ukrainian Armed Forces are trying to push back Russian invaders in the South and have had some minor successes.

Both sides are saving resources. There is a great hope for Ukrainians that the increasing military support from NATO and EU countries will change the situation on the front line and launch a Ukrainian offensive that will push Russians back to their national borders. As many experts note, the Russian army has lost 50% – 90% of its best-trained soldiers and officers.

However, in the Kherson region in the South, Russians put Ukrainian flags on their tanks and shoot at private houses. Russians also try to steal agricultural equipment. For Ukrainian farmers in captured territories, they allowed them to start seasonal works only in the case of giving 70% of crops back to Russian terrorists. Almost all farmers refuse to work in such conditions.

Many people in the Kherson region, having only bicycles as the only transport available, travel towards Ukrainian-controlled territory in the northern part of the region to escape Russian occupation.

Another Russian crime is stealing Ukrainian grain from the captured southern territories. For example, according to Ukrainian National Security and Defence Council Staff, Russians robbed the Novoalekseevsky storage and took the grain to Crimea. This can be confirmed by reports from residents of Sevastopol about the fact that a few days ago, a sea terminal for transhipment of grain began to operate, the stocks of which simply do not exist in Crimea.

Despite eliminating the direct threat of its possible capture, the Ukrainian capital, Kyiv, is continuing defensive work to be ready for any potential hazards in the future. The subway started to work, and about half of the businesses and services have begun to operate.

Ukraine’s national economy, despite the heavy losses, is also slowly reviving. For example, Zaporizhzhya Metallurgical Plant “Zaporizhstal” operates at 40%-50% of its capacity after a partial resumption of production.

Their Russians are still trying to destroy the city of Mariupol and kill all its defenders and innocent civilian population. According to the city’s mayor, about 100,000 civilians are still in the city, asking for evacuation and help. Despite that urgent request, Russians again denied evacuation corridors today.

Soon the situation in Ukrainian South and East will change, and Russian terrorists will flee as they previously did from the northern regions of Ukraine.