‘Russians know they are killing civilians, not the military’ 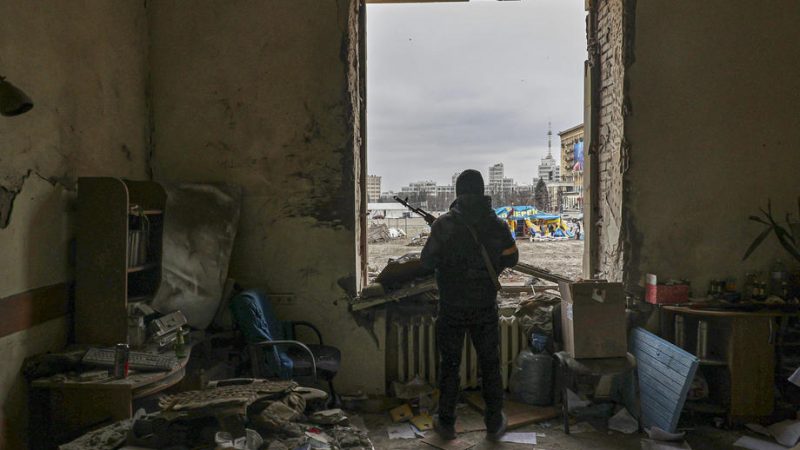 A member of the Territorial Defense Forces of Ukraine stands inside the damaged Kharkiv regional administration building in the aftermath of a shelling in downtown Kharkiv, Ukraine, 1 March 2022. [EPA-EFE/SERGEY KOZLOV]

During the sixth day of Russia’s invasion of Ukraine, the army continues to fire rockets and multiple launch rocket systems at the Ukrainian cities of Kharkiv, Chernihiv, Sumy, Mariupol and others with full knowledge they are killing civilians, not military, writes Roman Rukomeda.

Roman Rukomeda is a Ukrainian political analyst. This is his fifth account of Russia’s invasion into Ukraine, which he succeeded to send to EURACTIV despite limited internet access.

The sixth day of the war in Ukraine did not bring any significant successes to Putin’s army of war criminals. Aggressors did not manage to capture any of the prominent Ukrainian cities. Instead, they engaged in the maximum destruction of civilian infrastructure.

By Tuesday, the Russian aggressors had already killed more than 20 children and ruined 80 kindergartens, schools, colleges and social-educational objects. They are purposely aiming at hospitals, like in Kharkiv, to cause as many civilian deaths as possible. They have also shot the biggest city square in Europe with ballistic missiles – Kharkiv’s Square of Freedom, killing innocent people.

Russian war criminals shot two ballistic rockets on Tuesday evening at the Kyiv television centre. They failed to destroy it, but they managed to kill five innocent Ukrainians who were passing the TV centre during the explosion.

Close to the TV centre, the aggressors hit with a rocket one of the most tragic monuments in Kyiv – Babiy Yar – the place where during WWII, thousands of Jews, Roma, Ukrainians and other nationalities were killed by German Nazis. Eighty years after that tragedy Russian murders attacked the graves of these people again, repeating the despicable crime.

During the whole day, Russian terrorists continue to shoot with rockets and launch multiple rocket systems at Ukrainian cities such as Kharkiv, Chernihiv, Sumy, Mariupol and others, knowing perfectly well that they are killing civilians, not military.

Such actions of Russians are crimes against humanity and a terrible violation of international humanitarian law. After the end of the war, it is a matter of principle, and respect to the victims of the war and fundamental human values, to press charges and punish the Russian war criminals in an international tribunal.

At the same time, there are no signs of big panic in any of the major Ukrainian cities. People adjust to the new reality, periodically sleeping and helping each other in the shelters from bombs. In many cities and towns, due to the lack of places in territorial defence, which is a part of the Armed forces, the average citizens create local groups of self-defence, checking all suspicious behaviour around their houses.

Sometimes people detect special marks left by Russian terrorists and sabotage groups for future bombings. There is severe punishment for the marauders who sometimes dare to rob empty houses and apartments. People catch them and tie them to the electric poles along the road until the police arrive.

There are barricades on all possible roads in all the cities and towns, making it impossible to get to the city and towns without special checking.

This is a necessary measure to secure locations from sabotage groups who are armed and periodically kill innocent people, police officers and others in their attempts to raise panic and chaos. Local defence units kill such terrorists in the majority of cases. Many such groups again show that the Russian terrorist state planned the aggression against Ukraine for a very long time.

People in Kyiv and elsewhere demonstrate growing empathy and kindness to each other. Especially mothers with small children are supported with food, medical help and all necessary staff.

Besides, Ukraine now started to meet groups of military volunteers and serious support by weapons and other means from all over Europe. Our country must feel the support of the free and democratic world and receive the necessary resources for further victory over the Russian aggressor.

One more moment needed to be mentioned – Belarus has started sending its troops to Ukrainian territory, joining the war against Ukraine. Before, Belarus gave its entire territory to Russian war criminals to attack Ukraine and provided the platform for launching Russian ballistic missiles on peaceful Ukrainian cities.

This is a war crime of the self-proclaimed dictator of Belarus Aleksander Lukashenko and his minions, who shall be sitting in the international military tribunal close to Putin. However, it is also a great shame to Belarus people who silently watch how their military forces join Russians in killing Ukrainians.

Finally, Europe and the world understood that Russia as a terrorist state threatens security, peace, and prosperity globally.

But the primary fight with the Russian aggressor is done by Ukrainians and their blood.