‘The ashes of Bucha are burning in our hearts’ 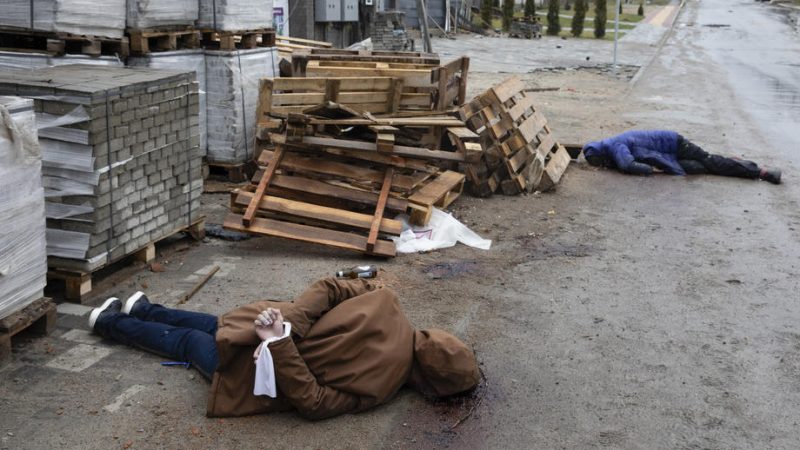 Bodies of Ukrainian civilians killed in the Russian invasion lie on a street in the small city of Bucha of Kyiv area, Ukraine, 3 April 2022. Some cities and villages had recently been recaptured by the Ukrainian army from Russian forces. [EPA-EFE/MIKHAIL PALINCHAK]

After the massacre of the Ukrainian population in Bucha, Irpin, Vorzel, Chernihiv, Kharkiv and Mariupol, the EU should completely disconnect Russia from SWIFT, close all their ports to Russian ships, freeze and seize all the Russian assets, and charge Putin as a war criminal, writes Roman Rukomeda.

Roman Rukomeda is a Ukrainian political analyst. This is his 32nd account of Russia’s invasion of Ukraine, which he succeeded to send to EURACTIV despite hardships and limited internet access.

The 39th day of war is coming to an end. Ukraine and the whole world are horrified by the scenes of the destroyed towns around Kyiv and the Russian beasts’ crimes. It is impossible to believe that such crimes could be committed in the middle of Europe against a peaceful civilian population.

The picture emerging from the small towns of Bucha, Irpin and Vorzel surrounding Kyiv on its western and northern borders is horrific. There are graves with more than 200 peaceful civilians with tied hands and bullets in their heads. There are naked and burned bodies of Ukrainian women that were raped, sometimes in the presence of their family members and children.

Some of these bodies were crushed by Russian tanks. In such a way, Russian beasts tried to hide the signs of their crimes. Almost all the children and men are killed in these towns. Many bodies are mined.

Russian military hordes also mined and destroyed local cemeteries. Hundreds of dead civilians are just lying on the streets. This massacre and nightmare could previously only be seen in the worst horror films. Now it is done in Ukraine by Russians.

Aside from that, before retreating from Kyiv and Chernihiv regions, Russian invaders robbed and pillaged hundreds of houses. They loaded their tanks and armoured vehicles with looted belongings of local people. They were boasting with plundered loot on intercepted telephone calls to their wives and parents.

Some of them managed to reach the territory of Belarus, where they started selling these belongings to locals who knew about the nature of these things. That is also a characteristic of those Belarusians who are now supporting the Russian genocide against Ukraine. It is also one of the proofs for the future international tribunal on Russia, where Belarus will be reviewed as the direct assistant of all Russian crimes.

The ashes of Bucha, Irpin, Gostomil, Mariupol and other destroyed Ukrainian cities are burning in our hearts. Russia is not only the terrorist state that threatens to lives of all Europeans, but it is the fascist beast of the 21 Century that must be immediately stopped, or else it will destroy the civilization in our world.

All those European politicians from France, Germany, Hungary, and some other European countries discussing the necessity to have further relations with Russia now shall decide for themselves.

They are either becoming the assistants of the mass murderers and crimes against humanity done by Putin and his armed horde, or they ought immediately to stop contact with the main fascist and terrorist of the 21 century – Putin.

After the genocide of the Ukrainian population in Bucha, Irpin, Vorzel, Chernihiv, Kharkiv and Mariupol, the EU and NATO, who received the proof and evidence of mass massacres of the Ukrainian civilian population, should completely disconnect Russia from SWIFT, close all their ports to Russian ships, froze and arrest all the Russian assets, and charge Putin the as a war criminal and crimes against humanity.

Military and financial help to Ukraine should seriously increase so it will finish the war in the quickest way – with Ukrainian Armed forces pushing the Russians back to their borders. The new international tribunal on Russia and its crimes in Ukraine now is a matter of European dignity and justice.

After all these crimes are done in Ukraine by Russian aggressors, the picture is black and white. There are no more places for manoeuvres. European societies who still believe in democracy and human rights values must demand from their politicians to completely isolate Russia and break any ties with these terrible war criminals in the Kremlin and their armed forces.

There are no shadows of grey anymore. Either Ukraine and Europe will stop the worst antihuman Russian criminals in the history of the 21 century, or the whole European life, security, and welfare will be destroyed. If Ukraine falls, the next victims of Russian beasts will be NATO and EU members in Eastern Europe. It’s time to destroy Russian fascism, so it will never revive again.