The Brief – Hundred days in hell 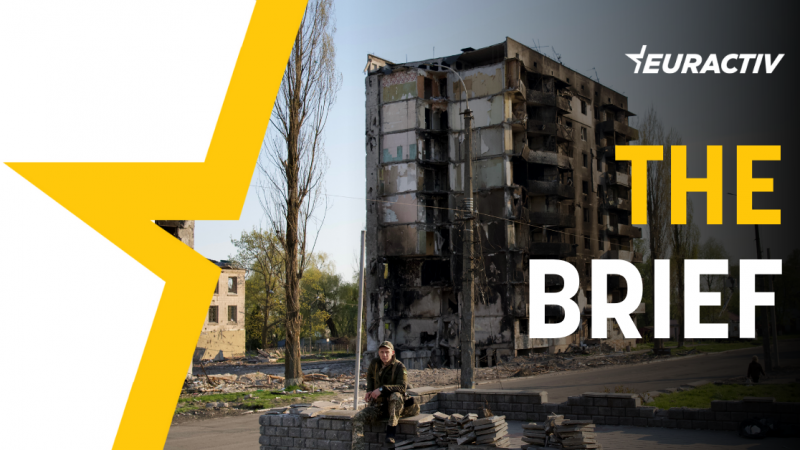 A festering wound will remain even when the war ends. [Alexandra Brzozowski]

Saturday marks 100 days since Russia launched its full-scale invasion of Ukraine, and as things stand, we might be in for the long haul.

What has Putin achieved since 24 February?

Not much when you consider he wanted to conquer the whole of Ukraine, including Kyiv, in three days.

Ukrainian President Volodymyr Zelenskyy’s government has not fallen. On the contrary, in the battle of narratives, he has emerged as communicator-in-chief and a global symbol of democratic resistance.

He has arguably strengthened both NATO and the EU, with the latter surprising many observers by demonstrating how seriously and quickly it can move in foreign policy matters.

And the Ukrainian army has not been ‘demilitarised’ but instead receives steady Western weapons supplies.

Earlier this week, US President Joe Biden confirmed that long-range multiple launch rocket systems, or MLRS, were on the way, which Ukrainians have requested for a long time.

This comes with one caveat: Kyiv had to promise not to fully exploit their possibilities, namely not to fire them into Russia.

While some analysts have suggested the new weapons systems could be a “game-changer”, others caution that they should not be expected to suddenly turn the tables because Ukrainian troops need time to learn how to use them effectively.

Still, they are likely to improve morale after 100 days of war.

But Russia currently occupies about 20% of Ukrainian territory, and Russian troops are gaining ground in the Donbas. In addition, according to Zelenskyy, the front line stretches over 1,000 kilometres.

The results of the war are bitter: Seven million people have fled Ukraine for other European countries, according to the United Nations High Commissioner for Refugees (UNHCR), while more than 2.3 million have since returned, hopeful the war might soon find an end.

Images of murdered civilians, bombed-out buildings and traumatised children sent shockwaves around the world. EURACTIV has seen first-hand what it means when a city is ‘liberated’ by Russian troops, and there may be more examples of this yet to be discovered.

Zelenskyy, on the other hand, speaks of around 100 Ukrainian soldiers killed and several hundred injured every day.

Even when the war ends, a festering wound will remain and take a long time to heal.

How long both sides can continue this war of attrition is unclear.

Worries are emerging that we might see a ‘Syrification’ of the war, turning it into a long-term frozen conflict, where fighting will become the norm and a fact of daily life.

Meanwhile, repercussions are felt worldwide, be it with rising energy prices or a looming food security crisis.

Senegalese President Macky Sall, currently chairing the African Union, is heading to Sochi this Friday, after a short stint in Brussels,  to implore the Kremlin chief to release the grain and fertilizer stocks Russia holds hostage with its Black Sea blockade.

But the prospects for a solution here look rather grim. Putin will set a price the West might not be able to pay, namely the lifting of Western sanctions.

Although it indeed took the EU27 longer than expected to green-light the sixth sanction package on Russia, and the process for the next one might prove just as laborious, pressure on Moscow is unlikely to cease.

Quite possibly, Putin believes his propaganda and food scaremongering will fall on fertile ground beyond Europe’s borders and slowly help to sway big parts of the food-impacted world in his favour.

For the EU, the bigger challenge in the coming months might not be to maintain the support for Ukraine, which has already settled into a steady flow of weapons and humanitarian aid, but how not to lose against Putin’s global propaganda push toward third countries.

A child protection crisis in the EU.

All children fleeing the war in Ukraine deserve protection from the risks of human trafficking and access to essential services. Eurochild is urging the European Union to ensure all children are properly registered and supported when they cross the border.

Lawmakers are gearing up for a cliff-hanger vote on the EU’s proposed carbon border adjustment mechanism (CBAM) next week after the European Parliament’s main political groups failed to agree a common stance on when the new scheme should start to apply.

As of Friday, 500 patients have been transferred from Ukraine, Moldova, and bordering EU member states to hospitals around Europe so they can receive continued treatment or urgent medical help, the European Commission has announced.

Meanwhile, negotiators struck a provisional deal on the EU’s agricultural statistics review on Thursday (2 June) after more than a year of discussion on the controversial file, although for environmental campaigners, the agreement leaves a lot to be desired.

Online video sharing platforms such as YouTube could be liable for content uploads that infringe copyrights if they fail to act immediately, according to a ruling from Germany’s top court on Thursday (2 June).

While the follow-up to the Conference on the Future of Europe (CoFoE) remains uncertain, local and regional authorities are calling on the EU to grant them a bigger role in the implementation of the citizens’ recommendations.

In other news, Bulgaria’s four-party ruling coalition is not united on the issue of the country’s accession to the eurozone in early 2024, splitting along the same lines as with the unrelated issue of vetoing the start of neighbouring North Macedonia’s EU accession talks.

Last but not least, have a look at Tweets of the Week and check out the latest edition of the Agrifood and Tech Briefs.