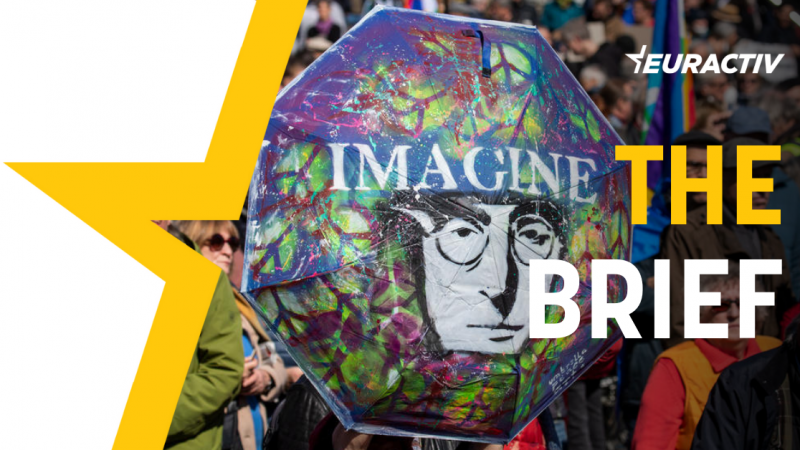 Several EU leaders have voiced ideas for a ceasefire and peace agreement in Ukraine, but Kyiv dismissed them out of hand, comparing them to the attempts to appease Hitler in 1938.

Peace is, of course, the greatest value. But obviously, there are different views on what price and in what circumstances peace in Ukraine could be achieved.

The most elaborate peace plan comes from Italy’s Mario Draghi. It builds on political ideas expressed by France’s Emmanuel Macron and Germany’s Olaf Scholz. Macron’s basic idea, which infuriated Kyiv, was that any peace agreement should not humiliate Vladimir Putin and that Russia would receive territorial concessions.

Scholz’s idea was basically to keep Crimea, which Russia annexed in 2014, out of the future talks, to avoid complications. For Kyiv, Crimea is Ukraine.

Macron’s comments have signalled a European approach contrasting with that of the US. Across the Atlantic, US Defence Secretary Lloyd Austin has said he wanted the endgame of this war to be a Russia weakened and unable to recover, while President Joe Biden has called Putin a war criminal.

Such rhetoric, by the way, is hardly conducive to peace talks.

In the EU, the usual suspects – Poland, Lithuania, Latvia, and Estonia – strengthened by having been proved right in their analysis of the true nature of Putin’s Russia, stick closely to Kyiv’s, and Washington’s, position: this is not the time for peace talks, Ukraine can win this war.

In contrast, Rome, Paris and Berlin are sceptical about Ukraine’s ability to win (and are not doing much to help).

On the ground, in recent days, the Russian army has had some successes. In a nutshell, the Rome-Paris-Berlin approach is that instead of taking risks, including a possible nuclear war, peace should be negotiated now, at the price of territorial concessions. This means that Ukraine would lose more territories than those its pro-Russian separatists seized in 2014.

There is no positive response from Russia to such a plan because ever since the beginning, the mistake of all commentators (yours truly included) has been making forecasts based on the presumed Russian interest. In the meantime, Putin has moved all his pawns, including starting the invasion, in absolute disrespect of such a consideration.

If you still trust such commentators, the perceived interest of Putin is that this war should end before things get out of control. The Russian propaganda machine will declare victory, but who cares? The nuclear holocaust will have been avoided.

And the perceived interest of the US is that this war is very good business for them.

The Ukrainian public opinion is close to the US perspective. More than 80% of Ukrainians believe their country should not cede an inch of its territory to Russia in exchange for peace.

If Macron thinks Putin should be pacified by receiving territories, Ukrainians suggest that France offers him Strasbourg instead.

And Ukraine remembers that similar peace arrangements with Russia (the Minsk Protocol, with French and German help) managed only to freeze conflicts until Moscow decided to re-ignite them.

One thing is clear: discussing a ceasefire and a peace agreement right now is unrealistic. In military terms, Ukraine and Russia are now trapped in a long-haul, low-intensity conflict that may last long.

Russia may hope for better organisation of its potential, while Ukraine counts on the motivation of its armed forces, as well as on continued Western support for receiving superior military equipment.

The risks are obvious, for both sides. For Ukraine, the risks are that militarily, Russia would eventually achieve more victories, with more Ukrainian territories and lives lost. In such a scenario, Kyiv may come to regret the rejected prospects.

For Russia, the risks are that should Ukraine score more victories, this huge country would be shaken in an unprecedented way, incomparable to anything since 1917.

In such a scenario, if Russia loses badly, the risk for the world is that Putin could resort to nuclear weapons. In the same way a cornered dog launches a desperate attack at the assailant’s throat.

There are many manifestations in support of Ukraine worldwide. In most of them, Putin is called a killer or a reincarnation of Hitler, but few mention the word “peace”.

Despite the considerable risks, obviously, this is not the time for peace talks.

Despite the war in Ukraine, the Green Deal, which is aimed to make the EU climate neutral in 2050, must remain a key priority of the agricultural sector, said Czech agriculture minister Zdeněk Nekula.

Russia is advancing a new law allowing it to take control of the local businesses of western companies that decide to leave in the wake of Moscow’s invasion of Ukraine, raising the stakes for multinationals trying to exit.

Advancing Russian forces came closer to surrounding Ukrainian troops in the east, briefly seizing positions on the last highway out of a crucial pair of Ukrainian-held cities before being beaten back, a Ukrainian official said on Thursday

EU agriculture ministers agreed to implement a bird flu vaccine strategy as the bloc struggles with the most violent outbreak in its history.