The Brief – Six o’clock after the war 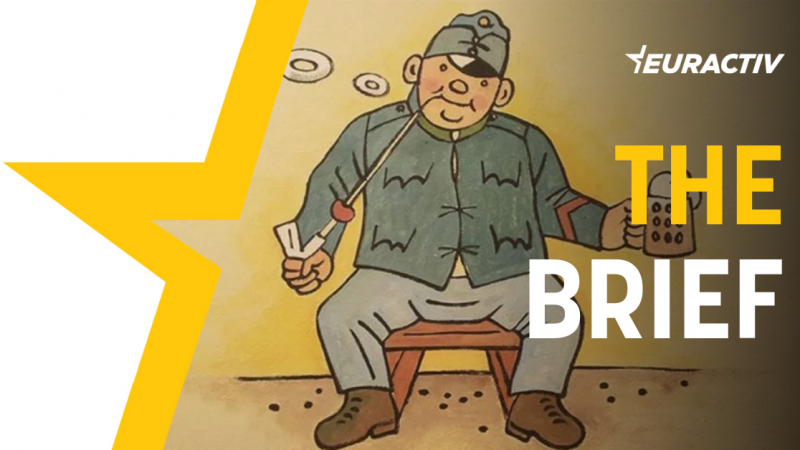 The Good Soldier Švejk by Jaroslav Hašek, first published in 1921, remains a timeless and unsurpassed anti-war satire. It’s the most translated work of Czech literature. I read it first in Bulgarian when I was nine, although it’s not a children’s book. Today I would like to share my favourite excerpt.

The main protagonist, infantry soldier Švejk, who in his civilian life was a dealer in stolen dogs in his native Prague, speaks to sapper Vodička.

“When the war is over, let’s see each other”, said Švejk. You will find me every day after six o’clock in “At the Chalice” (a pub that has since become iconic).

“Then, see you after the war, at six o’clock in the evening,” Vodička said.

“Better come at six-thirty to be safe if I’m late,” Švejk replied.

The last time I thought of this passage was during the Yugoslav war of 1999 when I was reporting from Belgrade.

The Good Soldier Švejk is very popular in Serbia and across the Balkans. The good-humoured and simple-minded Švejk has always been a symbol of popular wisdom and resilience so much stronger than the destructive force of war-mongering politicians, who did not deserve the honour to be protagonists of the novel.

In late May 1999, I had chosen a pub in Belgrade to meet with friends “at six o’clock after the war”. But I was arrested on 25 May (for taking too many photos and asking too many questions) and ordered to leave the country within 48 hours. So I missed the end of the war, which came days later, on 10 June.

On my way back from Belgrade to Sofia, on 26 May, a US plane bombarded the bridge I was crossing. I escaped unscathed but developed a supernatural sense for locating aeroplanes as if I were a radar. Thankfully, this sixth sense lasted only two days after the shock, and today I’m no longer damned with such a ‘talent’.

The Ukraine war will also end – hopefully soon. Pundits say Vladimir Putin cannot afford to wage war beyond 9 May, Victory Day in Russia, which makes a lot of sense. This war is against everybody’s interest, including Putin’s – but he chose to self-inflict his worst defeat in almost 23 years in power on himself.

Now the time has come for his diplomats and propagandists to whitewash his defeat into triumph. Once they are ready, we shall have peace.

The problem, of course, is that until this happens, there is a risk that many innocent lives will be lost. A ceasefire in expectation of a peace agreement is desperately needed, as well as credible mechanisms to enforce it.

The story of The Good Soldier Švejk remained unfinished because Hašek died soon after completing volume four (of the planned six) in 1923. Another Czech author, Karel Vaněk, took over the sequel and imagined what Švejk and Vodička did to make sure they kept their appointment at six o’clock after the war.

For my part, I will make sure I come to my favourite pub at six o’clock after the war. Maybe Švejk will show up as well.

Albanians have been protesting for more than a week over price increases of food, fuel, and energy. The government, however, has called them a national shame and said their protests were serving Russia and the Kremlin – a claim activists have entirely dismissed.

European cloud players, including France’s OVHcloud, have brought a new case before the European Commission, claiming that US-based giant Microsoft is engaging in anti-competitive practices on the market. EURACTIV France reports.

Russian forces in Ukraine are blasting cities and killing civilians but no longer making progress on the ground, Western countries said on Thursday, as a war Moscow was thought to have hoped to win within days entered its fourth week.

Russia has rejected the ruling that they must cease all military operations in Ukraine, which was ordered by the International Court of Justice in the Hague, according to a statement from the state-controlled news agency, TASS.

With Europe planning to end its reliance on Russian gas as quickly as possible, Norway, the second-largest gas exporter to the EU, “wants to actively contribute to the rapid development of the hydrogen market in Germany” and on the continent.

With the Commission due to present the Sustainable Products Action Plan to the Council on 30 March, the secretary-general of the confederation representing the interests of the bloc’s recycling industry takes stock of the circular economy in Europe in an interview with EURACTIV France.

At the start of his term, French President Emmanuel Macron promised to increase gender equality. However, progress has been “largely insufficient” despite the implementation of several concrete measures, a report recently published by NGO Oxfam France has found.

Don’t miss our Economy Brief, which talks about what Ukraine’s battered economy needs now and in the future.