The Brief – The Great Communicator 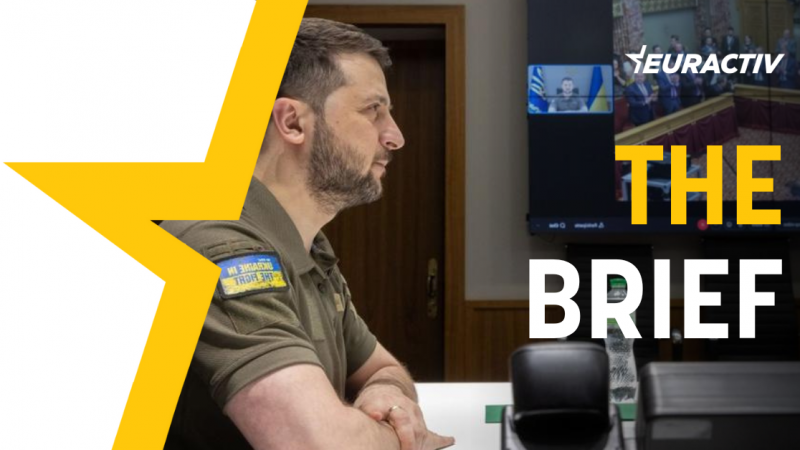 The war in Ukraine has elevated Volodymyr Zelenskyy, until recently a political outsider, to the status of a great leader of the Ukrainians and a symbol of courage for the whole world.

Dressed in his trademark khaki sportswear, addressing online audiences ranging from leaders’ summits to the Grammy awards, Zelenskyy has become a familiar face in every household on every continent.

Zelenskyy is probably the most influential person in the world right now. At least he topped the ranking of the 2022 TIME READER POLL.

In each speech, tailormade to each audience, Zelenskyy prepares a historical allusion, a reference to well-known traumatic events in each country’s history, to generate empathy with the suffering of Ukrainians.

In a speech to the British parliament, Zelenskyy invoked London’s Second World War Blitz. In the address to the US Congress, he referred to Pearl Harbor. Beaming into the German Bundestag, he referred to the Berlin Wall.

There has been one case when the reference he used, namely the Holocaust, speaking to the Knesset, was criticised as inappropriate, but in general, Zelenskyy was rated highly by audiences worldwide.

Where he was less successful as a communicator is in public diplomacy involving key leaders from the EU.

Like his ministers, Zelenskyy has publicly criticised French President Emmanuel Macron for his (repeated) position that Europe should avoid humiliating Putin.

Zelenskyy implied that Macron wants to save Putin’s face by paying with Ukrainian territory, allegations he Elysée rejected.

With Germany, a low point was reached when Ukraine refused the visit of President Frank-Walter Steinmeier.

Zelenskyy has also publicly criticised Germany for holding back arms and ammunition. While this was a fair point, the diplomatic snub of Steinmeier was an insult to Berlin that stuck.

Kyiv expects that the EU summit on 23-24 June will grant Ukraine the status of candidate for EU membership.

However, this author of the Brief thinks that Zelenskyy is giving arguments to Paris and Berlin that may convince them such a decision is premature.

It is harder to join a family if you publicly squabble with some of its members (and the most powerful ones at that).

Turkey’s Recep Erdoğan has constantly lambasted most of his EU counterparts, and his country’s EU accession procedure has been put in the deep freeze.

Diplomats have told me that Zelenskyy’s tone vis-à-vis his EU counterparts is not conducive to a decision that such a person (albeit very courageous and very popular indeed) should sit at the same table.

Many countries in the EU support Ukraine’s fast-track EU membership. But Paris and Berlin are likely to decide that a promise for Ukraine’s EU accession in the current phase of the war would be a further step towards escalation and, therefore, will not issue a favourable decision.

It’s interesting to see if Macron will visit Kyiv before the French presidency of the EU Council ends on 30 June. There is still time, exactly three weeks.

German car associations were up in arms following the European Parliament’s support on Wednesday of a de facto ban on the sale of new combustion engine cars as of 2035, a pivotal part of the European Commission’s long-term policy goal of becoming climate neutral in 2050.

At a time when Europe needs to step up its defence, Romania’s former economy minister suggested privatisation as a possible solution to the country’s public sector arms industry desperately trying to regain ground.

EU Justice Ministers adopted a regulation on Thursday to establish a digital cooperation platform for Joint Investigation Teams (JITs) but made the new platform inaccessible to customs offices.

Due to concerns over provisions that could, in their view, lead to the death of the gig economy, lawmakers from Renew Europe and European People’s Party filed similar amendments to the platform workers directive to push back against the rapporteur’s draft report.

The European Innovation Council (EIC) will provide €20 million in funding for Ukrainian startups just days after an MEP launched an investigation into the problems that have plagued the body since its launch.

Meanwhile, the European Union urged Algeria on Thursday to reverse its suspension of a cooperation treaty with Spain, urging dialogue to resolve the dispute over Spain’s support of autonomy instead of full independence for the Algerian-backed Western Sahara region.

In other news, Kazakh authorities are aware of the public discontent and are trying to respond, political analyst Anastassiya Reshetnyak told EURACTIV, after they initially tried to stigmatise protestors as terrorists.

The EU’s minimum wage directive and what it means for workers, as well as the Open Balkan Initiative and how Russia’s foreign minister is involved are discussed in EURACTIV’s Beyond the Byline.