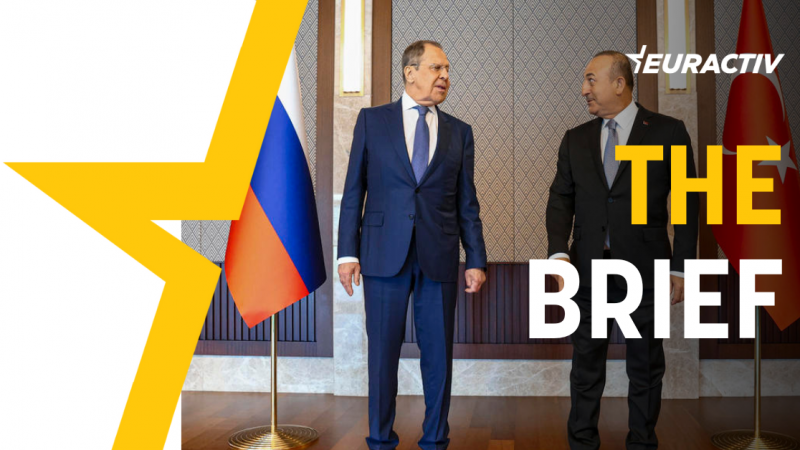 Since the beginning of Russia’s war in Ukraine, Turkey has repeatedly tried to act as a mediator, but what does Ankara hope to win from it?

It is remarkable how Turkey, a country that claims to aspire to join the EU one day, is currently positioning itself vis-à-vis Russia.

In fact, through a skilful balancing act, it has maintained close ties both with Ukraine and Russia. It has criticised Russia’s invasion of Ukraine but has not aligned with Western sanctions on Moscow.

There have been attempted peace talks with Russian and Ukrainian delegations on Turkish soil.

Turkey has also activated the Montreaux Convention and thus blocked the passage of foreign warships, including Russian ones, through the Bosphorus.

At the same time, Ankara sells to Ukraine Bayraktar drones, which are, according to military experts, among the best unmanned aerial vehicles on the market.

After an airspace denial thwarted his planned visit to Serbia this week, Russia’s Foreign Minister Sergey Lavrov has now paid a visit to his Turkish counterpart Mevlüt Çavuşoğlu.

The two were meant to discuss a plan that could allow Ukraine to export its grain through the Black Sea to global markets and hopefully help to defuse the escalating food crisis.

An estimated 22 million tons of grain are currently sitting in silos in Ukraine.

Ankara has emerged as the best-placed actor to establish a UN-led mechanism to create a secure corridor to ship Ukrainian grain while at the same time giving space to the Russians to export food and fertiliser.

Turkey could facilitate and protect the transport of the grain in the Black Sea, Turkish officials suggest. Defence Minister Hulusi Akar said on Tuesday (7 June) that technical details were still being worked out.

“Our efforts are continuing concerning the technical planning on such issues as how it will be done, how the mines will be cleared, who will do it, how the corridor will be established and who will escort (ships),” Akar said.

But clearing mines might prove more than just a ‘technical’ issue since demined maritime areas around Ukraine’s coast could present an opening for Moscow to launch an attack, should it decide to do so.

There is also another thing to keep in mind: If such a deal is to be facilitated by Russia and Turkey in the near future, what would it mean that a large amount of Ukrainian wheat is under the control of Putin and Erdoğan?

For Erdoğan, any success in the Ukraine mediation, whatever form it might take, would be without question a big triumph that he could use domestically before the presidential elections next year.

Of course, Ukraine is not the only topic on the agenda of the Lavrov-Çavuşoğlu talks.

They are also expected to focus on Ankara’s plans to launch a new cross-border offensive in northern Syria against the Syrian Kurdish militia that Turkey considers to be a security threat.

The bottom line here is that Turkey needs Russia’s blessing to continue its presence and operation in northern Syria, although the two support opposite sides in Syria’s civil war.

Another elephant in the room of Lavrov’s meeting is, of course, Sweden and Finland’s bid to join NATO.

Turkey, a member of the alliance, has voiced opposition to the Nordic countries’ accession citing their alleged support of Kurdish militants.

Incidentally, Moscow has also objected to their candidacy — and this small but important detail may play an important role in discussions concerning Ukraine and Syria.

Ukraine, energy security, defence and cybersecurity and economic and democratic resilience top the political agenda when the Czech Republic takes over the rotating presidency of the EU Council starting 1 July, according to an internal document obtained by EURACTIV.

The European Parliament voted to reject a proposed reform of the EU carbon market, the Emissions Trading Scheme (ETS), as lawmakers on the left and right wings of the Hemicycle traded accusations on Wednesday.

In her first significant media appearance since the end of her political career, former German chancellor Angela Merkel defended her controversial Russia policy on Tuesday and denied that she tried to appease Russian President Vladimir Putin.

The EU’s food safety agency, the EFSA, put the EU marketing authorisation of cannabidiol oil (CBD) as a novel food on hold on Tuesday, stating the current data is too insufficient to determine its safety.

Meanwhile, every product produced and sold in Germany will soon have to indicate the conditions under which animals were kept, according to plans presented by the German Agriculture Minister on Tuesday.

In other news, with the world facing an almost unprecedented energy crisis, the International Energy Agency (IEA) at its 7th Global Energy Efficiency Conference has sought to convince policymakers worldwide of the merits of energy efficiency policies while providing a policy toolkit to go with it.

Last but not least, check out our Green Brief and the Health Brief.