The Brief – Why Putin cannot win 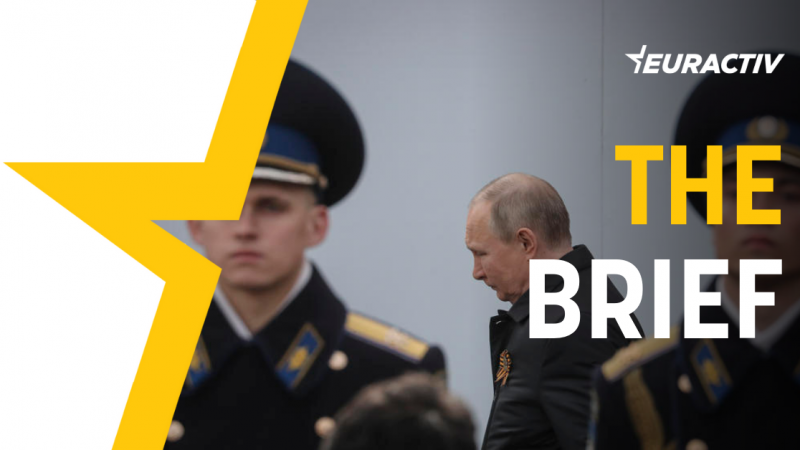 Vladimir Putin’s 9 May speech was highly anticipated. The general expectation was that he would double down on his war effort in Ukraine and sternly warn the West against further interference in what Russia considers its backyard.

But Putin’s speech was relatively tame, which is good news.

He called his undeclared war a “preventive” operation against an “aggressor” plotting against Russia and said Ukraine was trying to regain Crimea by force (though no such evidence exists). He also spoke of impending victory, reminding us that, historically, Russia has apparently defeated invaders.

Nostalgia is state policy in Russia. Putin even mentioned the 1812 battle of Borodino, won by field marshal Mikhail Kutuzov against Napoleon.

But these are mere details.

What is important is that Putin didn’t double down, he didn’t accuse the West of waging war by proxy, he didn’t declare total war officially (thus no general mobilisation), he didn’t mention the “de-Nazification of Ukraine”, and he didn’t warn against a nuclear holocaust.

This is all good news.

There is a slim chance Putin could be waking up to reality, although we cannot really be sure.

As we see it, the reality is the following: It is in the best interest of Russia to end this war, quickly. Putin cannot win because he has mobilised the entire West against him and because the West has started smelling victory.

The West is supplying Ukraine with the weapons of the 21st century, while Russia fights with World War Two-style memorabilia.

If Putin had been reading Tom Clancy’s spy novels (this writer of the Brief re-reads them), he would have been warned about the technological progress in the Western armies and about the capacity of small, well-trained units equipped with state-of-the-art weaponry to stop and even destroy entire columns of tanks.

This is essentially what is happening in Ukraine.

Western armies, even in most countries of the former Soviet bloc, have made big progress toward professional hi-tech warfare, as opposed to the cannon fodder we see on TV, marching on Red Square next to nuclear missiles that cannot be used because, in such hypothesis, there would be no winner.

Putin’s army, marching on the Red Square, is not in a good shape. His face in this photo suggests that he knows it.

What has become apparent since 24 February is that the Russian army has preserved the worst of its legacy – the poor logistics, the inadequate pay, the hazing, the absence of democratic control, and the arrogance of often incompetent officers.

It is not a surprise that such soldiers, sent to Ukraine, are looting the civil population and that their superiors are turning a blind eye.

A long-haul war would further expose these weaknesses, which just cannot be fixed in a short time. And indeed, a long-haul war is a more realistic scenario than a rapid diplomatic settlement.

For a hypothetical peace agreement, face-saving for Putin is a prerequisite but this seems to be an unlikely compromise. Both in Kyiv and in Washington, the zero-sum mindset prevails.

And it is very difficult to say what is the mindset in the EU. Hopefully, on its anniversary, 52 years of the Schuman Declaration, the EU will ponder its role.

Just a reminder: This war is in Europe, and the EU was created to prevent war.

European Council President Charles Michel, who made a surprise visit to Odesa on Monday, was forced to break off a meeting and take cover when missiles again struck the southern Ukrainian city, an EU official said.

Russian President Vladimir Putin told his armed forces on Monday they were fighting for their country at a parade of Russian firepower in Moscow, while his troops stepped up their 10-week-old assault on Ukraine.

One in three EU countries opposes launching a procedure promoted by the European Parliament to change the bloc’s treaties, according to a joint document seen Monday by journalists.

The collapse of the international agency responsible for Palestinian refugees due to chronic underfunding by UN countries could lead to unpredictable consequences in an already unstable region, experts and officials warn.

In other news, a European Health Data Space (EHDS) could enormously impact health research if it can overcome barriers to cross-border secondary use of health data and create trust amongst citizens, according to a Finnish health data stakeholder.

Hamburg is looking for solutions to reverse the trend of disproportional retail sector growth, while other sectors such as culture and leisure struggle, Dorothee Stapelfeldt, Senator for Urban Development and Environment in the Government of Hamburg, told EURACTIV.de in an interview.