Ukraine’s potential to supply the EU with hydrogen 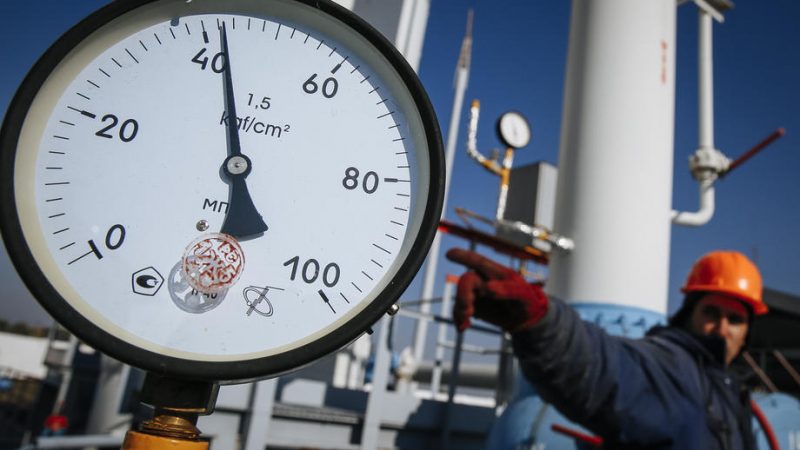 File photo. A gas pressure-gauge of the gas-compressor station in Mryn village, about 130 km of Kiev, Ukraine, 15 October 2015. In case of Russian incursion in Ukraine major gas disruptions are expected in the EU. [EPA-EFE/ROMAN PILIPEY]

Recent developments point at the important role Ukraine can play in the long term: that of a major supplier for the EU of environmentally friendly energy – particularly hydrogen, writes Dr Frank Umbach.

The decision by the US government this summer to greenlight the Nord Stream 2 pipeline caused predictable furore across international media.  But recent developments could be a blessing in disguise for the energy security of Ukraine and Europe.

Together with the US, Germany committed to a Green Fund for Ukraine, with the objective of attracting at least $1 billion in investments into the Ukrainian energy sector. This does little to compensate for its lost annual revenues of $2bn from being a transit country for Russian gas. But it points to a more important role that Ukraine can play in the long term: that of a major supplier of environmentally friendly energy – particularly hydrogen.

Both blue hydrogen and green hydrogen are a key part of Europe’s future energy mix. Hydrogen is the only realistic technological option for hard-to-abate sectors of energy-intensive industries – though green hydrogen demands renewable energy capacities that do not yet exist.

Meanwhile, blue hydrogen, which uses natural gas and can reduce emissions by up to 85% compared to normal, natural gas consumption, is well-placed as a bridge to cover European energy needs over the next decades.

The German government projects a hydrogen requirement of 90-110 terawatt-hours (TWh) by 2030 and as much as 1,800-2,500 TWh annually by 2050. By comparison, the entire electricity production in Germany in 2019 was 511 TWh, of which less than half was provided by renewables.

It will be impossible to meet short to medium-term energy needs without imports from other countries. Even more cautious estimates have concluded an annual German hydrogen import demand of 340 TWh.

It is not surprising that German stakeholders have recognised Ukraine’s potential, not just in compensation for the Nord Stream-2 deal. Ukraine was the only European country that was mentioned in Germany’s hydrogen strategy of January 2020 and plays a major role in Germany’s H2 Global government initiative.

Ukraine’s appeal lies in both its existing and potential gas infrastructure. It has the greatest growth opportunities in natural gas production in Europe, providing the necessary natural gas reserves and an expandable pipeline network with a capacity of at least 90 billion cubic metres. It holds the second-largest storage capacity in Europe and Eurasia behind Russia, with a capacity of 31 bcm, which could be partially converted for CCS at relatively moderate costs.

Despite Ukraine’s efforts to expand its gas production, it has stagnated at 20 bcm per year during the last 25 years. This could soon change with Naftogaz recently acquiring 30-year exclusive rights to a 30,000 square kilometre gas reserve in the northern Black Sea.

Ukraine’s offshore wind potential is also one of the highest in the Black Sea region – representing one-fifth of Europe’s offshore capacity but also provides potential solar and biomass capacities. Its solar and wind power capacities grew to 7,311 MW and 1,402 MW respectively last year. As a result, it has been involved in talks not only to produce blue but also green hydrogen.

As a member of the Energy Community (EC), through which Ukraine commits to introduce the EU’s entire acquis, Naftogaz has been unbundled following the implementation of the EU’s Third Energy Package. In 2020, it was the EC member country with the second-highest ranking of achievements.

This year, Kyiv has also stepped up efforts of its “de-oligarchisation”, rooting out corruption and improving the business climate in the gas sector. Another pre-condition for joint hydrogen projects and other green energy production will be realised in 2023 when Ukraine’s electricity grid network will be coupled and integrated with the EU’s.

With Russia’s circumventing pipelines of Nord Stream 1-2 and TurkStream, Gazprom’s mid-term planning only foresees Ukraine’s gas transmission system (GTS) being needed for reserve capacity such as repairing and gas seasonal supply fluctuations of not more than 10-20 bcm annually, making its maintenance unprofitable.

Hydrogen exports to Europe, based on renewables, offer Ukraine the perspective of using its GTS and gas storage sites to enhance both its own and Europe’s energy security, as well as greening its energy mix. They will provide Kyiv with a continued source of revenue through transit, production, and storage fees.

Hydrogen Europe has envisaged the creation of hydrogen electrolyse capacity in Ukraine of at least 9.8 GW in the short term. In July this year, the European Bank for Reconstruction and Development (EBRD) and the Gas Transmission System Operator of Ukraine (GTSOU) formalised their cooperation on low-carbon hydrogen and to develop hydrogen supply chains.

Last month, German energy giant RWE announced a memorandum of understanding with Naftogaz for the production and storage of hydrogen and its export to Germany alongside the full value chain of green hydrogen and derivates like ammonia.

Ukraine also plays a key role in the European “H2EU-Store” partnership, which the Slovak TSO EUSTREAM has joined this month. It envisages the production of green hydrogen in Ukraine and transport it via EUSTREAM pipeline network to Austria and Germany.

The latest investment agreements by European governments and businesses suggest that rather than collapsing in the face of NS2 and TurkStream, the Ukrainian gas industry may yet grow to become an essential pillar of increasingly green energy policies.

Following the EU’s Green Deal of December 2019, Ukraine published its own Green Deal in January 2020 and drafted a national hydrogen strategy last February. But to be an effective producer of blue and green hydrogen for the European market, Ukraine’s existing infrastructure will require further investments, effective regulations, and it will need to improve further the FDI conditions for private and public investors.