‘Volunteers in Ukraine are so many they are told to wait’ 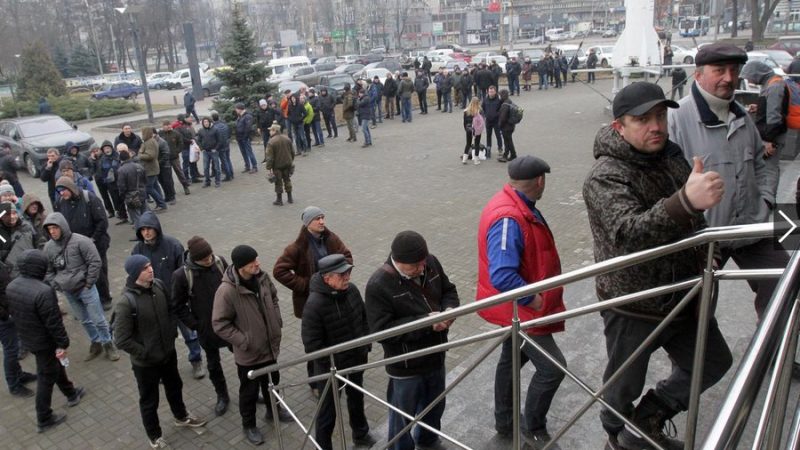 Ukraine civilians waiting in line to volunteer in the army. [@p_ferragu Twitter]

The number of volunteers in Kyiv and other cities for territorial defence is so significant that people are asked to wait as there are not enough weapons and structures to integrate them, writes Roman Rukomeda.

Roman Rukomeda is a Ukrainian political analyst. This is his third account of Russia’s invasion into Ukraine, which he succeeded to send to EURACTIV despite limited internet access.

The fourth day of Ukraine’s fight against the Russian aggression told Ukrainians a lot about themselves. It is not just about being able to successfully stand against the second-largest army in the world, furiously destroying Russian soldiers and tanks all over Ukrainian land, sometimes with just several Molotov cocktails. It is also about the spirit and willingness to help that Ukrainians found again in themselves after the Revolution of dignity in 2014.

Attacks by Russian rockets and ballistic missiles were witnessed throughout Kyiv both night and day on Sunday, part of which was launched from the territory of Belarus.

People of Kyiv, primarily women and children, have got used to spending their nights in the subway stations that shelter them from air attacks and assaults of subversive Russian groups that are still present in the capital. However, the numbers of these forces have decreased after being severely depleted and caught by territorial defence, police, and other units that are guarding the peace and order in the city.

Unfortunately, Russian terrorists inside Kyiv have started to use the tactics of maximum intimidation of the civilian population, killing peaceful citizens. Parents and one child, a small girl, were shot and two younger kids severely wounded by such people over the weekend.

Russia’s and Belorussia’s intimidation tactics use Iskander ballistic missiles, launching them on peaceful cities asides from Kyiv. One of these missiles destroyed the cinema building in the centre of Chernigiv. Two others landed on the houses of Zhitomyr and its civilian airport.

Besides, the morning for the town of Vasylkiv near Kyiv began with the airstrike on the oil refinery and storage base, causing a devastating fire through the burning of gasoline and diesel. Possibly one of the Russian tactics elements is to exhaust any fuel reserves of Ukraine, making civilian population hostages of the areas where the battle is going on.

This kind of war and attack breeds in Ukrainians’ the feeling of pure anger and fury with the firm will and desire to stand till the end of this war. According to the last sociological polls (about 70%), the majority of Ukrainians said that they are sure of the victory of Ukraine in this terrible aggression.

The number of volunteers in Kyiv and other cities for territorial defence is so significant that people are asked to wait as there are not enough weapons and structures to integrate and task them to protect the capital and other cities.

Ukrainian leadership show many signs of high morale and confidence in future success. For example, today, President Zelenskiy created legal grounds for creating an international legion for all the volunteers from abroad who are ready to fight together with Ukrainians.

Russians did not reach any significant objectives from the military side, slowly moving in southern, northern, and eastern directions. The biggest cities of resistance – Kyiv and Kharkiv did not surrender are not circled and blocked. However, during the first four days of the war, Ukrainian forces managed to make such losses to Russians as during the whole first war in Chechnya.

Understanding this challenging situation, Russian President Putin has started threatening Ukraine and Europe with nuclear weapons. But Ukrainian leadership and nation do not have fear anymore. This fear disappeared after the first three days of war and the failed siege of Kyiv.

During Sunday, the most painful act of Russian aggression was the attack and further destruction of the world’s biggest plane, Ukrainian An-225 Mriya (Dream in Ukrainian), burned at Antonov’s airport near Kyiv.

Russia wants to destroy the Ukrainian dream, but they have already lost the primary battle – for hearts and minds of Ukrainian nation that will never refuse from its freedom.”