What can Lithuania and Poland do to protect Belarusian political refugees? 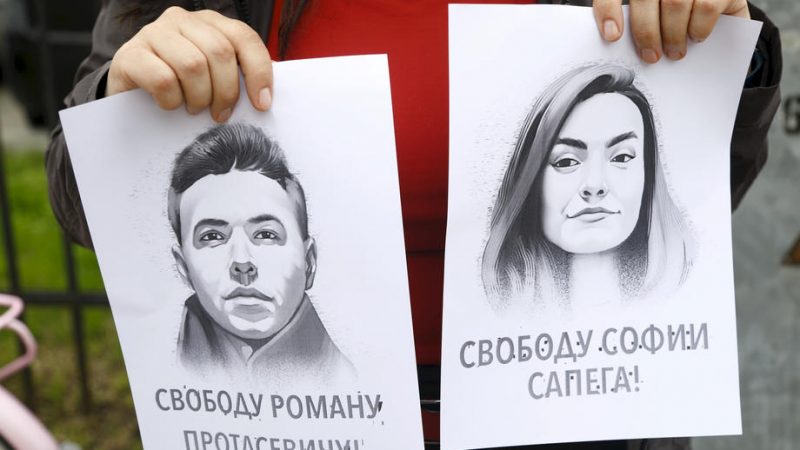 As many Belarusians flee their country and seek refuge in neighbouring countries, what can Lithuania and Poland do to protect Belarusians, write Monika Bičkauskaitė and Veranika Laputska. EPA-EFE/TOMS KALNINS

As many Belarusians flee their country and seek refuge in neighbouring countries, what can Lithuania and Poland do to protect Belarusians, write Monika Bičkauskaitė and Veranika Laputska.

Veranika Laputska is a Rethink CEE fellow at the German Marshall Fund and Monika Bičkauskaitė a program assistant at GMF’s Warsaw office.

On 23 May, an emboldened Belarusian leader Alexander Lukashenko hijacked a European plane flying from Athens to Vilnius. While the civil passenger flight was forced to land in Minsk under the pretext of an alleged security threat, the real reason for this stunt was to detain a former editor of the prominent resistance channel NEXTA, Raman Pratasevich, and his partner Sofia Sapega.

Yet, the target of this terrifying arrest was not only Raman, but the Belarusian opposition as a whole, as well as its diaspora residing in neighbouring countries abroad which is fighting for freedom in their country. Lukashenka was trying to show that no one can hide from the regime, no matter where they are.

In fact, as furthered by the head advisor to the President of Lithuania Darius Kuliešius, any member of the opposition could have been the target, including Sviatlana Tsikhanouskaya, who was taking the same air route the previous week.

The desired outcome of this intelligence operation was not only to scare the opposition but to also end the national resistance that has been going on for almost a year, as well as to showcase Lukashenko’s personal confidence, sparked by the lack of severe consequences he has faced previously from the EU.

And yet, the opposite occurred. While the international spotlight from the Belarusian cause was evaporating, the recent events put the Belarusian quest for freedom across front pages in Europe. As for the Belarusian dictator, his actions were perceived as a weakness, rather than strength by the international community. Lukashenko showed his desperation to cross any line in order to continue the repressive measures against his political enemies, even if this means threatening foreign citizens.

The international community, including the US, the UK and the EU were quick to react to these unprecedented events and to express their full support for Raman and the Belarusian opposition. The transatlantic community condemned Minsk’s actions and is planning to elaborate on further sanctions against the regime which threatened the international airspace.

All major European airlines already stopped their flights to, and over Belarus, with Japanese and Singapore Airlines following the queue. Furthermore, Belarusian national airline Belavia had to suspend flights to Paris, London and Vilnius, initially for several months, leading to a 50% reduction of their staff to cut their losses.

How to protect Belarusian Democrats Abroad?

In addition to exerting economic pressure, the neighbouring countries are asking themselves how to best protect the political émigrés in Lithuania, Poland and other countries where they found refuge.

These countries must take additional measures to ensure their security. Lithuania, Poland, and other countries should first increase the physical security of the political refugees by offering personal protection, provided by police staff or secret services/intelligence officers wherever possible.

As agreed by the Deputy Minister of Foreign Affairs of Lithuania, Arnoldas Pranckevičius, Lithuania needs to extend the protection of freedom fighters under refuge in their country, and such protection should go beyond the president-elect Tsikhanouskaya.

Moreover, the Belarusian regime is not only threatening the members of the opposition but is also targeting the relatives of those who have left the country. Primarily, Minsk is using intimidation by threatening to jail their family members. Such is the case of Belsat journalist Aryna Malinouskaya, whose grandparents and her sister’s husband are detained.

Hence, as proposed by Polish Senator Bodgan Klich, it is critical that the EU extends legal, financial and material assistance. Not only to the political prisoners in Belarus and the political émigrés, but also to their families back home.

Additionally, the countries harbouring political refugees should provide them with information packages and training, outlining possible threats and educating them on how they can protect themselves. Furthermore, it is important that the countries provide the asylum seekers with a status of political refugees which offers them protection under international law. Finally, the EU countries need to increase their counter-intelligence efforts and coordination to make sure such attacks do not repeat in the future.

Going beyond that, Tikhanouskaya has recently launched an initiative “Support has no boundaries,” asking people from all over the world to write letters to political prisoners in Belarus to express their political and emotional support as international attention is their key lifeline.

This is why the international community should continue their efforts and take concrete actions in order to guarantee the release of Raman and of all political prisoners jailed in Belarus – whose number, alarmingly, keeps growing every day.