Why Germany should refuse the Russian gas purchase right now 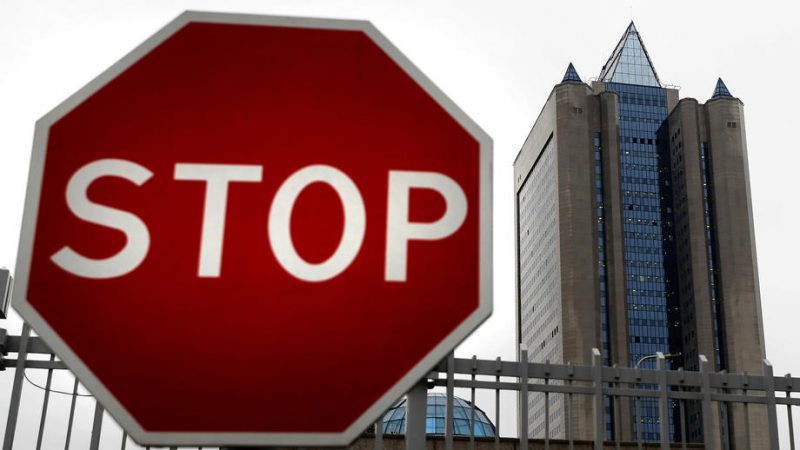 A stop sign is pictured next to the Russian Gazprom company's headquarters in Moscow, Russia, 21 January 2020. [EPA-EFE/MAXIM SHIPENKOV]

A full embargo on imports of Russian energy would be the EU’s most significant step towards halting Russian aggression to date, write Dmytro Kryvosheiev and Margaryta Khvostova.

The Weaponisation of energy supply to Europe by Russia has been foreseen for many years but resulted in a very confined response from the European leaders if any. Germany increased its dependency on Russian gas after the Kremlin’s aggression against Ukraine: from 2018, Germany intensified Russian gas purchasing by almost 30%.

The launch of the Nord Stream 2 natural gas pipeline, the construction of which was subject to severe criticism by security and environmental experts, would have increased that dependence even further.

Investigation and accountability for such political decisions should be evaluated in due time; however, the error of addressing energy and security issues separately should be urgently corrected.

Energy and security issues are interdependent and cannot be approached separately. Making the German energy sector reliant and dependable on cheap Russian oil and gas, while being an economic victory, is also a huge security threat to the country.

Approaching this issue only from an economic standpoint creates a very dangerous blind spot for German security since its industries are tempted by the cheap energy sources and oppose any political decision to bring the usage of the Russian gas to a halt and look for alternatives and diversification of energy sources.

While postponing that decision, Germany continues to fuel the Russian economy, which directs the gas payments to the production of weapons used in the offensive war against Ukraine and the killings of tens of thousands of civilians and children.

Germany is highly dependent on Russia for its energy needs: up to 55% of gas and 34% of oil supplies, according to the Agora Energiewende think tank in Germany.

Since the war in Ukraine began on 24 February, the European Union has paid out €21 billion ($23.3 billion) for fossil fuel imports from Russia in just the first month of the invasion, according to the Helsinki-based Center for Research on Energy and Clean Air (CREA).

Russian energy import to the EU is one of the most important financial sources of the Russian budget. The EU spends around €1 billion a day on Russian energy. At the same time, Russia spends almost €860m daily on the war against Ukraine.

What has Germany done so far?

Germany has been trying to manoeuvre between its business demands and sanctions. Despite intense debates over the possibility of paying for the Russian gas in rubles to bypass sanctions, Germany has recently agreed to suffice the Kremlin’s request.

Unfortunately, vague guidance of the European Commission on that matter has allowed for such an opportunistic decision. At the same time, Germany seems determined to impose a complete embargo on Russian oil and even urges other member states to do the same.

Even though, since the beginning of the war, Germany has proclaimed its dedication to decreasing its reliance on Russian gas, so far, it constitutes only a 20% reduction (from 55% to 35%). While following the same pace, Germany will be able to become independent from Russian gas only by mid-2024 – two years from now. Germany might have this time, but Ukraine and Central-Eastern Europe do not.

Therefore, accelerating the cutting of Russian gas is crucial to ensure the security of the European borders. The strategic gravity of making this step at such a slow pace will undoubtedly have a disastrous effect, but not for the German economy – instead, it will undermine the Russian plans to destroy the balance and security in the whole of Europe.

What can Germany do to cut its energy dependence on Russia?

Studies show that even a short-term suspension of the Russian gas supply would be manageable for the German economy. The data predicts that though the GDP decline is inevitable in case Germany will be cut off from Russian energy, the slump will not exceed the one caused by the COVID-19 pandemic (0.5-3% (or even 0.2-0.3%) against 4.5% in 2020).

Such a decline equates to less than 1% of German GDP or around 100 Euros per citizen per year, or 2.5% GDP and 1000 Euros over a year in a pessimistic scenario.

This is the price that many German citizens are likely to agree to pay to stop financing the mass killings and ensure that the war will not spread to their homeland. Moreover, considering the price Germany has and will have to pay to accommodate the Ukrainian refugees (so far, €2 billion), finding alternatives to the Russian gas might be a more rational choice.

Two-thirds of the German population would be willing to pay higher prices for gas and heating if this were to increase pressure on the Russian government. Four out of five Germans would lower their room temperature to save energy. And more than half of higher-income households would be willing to spend some of their income to help poorer families cope with higher energy prices. Moreover, according to the recent statistics, 50% of the German population supports the embargo, while scholars, politicians, business society representatives, and celebrities sign petitions supporting the complete ban.

Most importantly, should the German government have a political will to impose the embargo, it should do it as soon as possible, considering that the pressure to adjust the energy consumption will be more manageable during the summer season. During that period, alternative suppliers, such as Norway, can fuel the industries. And from 2024, Germany can obtain liquefied natural gas (LNG) from Qatar.

At the same time, the government should create adjustment incentives both for households and industries. To do that, the decision-makers should act decisively and send a clear message about the necessity of this step to bring the war to an end.

Therefore, a full embargo on imports of Russian energy would be the EU’s most significant step toward halting Russian aggression to date. If Germany, as one of the EU leaders, refuses to purchase Russian gas, it will significantly decrease Russia’s economic capabilities to wage war against Ukraine.