The 2015 UK election poster of the Democratic Unionist Party of Northern Ireland has been overtaken by events. [Twitter]

The DUP – with 10 seats in Belfast and one MEP, Diane Dodds – emerged as the unlikely kingmakers after Thursday’s election produced a political earthquake, with the Conservatives losing their majority for a hung parliament.

The DUP was founded by the Reverend Ian Paisley, who once denounced the Pope as “the Antichrist” in the European Parliament.

The informal ‘confidence and supply’ deal outlined between London and Belfast has already caused unquiet in Brussels.

Asked by EURACTIV.com on Monday (12 June) if there were concerns about the British government being propped up by the hardline Protestant group, given that the EU was making Northern Irish peace and the border a priority, EU Enlargement Commissioner Johannes Hahn would only repeat that the Commission was “ready and prepared.”

Privately, a senior EU official agreed that the result of the UK election – called by May to boost her majority – had been “a shitshow.”

The difficulties faced by May in London on Monday already forced the planned Queen’s Speech – the first bill of a new government to outline its priorities – to be postponed.

Meanwhile, significant numbers of Conservatives lined up over the weekend to warn against any dilution of the LGBT agenda at the behest of the DUP.

Most senior was Scottish Conservative Leader Ruth Davidson, herself a lesbian poised to marry her partner, who took the Conservatives from one seat to 13 in Scotland, largely on the back of her own personal popularity.

Quizzed on Sunday about the prospects of a tie-up with the DUP, Davidson said “As the Conservative party, we are the party of equal marriage, we introduced it to the House of Commons and also we would use our influence to try and advance LGBTI rights in Northern Ireland” before cutting short the interview.

Any attempt to roll back the UK abortion time limits – currently 24 weeks – would almost certainly unite opposition parties in parliament. Although the issue is traditionally a free vote of conscience, it was mooted over the weekend as a possible DUP demand.

Abortion is illegal in Northern Ireland and women who seek online abortion medication have been arrested by police.

A Conservative former Northern Ireland secretary has already raised the possibility. Owen Paterson told the BBC: “I don’t see many major social issues coming up in the next Parliament.”

“You might get a debate, I suppose, on further reduction of abortion times as medical science advances.”

On top of the party’s militant stance on Protestant rights, DUP MP Sammy Wilson does not believe in climate change and has called public breastfeeding “voyeuristic.”

The DUP leader in the Belfast Assembly, Arlene Foster, saw the Northern Ireland Assembly collapse while she was first minister over a dubious “cash-for-ash” recycling scheme.

The party is also facing questions over an enormous mystery loan during the 2016 EU referendum.

Foster is, however, keen to avoid a hard border with Ireland and has spoken against a “hard Brexit.”

She has said: “No-one wants to see a ‘hard’ Brexit, what we want to see is a workable plan to leave the European Union, and that’s what the national vote was about – therefore we need to get on with that.

“However, we need to do it in a way that respects the specific circumstances of Northern Ireland and, of course, our shared history and geography with the Republic of Ireland.”

But the biggest worry in Brussels will be the Northern Irish border. The Commission has stated repeatedly that – along with EU citizens’ rights in the UK – its main priority was the Good Friday Agreement, which brought an end to violence and terrorism in Northern Ireland in the late 1990s.

Part of that agreement was that governments in London and Dublin should be independent and neutral in their dealings over the devolved province.

For example, Sinn Fein refuse to take the Northern Irish seats they win in the UK parliament.

For a London government to go into alliance with a far-right party like DUP – even an informal one – would seem to put that independence at risk, undermining the confidence of Northern Ireland’s Catholics in the process.

The result is especially ironic for May, who ran on a campaign that highlighted Labour leader Jeremy Corbyn’s contacts in the 1980s with the Catholic nationalist Sinn Fein, who were the political wing of the Irish Republican Party terrorist organisation. 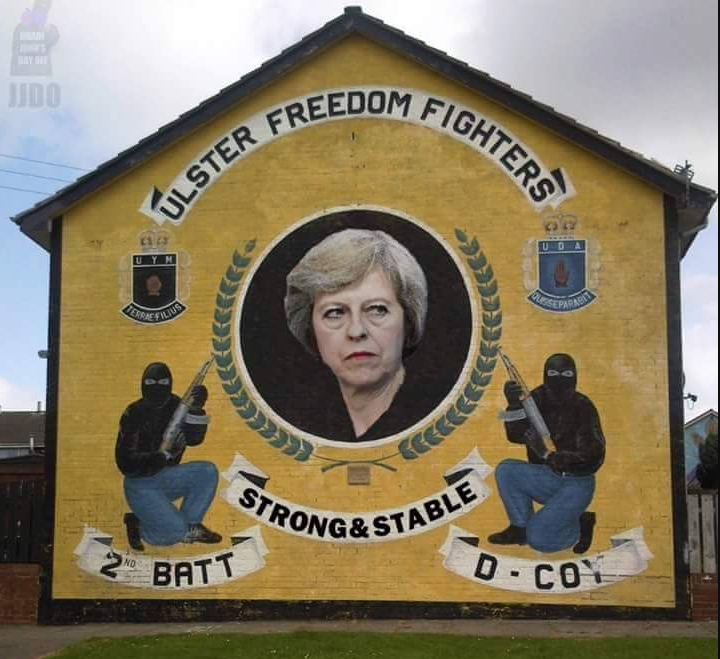 A photoshopped image of an Ulster Freedom Fighters mural in Belfast, illustrating the nature of some of the DUP’s support. [@agellis23/Twitter]

The DUP have their own close links with the loyalist Protestant paramilitary UDA (Ulster Defence Association).

Foster, according to the Guardian, met with a senior UDA leader just days after a political killing last month.