EU Digital Commissioner Mariya Gabriel said the bloc needs to be "vaccinated" against so-called fake news, which she compared to a disease. [Commission]

The European Commission remained silent on Tuesday (26 September) when confronted with the news that Spanish authorities had shut down websites that provide information about this weekend’s Catalan independence referendum. A vote that Spain still maintains is illegal.

With four days to go until the October 1 vote, the clash between Catalonia’s pro-separatist government and Madrid is increasingly being played out in the arena of logistics and international opinion.

Police have seized nearly 10 million ballots for the vote and have closed down 59 websites that provide information about the referendum. Another 85 sites are in the process of being closed, judicial sources said.

Faced with these actions, the separatist leaders of the wealthy northeastern Spanish region, home to around 7.5 million people, have accused Madrid of “repression”.

The central government argues that it is simply applying the constitution, which does not allow this type of referendum, as is the case in neighbouring France and Italy.

The European Commission said it does not have the competence to react.

Asked to comment, Mariya Gabriel, European Commissioner for digital economy and society, who is also responsible for media oversight, said it was not the Commission’s business to interfere in internal matters of a member state.

The issue quickly became the highlight of the Commission’s midday briefing.

“We don’t have anything to say, other than reiterate our respect for the legal order and the constitutional order within which all these measures have been taken,” Commission chief spokesperson Margaritis Schinas said insisted, replying to an initial question.

After that, Schinas came under fire from the press pool for not reacting to the crackdown on freedom of expression in a member country.

He was reminded that the EU was very vocal in similar cases with other countries, such as Turkey, Russia andCambodia. “Thank you for your positions. We cannot improvise competences we don’t have,” he answered.

Amadeu Altafaj, former Commission spokesperson, now representing the government of Catalonia in the EU, tweeted that there was a “serious risk of reputation damage” for the EU executive.

This isn't only about Catalonia. There is a serious risk of reputational damage for the @EU_Commission as guardian of the Treaties. https://t.co/GaWEBCxbAY

The chief prosecutor in Catalonia ordered police to seal off buildings that will house polling stations before the day of the referendum and deploy officers on the day of the vote to prevent ballots from being cast.

#UPDATE Spain’s prosecutor the Catalan police that a diameter of 100m from big polling stations must be sealed off https://t.co/pZBoZl1tHW

The move comes a day after he ordered regional police to identify those in charge of polling stations on Sunday, when the referendum is to be held.

“The order has been conveyed and it will be executed will all normality,” a spokesman for Catalonia’s regional police force, the Mossos d’Esquadra, told AFP.

To ensure they will cooperate, Spain’s interior ministry this weekend put Catalonia’s regional police force under its supervision.

By focusing on polling stations, prosecutors appear to have put in place a plan that targets all the logistics needed to stage the referendum, which has been deemed illegal by Madrid.

Prosecutors have also threatened Catalan mayors who provide locations for the vote with criminal charges, as well as directors of schools and universities.

The election commission set up by Catalan separatists to oversee the vote has resigned after Spain’s Constitutional Court threatened to impose daily fines of €12,000.

Spain’s democratic constitution of 1978, which was approved by more than 90% of Catalan voters, gave wide autonomy to the regions but affirmed “the indissoluble unity of the Spanish nation”.

Rajoy has pulled out of an informal summit of European Union leaders in Estonia on Friday so as to be able to attend the last meeting of his cabinet before the referendum. 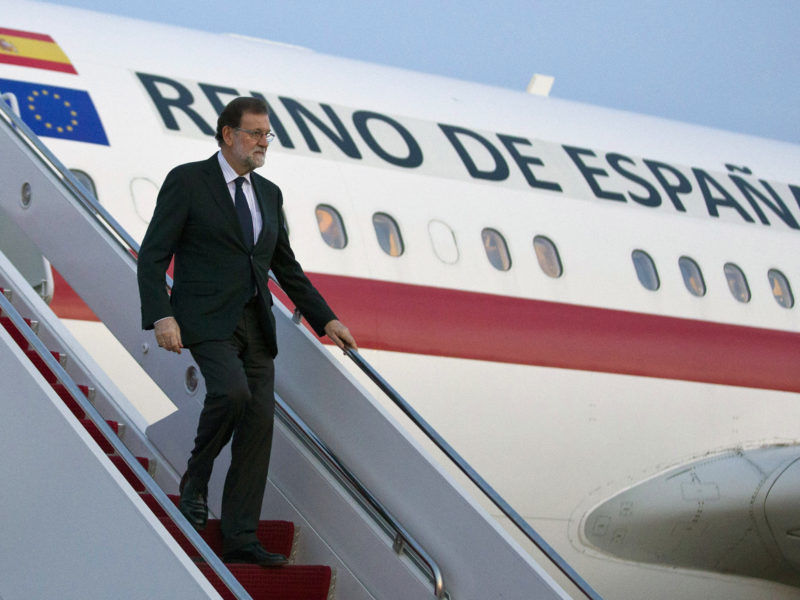 He also announced that the crisis would delay the national budget but ruled out fresh elections.

“I’m not thinking about calling early elections as a result of what we were seeing,” he said in Washington.

During a joint news conference with Spanish Prime Minister Mariano Rajoy in Washington, Trump said it would be “foolish” for Catalonia not to stay in Spain.

“You’re talking about staying with a truly great, beautiful and very historic country,” he added as Rajoy stood at his side.

Rajoy urged Catalan officials to return to “common sense” even as Madrid stepped up its effort to stop the vote from going ahead.

In Huelva, southwestern Spain, Guardia Civil officers dispatched to Catalonia for the referendum were cheered on by hundreds of locals with cries of “Go for them!” and draped them with Spanish flags.

In Barcelona, residents have been giving out red carnations to regional police.

Spain has deployed two-thirds of its riot police to Catalonia, some 2,000 officers, for the referendum, according to daily newspaper El Pais.

“People will go out and vote en masse, peacefully on Sunday,” he said. “I don’t have any doubt.”