The fragile status of the EU’s special envoy on religious freedom is an unlikely topic of conjecture in the months leading up to next May’s European elections.

Jan Figel, a former EU education and culture commissioner, was appointed in May 2016 when the post was created by European Commission President Jean-Claude Juncker, and his mandate has since been extended twice for an additional year. Critics say that a one year term is too short to pursue any strategic plan.

In their report, MEPs said that Figel had “developed effective working networks” within the EU institutions and praised him for “continuous engagement and co-operation and complementarity of actions with the EU Special Representative for Human Rights.”

But they added that the Special Envoy’s role needed to be substantially beefed up. The new remit should include extending the Special Envoy’s term to match that of the Commission’s five-year term, and “consolidated with sufficient human and financial resources”. 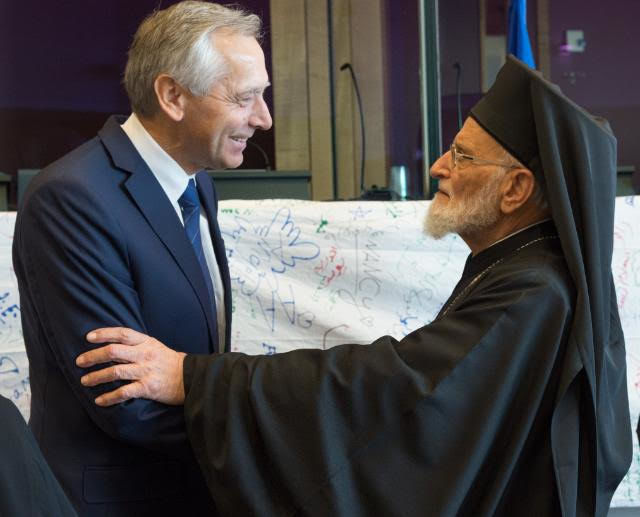 The setting up of a “regular advisory working group of member states’ FoRB institutions and European Parliament representatives together with experts, scholars, and representatives of civil society, including churches and other faith-based organisations”.

Nor does Figel have a budget and formal status in the EU institutions beyond serving as a special advisor to the EU’s development commissioner Neven Mimica. His staffing budget covers one assistant, which is less than the recently created German Government Commissioner for Global Freedom of Religion.

Campaigners argue that freedom of religion or belief is not given the importance it deserves in the EU institutions.

ADF’s Adina Portaru has argued that the role of the special envoy and the EU’s Guidelines on Freedom of Religion or Belief, drafted in 2013, “need to be developed further if the EU wants to become a leader in protecting the human right of religious freedom”.

At an event in the European Parliament hosted by ADF International on 28 November to mark the 70th anniversary of the Universal Declaration of Human Rights, Pasquale Annicchino, Senior Research Associate at the Cambridge Institute on Religion, spoke about the need to strengthen Figel’s mandate.

He complained that Federica Mogherini, the EU’s High Representative on Foreign Affairs, had been silent in the case of Asia Bibi, the Pakistani Christian woman who was freed in November after eight years on death row for having allegedly committed blasphemy. That was despite the fact that European Parliament President Antonio Tajani had been publicly supportive of Bibi, and her plans to seek asylum in Europe.

But it is not just at EU level that demands for greater advocacy on religious freedom and belief are gaining traction. Germany, the UK and Denmark have all appointed their own Special Envoys or Commissioners on Freedom of Religion or Belief this year.

On Thursday (13 December), the Faith and Freedom Summit, a coalition of faith-based and non-faith-based NGOs, launched a call to all MEPs and Spitzenkandidats to sign a pledge to “uphold and defend the freedom of conscience and religion of all individuals by rejecting and speaking out against bigotry, discrimination, harassment and violence; and so build a more equitable society for all.”