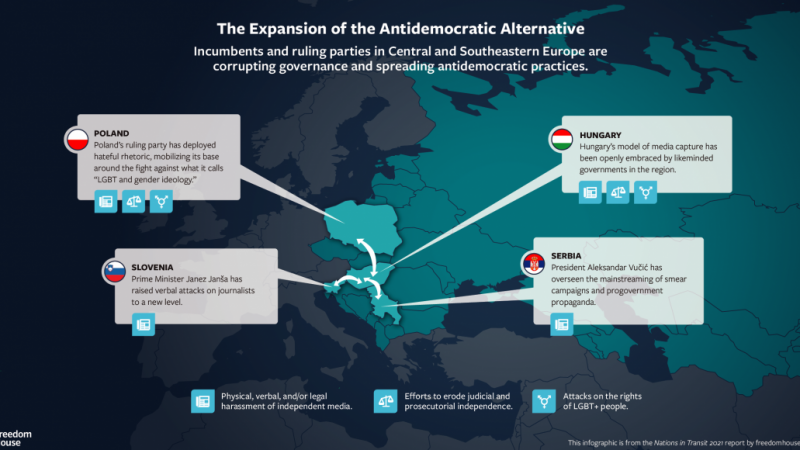 In its latest report published on Wednesday (28 April) the NGO Freedom House warns of an “antidemocratic turn” throughout Europe, “fuelling a deterioration in human freedom with global implications”.

In its annual report the US government-funded NGO, which specialises in research and advocacy on democracy, political freedom, and human rights points out that “incumbent leaders are spreading antidemocratic practices across Europe” and in many countries, ruling parties are undermining democratic principles to stay in power.

This year’s report marks the 17th consecutive year of overall decline, leaving the countries designated as democracies at its “lowest point in the history of the report”.

The Washington-based group warns that many of the evaluated countries “are currently worse off than they were four years ago”, as measured by the net change in their Democracy Scores.

Overall, countries are “turning away from democracy and find themselves trapped in a cycle of setbacks and partial recoveries”.

The democratic decline is particularly obvious in Central and Southeast Europe where countries are seeing drops in respect for human rights, as well as media and election freedoms.

According to the report, Hungary and Poland both stand out for their “unparalleled democratic deterioration over the past decade” having experienced the biggest declines measured in the history of the report.

‘Nations in Transit’ says that “Hungary has undergone the biggest decline, plummeting through two categorical boundaries to become a Transitional or Hybrid Regime last year.”

Meanwhile, “Poland is still categorized as a Semiconsolidated Democracy, but its decline over the past five years has been steeper than that of Hungary.”, it added.

The ruling parties in the two capitals “have long been emulating each other in cracking down on judicial autonomy, independent media, the civic sector, and vulnerable minority populations”, the report highlighted.

According to the US-based NGO, “a success story is especially needed in the Balkans, where democratic gains have been rolled back in most countries”.

In Serbia, “President Aleksandar Vučić and his Serbian Progressive Party (SNS) have overseen the mainstreaming of smear campaigns and progovernment propaganda, which contributed to the SNS’s sweeping election victory and the formation of a nonrepresentative parliament in 2020”, the report states.

Additionally, it mentions that Serbia has only recently been reclassified as a “hybrid regime, and still more is hurtling toward reclassification.”

In a separate, dedicated report, Bulgaria’s Democracy score declined from 4.50 to 4.25 due to concerns in relation to the “politicization of the prosecutor general’s office, the lack of accountability for police and prosecutorial misconduct, and the discriminatory treatment of Romany citizens during the COVID-19 pandemic”.

The report also stated that in 2020, “a slight deterioration of the work environment for journalists” and “cases of police using force against media workers during the year’s demonstrations” were observed. Moreover, “some journalists were verbally or physically assaulted in other contexts”.

According to Freedom House, independent and critical outlets faced increasing pressure from the media-capture model pioneered in Hungary – and to a lesser extent, Serbia – in 2020. Under this model, “legal and economic tools are used to squelch critical outlets and bolster friendly reporting”.

The report points out that the antidemocratic norm-setting in Poland, Hungary, and Serbia has influenced neighbouring countries, such as Slovenia.

“This antidemocratic learning process is most visible in Poland, where last year the government used a state-owned energy giant to acquire four-fifths of the country’s regional media outlets and announced plans to impose an advertising tax, which would strip an already ailing private media sector of vital resources”, stated the report.

Furthermore, “the Polish government has used state-owned companies to take control of regional outlets while harassing critical media through administrative and legal measures. In 2020, Gazeta Wyborcza, the country’s second largest daily newspaper, was fighting over 50 lawsuits, many of them filed by the ruling Law and Justice party and its allies”.