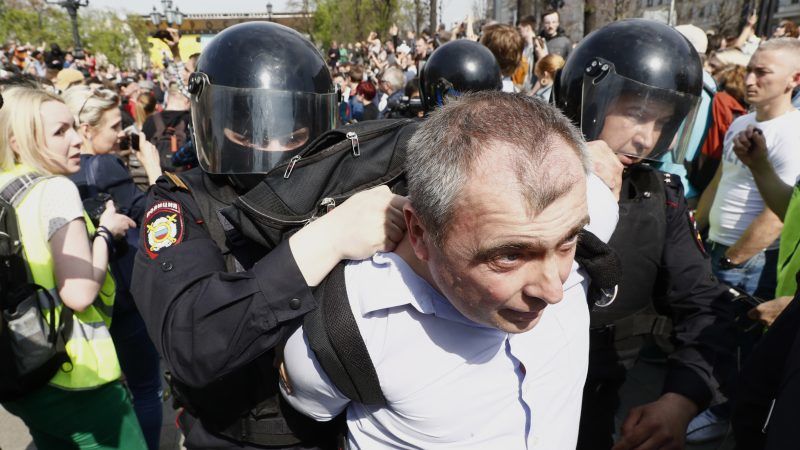 Russian riot police arrest participants of an unauthorized liberal opposition rally, called by their leader Alexei Navalny, prior to the official inauguration of president Putin, in Moscow, 5 May 2018. [Sergey Inlitsky/EPA/EFE]

Foreign governments and rights activists on Sunday (6 May) expressed outrage over mass arrests in Russia and the brutality with which protests were broken up on the eve of Vladimir Putin’s inauguration.

The European Union slammed “police brutality and mass arrests” after nearly 1,600 protesters including opposition leader Alexei Navalny were on Saturday detained in 27 Russian cities during nationwide rallies ahead of Putin’s swearing-in ceremony for a fourth Kremlin term on Monday.

#Russia Detention of over a thousand demonstrators and violence used against them by the Russian authorities across the country today threaten the fundamental freedoms of expression, association and assembly https://t.co/nbOKzOModr

Thousands had taken to the streets heeding a call from Navalny, a charismatic 41-year-old opposition politician, who was barred from challenging Putin in March’s presidential election and called on Russians to stage rallies under the catchy slogan “Not our Tsar”.

In Moscow, Saint Petersburg and a number of Russian cities the rallies were not authorised and police used force to break up the protests, beating demonstrators with truncheons and dragging them along the ground.

In a new development that shocked many, police in Moscow were helped by pro-Putin activists dressed as Cossacks, a paramilitary class who served as tsarist cavalrymen in imperial Russia.

Amnesty International said its representatives saw the “Cossacks” pummel protesters with whips and fists as police looked on.

Pavel Chikov, head of the Agora rights association, told AFP that several dozen people received injuries, mostly haematomas, and several of them turned to his group for help.

The youngest protester who turned to Agora, was 13 years old, he said.

In Moscow alone some 700 people — including journalists and minors — were detained and more than 200 people were held in Russia’s second city Saint Petersburg, said OVD-Info, an independent monitor that tracks arrests.

The European Union expressed its dismay over the violence, saying it threatened the fundamental freedoms of expression and media.

“Even if some of the demonstrations were not authorised in the location where they took place, this cannot justify police brutality and mass arrests,” said EU spokeswoman Maja Kocijancic on Saturday.

In Ukraine — where a popular uprising ousted a Kremlin-backed regime in 2012 — the foreign ministry said on Sunday it was “especially outraged” by the illegal detention of young people and minors in Russia.

Pictures of riot police detaining minors — some apparently in their early teens — went viral on the Russian internet.

Maxim Shevchenko, a member of the Kremlin’s rights council, said those who pitted the paramilitary activists against the protesters should be held responsible.

“It is an emergency event,” he told Echo of Moscow radio station.

“Let those officials who decided to use them say their names and answer to Muscovites for what essentially is bringing paramilitary armed units into the city.”

Political observer and writer Viktor Shenderovich said that by using paramilitary groups to break up the Moscow rally the Russian authorities were testing a new tool — violence by proxy.

“Pitting one part of society against another one means that the authorities are looking at — and are already testing — civil war as an instrument of political manipulation,” he wrote. “This is very, very serious.”

Navalny, who was grabbed by police and carried away by his arms and legs shortly after he appeared in Moscow’s packed Pushkin Square, was released shortly after midnight and now faces up to 30 days in prison, his lawyer said.

“It appears they received an order ‘do not put him behind bars before the inauguration’,” Navalny said on Twitter, referring to the Moscow authorities.

He added that he was accused of organising an unsanctioned rally and resisting police.

Navalny’s lawyer Veronika Polyakova told AFP that a Moscow court would convene next Friday to hear his case.

In May 2012, tens of thousands took to the streets to protest Putin’s inauguration for a third Kremlin term, with rallies descending into clashes with police.

Criminal charges were brought against around 30 demonstrators and many of them were sentenced to prison terms of between 2.5 years and 4.5 years.