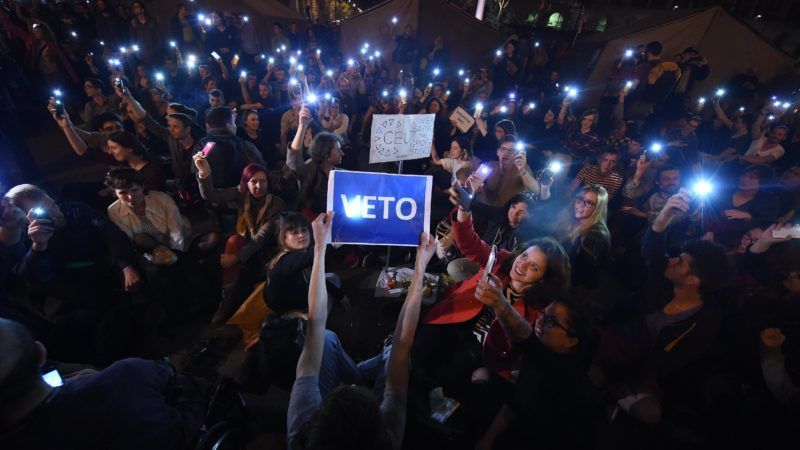 A demonstrator holds up a banner reading 'VETO' as they protest against an amendment of the higher education law, seen by many as an action aiming at the closure of the Central European University, founded by Hungarian born American billionaire businessman George Soros, in front of the Parliament building. Budapest, 4. [EPA/ZOLTAN BALOGH]

The English-language Central European University (CEU), set up in 1991 after the fall of communism, has long been seen as a hostile bastion of liberalism by Prime Minister Viktor Orbán’s government.

MPs in the 199-seat parliament, dominated by Orbán’s Fidesz party, voted 123 in favour and 38 against the legislation affecting foreign universities operating in Hungary.

The new rules ban institutions outside the European Union from awarding Hungarian diplomas without an agreement between national governments.

They will also be required to have a campus and faculties in their home country – conditions not met by the CEU.

Failure to comply would mean the CEU could not accept new student intakes from 2018, and possibly close by 2021.

The CEU said Tuesday it would contest the constitutionality of the bill.

“The new law puts at risk the academic freedom not only of CEU but of other Hungarian research and academic institutions,” the university said in a statement.

The bill is seen as a fresh attack on the Hungarian-born philanthropist Soros, 86, often accused by Orbán of seeking to undermine Europe by backing open borders and pro-refugee policies.

The legislation, put forward last week and rushed through parliament in a fast-track procedure, triggered a large protest in Budapest on Sunday and has drawn international condemnation.

The US State Department had called for the proposal to be withdrawn, while an open letter was signed by over 900 academics around the world including 18 Nobel prize-winning economists.

“If we want to be a shining beacon of human rights in the world… then Europe can’t remain silent when civil society members like the Central European University in Budapest are being stifled,” German President Frank-Walter Steinmeier said yesterday in a speech to European MPs in Strasbourg.

Orbán said Monday (3 April) the future of the CEU depends on the conclusion of a treaty between the governments of Hungary and the United States within the next six months.

The right-wing strongman has accused the university of “cheating” and of having an “unfair advantage” over local institutions – allegations rejected by the CEU as “defamatory”.

Registered in New York state, the CEU teaches over 1,400 students from more than 100 predominantly central and eastern European, as well as post-Soviet Union nations.

It ranks among the top 200 universities in the world in eight disciplines, including top 50 rankings in political science and international studies.

Within five days, President Janos Ader must either sign the legislation into force or order a review by the constitutional court.

Human Rights Watch on Tuesday called on Ader not to sign the bill, denouncing what it said was Hungary’s “contempt for critical voices in society”.

Since coming to power in 2010, Orbán has launched contentious sweeping reforms targeting independent institutions like the media and the judiciary.

A law clamping down on foreign-funded non-governmental organisations, including many by Soros, is expected to go before parliament later this month.

I've just realised that @georgesoros is such an #enemy for #Orban as #Gulen is for @RT_Erdogan, he calls him the 'shadow power'. #CEU

What is FIDESZ still doing in EPP? This question comes back every now and then. Now after the HU parliament passed a law restricting CEU…