The President of Equatorial Guinea Teodoro Obiang speaks during a meeting with members from a delegation from the Community of Portuguese Speaking Countries (CPLP), responsible for the observations of the Legislative and Municipal Elections, at the Presidential Palace in Malabo, Equatorial Guinea, 10 November 2017. [Mario Cruz/EPA/EFE]

Equatorial Guinea’s public prosecutor is seeking the death penalty in the trial of 147 opposition activists accused of “rebellion,” their lawyer said yesterday (14 February).

The activists, including senior officials of the main opposition party, the Citizens for Innovation (CI), were arrested following elections in November.

“The prosecutor is requesting the death penalty against all the opponents,” said lawyer Fabian Nsue.

Earlier this month, the European Union condemned what it described as “a sharp decline” in human rights in Equatorial Guinea following the election and said trials should be fair and in line with international norms. 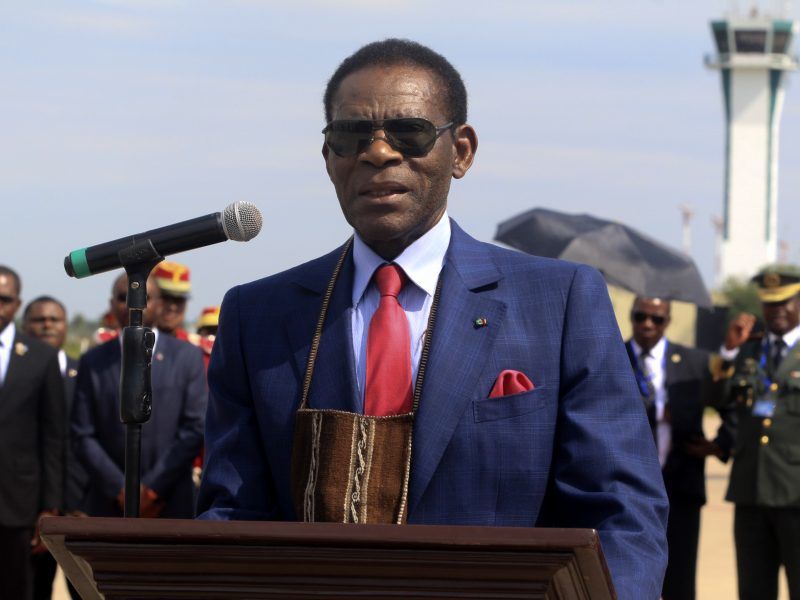 The European Union has criticised “a sharp decline” in human rights in Equatorial Guinea where an opposition figure died in custody and over 130 people have been detained since elections last year.

President Teodoro Obiang Nguema, who seized power in the oil-rich former Spanish colony in 1979, has repeatedly been accused of brutal repression as well as electoral fraud and corruption.

The defendants are being tried at the High Court in the president’s home town of Mongomo on charges of “rebellion, attacks against authority, public disorder and serious injury and damage,” according to Nsue.

Diplomatic sources confirmed the trial was taking place but authorities did not respond to an AFP request for comment.

The CI said about 30 defendants could not stand up at the trial on Tuesday because they had been “tortured” while in detention at police headquarters in the capital Malabo, nicknamed “Guantanamo”.

International cartoonists draw in support of, and in solidarity with, #EquatorialGuinea cartoonist Eson Ramon Ebale, imprisoned now for over four months. Cartoon by @JRMora #FreeNseRamon pic.twitter.com/8HDtTAg8vM

The prosecutor “wants to hide or to silence the atrocities and the brutality of the crimes of torture… we shall go to the international courts and the ICC (International Criminal Court) for crimes against humanity,” said CI in a statement.

The CI warned that if nothing is done to help the 147 on trial then “all of them will die like Santiago Ebee Ela”.

Nguema has said his death was not due to ill-treatment and promised an investigation. The EU has also called for an inquiry.

The ruling Democratic Party of Equatorial Guinea maintained its grip on power in last November’s vote, which was widely criticised by the opposition as fraudulent.

The ruling party won 99 of the parliament’s 100 seats, while CI won the remaining seat.

On January 3, Malabo announced that security forces had foiled an attempted coup on December 24, after the arrest of about 30 foreign armed men just inside Cameroon at the junction with Gabonese and Equatorial Guinean territory.

In the mid-1990s, Equatorial Guinea became one of sub-Saharan Africa’s biggest oil producers. But little of the wealth has trickled down — about two-thirds of its 1.2 million people live below the poverty line.

Equatorial Guinea is oil-rich, but most of the wealth is lining the pockets of its dictator and his friends. Satirizing the situation could land you in jail. https://t.co/hlogoTYNNA

In 2015, Nguema announced a referendum would be held on the death penalty but the vote has never taken place.