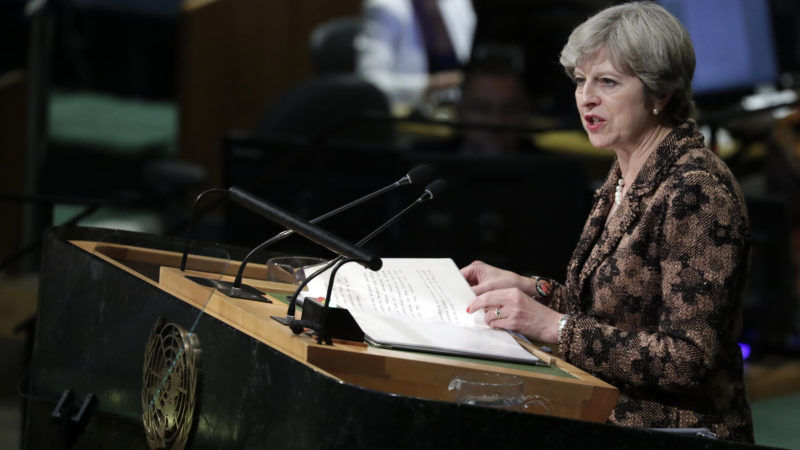 Leaders of France, Italy and the United Kingdom urged social media companies on Wednesday to more swiftly remove “terrorist content” from the internet, with the aim of stopping it from being uploaded in the first place.

“The tech companies have made significant progress on this issue, but we need to go further and faster to reduce the time it takes to remove terrorist content online,” British Prime Minister Theresa May said in a speech to the United Nations General Assembly of world leaders in New York.

She said there was a need “to increase significantly the efforts to stop (extremist content) being uploaded in the first place”.

French President Emmanuel Macron and Italian Prime Minister Paolo Gentiloni later pushed in a separate event hosted by May for such content to be removed swiftly.

“This is what must be done. In one hour the content must be identified, analysed and withdrawn to avoid it being broadcast widely. Experience shows that this is possible,” said Macron, speaking through an interpreter.

“We have a real battlefield for hearts and minds and (it) is the web,” Gentiloni said.

Prime Minister Theresa May is hosting #UNGA event on preventing terrorist use of the internet – watch live: https://t.co/YCzuTTNrNm

He said economic and privacy issues were a hurdle in this process, “but we also have to know, if we are aware of the fact that this battlefield is so relevant, that we can’t reduce our ambition because of the difficulties”.

Several websites across the internet list ingredients for making bombs or instructions on how to use vehicles to attack pedestrians.

Online retailer Amazon.com said on Wednesday it was reviewing its website after an investigation found it could help users buy the ingredients to make a bomb using its “Frequently bought together” and “Customers who bought this also bought” features.

The European Union has threatened legislation if internet companies do not better police what is available on the web.

“Removing all of this content within a few hours – or indeed stopping it from appearing on the internet in the first place – poses an enormous technological and scientific challenge,” said Kent Walker, general counsel for Alphabet Inc’s Google.

Europe’s top human rights court will rule on Thursday (19 July) whether online videos considered by a Belgian court to be Islamist hate speech should be allowed under free speech provisions.

“The haystacks here are unimaginably large and the needles are both very small and constantly changing.”

Walker spoke on behalf of Facebook Inc, Microsoft Corp, Google subsidiary YouTube and Twitter Inc, all members of the Global Internet Forum to Counter Terrorism created in June under pressure from governments in Europe and the United States after a spate of militant attacks.

Its aim is to share technical solutions for removing extremist content and work more closely with counter-terrorism experts.

Walker said between August 2015 and June 2017, Twitter had suspended almost a million accounts for the promotion of terrorism, and that the use of technology and artificial intelligence had allowed Facebook to root out “terrorist clusters”.