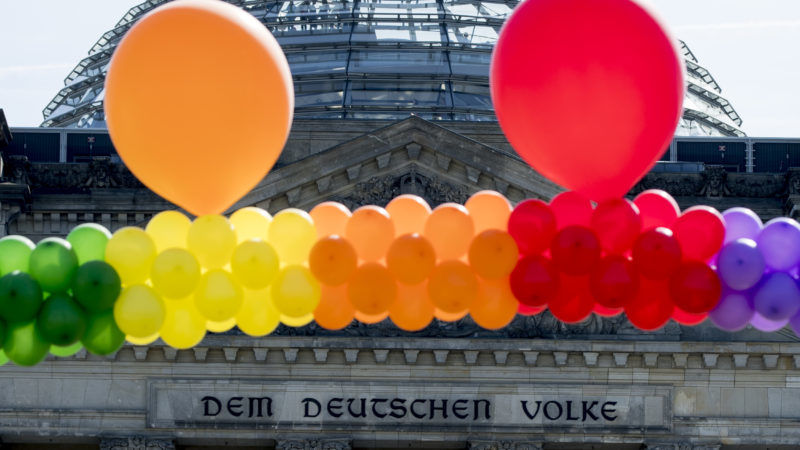 Balloons in front of the Bundestag, in honour of the International Day Against Homophobia, Transphobia and Biphobia. Berlin, 17 May. [Carsten Koall/EPA]

Speaking at a forum Monday evening (26 June), Merkel said she was open to a vote of conscience on the issue, in which lawmakers are freed from toeing the party line – and in which the reform would almost certainly pass.

Germany's Merkel backs away from party's 'no' to gay marriage https://t.co/bbR6MppvLQ

Previously, the leader of the centre-right Christian Democrats (CDU) had repeatedly voiced her personal reservations about full marriage rights, including joint adoption, for same-sex couples, citing “the well-being of the children”.

Merkel’s shift comes as polls show that large majorities of German voters, and all other mainstream parties, are in favour of allowing same-sex marriage, which has been legalised in many other major Western democracies in recent years.

Germany currently allows so-called civil unions, which were legalised in 2001 under a green-left government. They grant homosexual couples equal rights in many areas such as tax to inheritance rules, but do not allow joint adoptions.

Merkel’s about-turn opens the door for her CDU to form potential alliances after the September 24 vote, with either current partners the Social Democrats (SPD), the Greens or the Free Democrats (FDP), who all favour gay marriage.

Only the populist and anti-immigration Alternative for Germany (AfD) party opposes same-sex marriage, pushing instead what it calls traditional “family values” and urging German women to have more children.

Merkel said her thinking on the issue had shifted after a “memorable experience” when she recently met a lesbian couple who care for eight foster children in her Baltic coast electorate.

Merkel used a characteristically vague formulation to drop the bombshell news: “I would rather like to shift the discussion in a direction of a vote of conscience rather than imposing anything from the top.”

In her comments at the forum presented by the women’s magazine Brigitte, Merkel voiced a policy position which she had previously cleared with her conservative Bavarian allies the CSU, according to national news agency DPA.

The words sparked a flurry of reactions on social media overnight, with the #EheFuerAlle (MarriageForAll) hashtag trending on Twitter, and the news dominated morning radio and TV bulletins.

to celebrate angie taking back her negative stance on #LoveisLove #Ehefueralle here's my favorite image of her pic.twitter.com/y8RWPkYVUK

CDU lawmaker Stefan Kaufmann tweeted: “Thank you, Angela Merkel! How liberating! If it were up to me, we could have the vote this week!”

The head of the government’s anti-discrimination agency, Christina Lueders, said that lesbians and gays “should not have to wait for many more months” for a decision.

She said a survey by her office had found that 83 percent of Germans favour same-sex marriage.

A demand for an urgent vote before the Bundestag starts its summer break Friday evening was echoed by many other MPs.

“Anyone who really wants equality should now allow a vote on marriage for all,” said Renate Kuenast of the Greens, who have campaigned for gay rights for decades.

The leader of the group of gay and lesbian lawmakers within the CDU-CSU bloc, Alexander Vogt, hailed Merkel’s comments as a “paradigm shift” and told AFP that “now there is no way back”.

Merkel’s comments came after the SPD declared Sunday (25 June) that same-sex marriage would be a red line issue for any future coalition.

Over the past four years, Merkel’s coalition government, in which the SPD is the junior partner, had rejected voting on several gay-marriage bills submitted by the upper house, the opposition Greens and the far-left Linke parties.

The SPD’s top election candidate, former European parliament president Martin Schulz, sought to recapture the initiative Tuesday and vowed that his party would force a vote on the issue before the end of the week.