Protesters shout slogans and hold placards reading "NO, it is not finished, just starting," during a rally against the referendum results. Istanbul, 19 April. [Sedat Suna/EPA]

The narrow victory of the ‘Yes’ campaign in Sunday’s referendum (16 April) handed Erdoğan sweeping new powers – most of which will come into force after 2019 – but was bitterly disputed by his rivals. 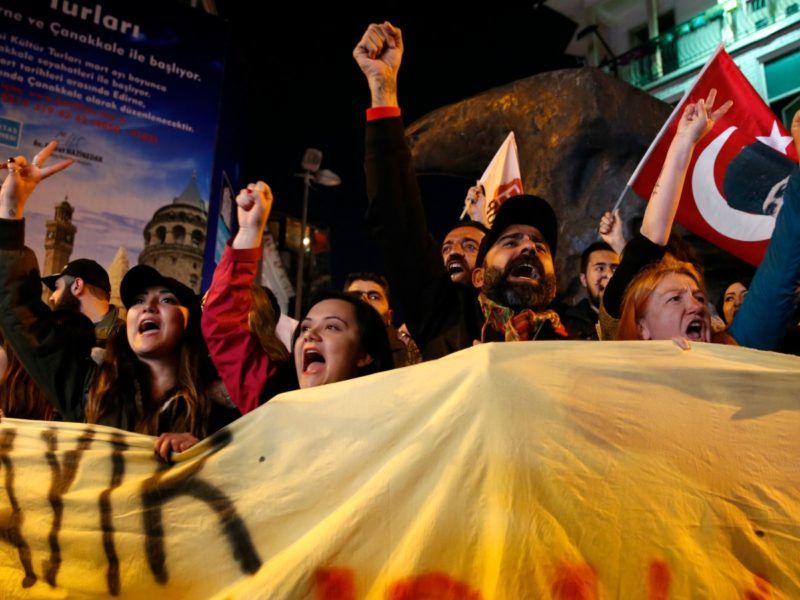 The controversy has stoked further political tensions over the rule of Erdoğan, who has dominated Turkey since becoming premier in 2003 and president in 2014.

The main opposition Republican People’s Party (CHP) and the pro-Kurdish Peoples’ Democratic Party (HDP) had asked that the poll be scrapped on Tuesday (18 April) over alleged violations.

Although the ‘Yes’ camp won with 51.41%, it was a narrower-than-expected victory with the opposition claiming the outcome would have been reversed in a fair poll.

Ten members of the Supreme Election Board (YSK) decided against annulling the vote, while only one voted in favour, the board said in a statement.

To the dismay of opposition parties and ‘No’ supporters, the YSK made a last-minute decision on Sunday to accept ballot papers in envelopes without an official stamp.

International observers from the OSCE and the Council of Europe rights watchdog denounced the move, saying it “removed an important safeguard”.

There have been daily street protests in anti-Erdoğan neighbourhoods in Istanbul since Sunday’s referendum, with thousands chanting slogans and banging pots and pans in an angry show of discontent.

A crackdown has begun on people protesting the legitimacy of Turkey's referendum. Dozens arrested in dawn raids https://t.co/1TcBM4pROI

Among them was Mesut Gecgel, the Istanbul chairman of the leftist Freedom and Solidarity Party (ODP), which is not represented in parliament.

The party said he was detained on accusations of “agitating the public” by claiming the ‘Yes’ vote was illegitimate.

Gecgel’s lawyer Deniz Demirdogen told AFP that anti-terror police raided the suspects’ homes before dawn, saying 16 people were detained so far but arrest warrants had been issued for 38.

Describing the accusations as “strange”, he added: “They are accused of provoking people to question the legitimacy of the ‘Yes’ in the referendum.

“But there’s no such crime definition in the penal code.”

Speaking in Ankara earlier, Prime Minister Binali Yıldırım said the matter of the election result was closed and warned against further protests.

“Turkey is a state of law… and there can be no talk of anarchy, activities in the street,” he said.

“I call on people not to give in to provocations or get caught up in incitement.”

CHP spokeswoman Selin Sayek Boke vowed that the party would use all means to challenge the result and called for a rerun of the vote.

“We will use all the legal paths and all legitimate democratic rights… No-one should doubt this,” she told reporters in Ankara, saying such steps could even include “withdrawing from parliament”.

But Levent Gok, the CHP’s parliamentary group leader, later rejected the idea of boycotting parliament, saying it would use “all legitimate means” to protect the parliament.

“From now on, covers without cartoons will also be counted as valid,” said the caption, in reference to the controversy over the counting of unstamped ballots.

The referendum has also caused new friction in Turkey’s relationship with the European Union, which it has long sought to join but which gave the ‘Yes’ victory the most lukewarm welcome. 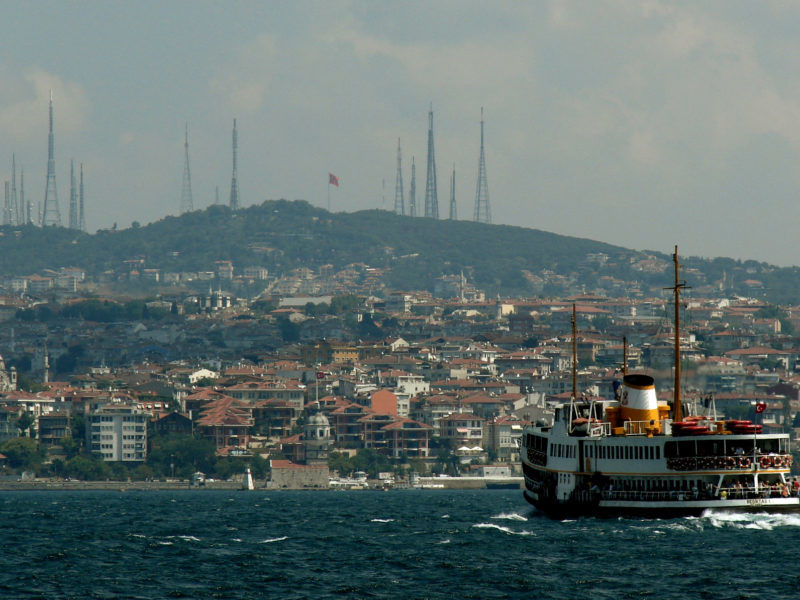 By contrast, Donald Trump joined Russian President Vladimir Putin in congratulating Erdoğan, with the Turkish strongman expressing optimism over his relationship with the new US leader.

After referendum (condemned by EU) allowing Erdogan to rule until 2029 Turkey was congratulated by:
Azerbaijan
Qatar
Iran
Belarus
Russia
USA

Foreign Minister Mevlüt Çavuşoğlu told reporters in Ankara that Trump and Erdoğan would meet in May before a NATO summit.

“The way President Trump is approaching these matters makes us happy,” Erdoğan told CNN in an interview.

#TurkeyReferendum – We call on the authorities to launch transparent investigations into alleged irregularities. pic.twitter.com/WsCnkINh2m