Women chant slogans as they hold up a banner that reads "Women Say No Altogether" in reference to the upcoming referendum. Istanbul, 13 April. [Cem Turkel/EPA]

“If there is a ‘Yes’ in the referendum, it will be much harder for us to be reinstated in our jobs. And these removals will probably expand.”

After an abortive coup in July, Turkish authorities arrested 40,000 people and sacked or suspended 120,000 others from a wide range of professions including soldiers, police, teachers and public servants, over alleged links with terrorist groups.

The vast majority of those people, like Yoruk, say they have nothing to do with the armed attempt to overthrow the government, and are victims of a purge designed to solidify the power of an increasingly authoritarian leader.

The referendum has bitterly divided Turkey. Erdoğan argues that strengthening the presidency would avert instability associated with coalition governments, at a time when Turkey faces security threats from Islamist and Kurdish militants. 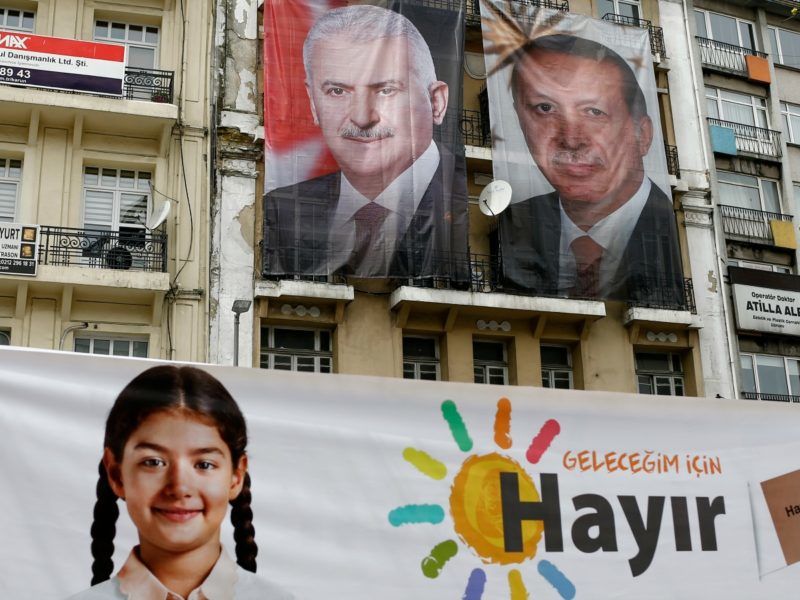 Turkey's 'No' campaign defiant despite obstacles

As the clock ticks down to Turkey’s landmark referendum Sunday (16 April) on expanding President Recep Tayyip Erdoğan’s powers, it’s impossible to miss the posters for the government-backed ‘Yes’ campaign in Ankara and cities across the country.

But his critics fear further drift into authoritarianism, with a leader they see as bent on eroding modern Turkey’s democracy and secular foundations.

Mass detentions immediately after the attempted coup were supported by many Turks, who agreed with Erdoğan when he blamed US-based Islamic cleric Fethullah Gülen for orchestrating the putsch which killed 240 people, mostly civilians.

But criticism mounted as the arrests widened to include people from all walks of life such as midwives and prison guards in remote parts of Turkey, and to pro-Kurdish opposition lawmakers, effectively leaving the nation’s third-biggest party leaderless.

“These purges are not individual cases at all. This is a systemic phenomenon empowered by an environment of lawlessness. And in the case of a ‘Yes’ win that will only get worse,” said Omer Faruk Gergerlioglu, a doctor and rights activist dismissed earlier this year.

A report by opposition parliamentarian Zeynep Altiok said that the purge of public employees since the coup had deprived 1.5 million students of their teachers. More than 600 companies were seized by the state, 140,000 passports were revoked and 65 elected mayors ousted, it said last month.

In addition, more than 2,000 journalists were sacked and scores of TV and radio stations, news agencies and newspapers were shut down.

United Nations rights experts said on Thursday those closures had undermined the chance for informed debate on the referendum, and a state of emergency imposed after the failed coup had been used to justify repressive measures which may be just the beginning if Erdoğan wins greater powers on Sunday.

“Given the arbitrary and sweeping nature of the emergency decrees issued since July 2016, there is serious concern that such powers might be used in ways that exacerbate the existing major violations of economic, social and cultural rights,” the UN experts on education, poverty and free speech said.

Turkey immediately accused the United Nations of meddling in its internal politics.

Turkish Foreign Ministry spokesman Huseyin Muftuoglu said the UN statement was “worrisome” and its timing indicated a deliberate political approach ahead of the referendum.

“The fact that the statement came right before the April 16 public vote and contained political comments strengthens the view that this approach is deliberate,” Muftuoglu said in a statement. He said Turkey was calling on the United Nations to continue constructive dialogue and cooperation.

After a decade as Prime Minister, Erdoğan assumed the presidency in 2014. He has already transformed what had been a largely ceremonial role into a platform for action, and the referendum would formally grant him executive powers once reserved for the cabinet that answers to parliament.

He has also promised to reinstate the death penalty if the ‘Yes’ vote wins, almost certainly ending Turkey’s decades-long bid to join the European Union, which bars executions. Turkey’s EU candidate status has been one of the brakes on Ankara, requiring steps to improve human rights and transparency.

Aysegul Karaosmanoglu, a headscarved teacher suspended two days after the coup and sacked in September, said the coup was used as an excuse by the government to purge dissidents. A “Yes” win would probably broaden and deepen that crackdown, she said.

“It could create an environment for all dissidents to be hanged, or denied any chance of life,” Karaosmanoglu, 45, said. “I hear they are opening lots of new prisons. I guess they’ll put people like us there”.

She was speaking at a rare gathering in Istanbul this week of purged civil servants and families of those jailed, who came together to publicise their plight. They rejected any link with the failed coup, and some said they were sacked for causes as remote from any real wrongdoing as simply being members of a union which was deemed a Gülenist institution.

Gülen, who lives in self-imposed exile in Pennsylvania, denies involvement in the coup. He is a former Erdoğan ally whose network was declared a terrorist group by Turkey’s national security council two months before the failed coup.

Ahmet Erkaslan, a gendarmerie officer who was shot by Kurdish militants during a security operation in Diyarbakir’s Sur district last year, says he was sacked from his job without being given a reason. That has transformed him from a war veteran to a so-called terrorist, overnight.

“I still remember the whistle of the bullets as I lay on the ground,” Erkaslan said.

He said he expects it will be difficult to get his job back, regardless of how the country votes in the plebiscite.

“Even if the removals stop, they would no longer employ people who are critical of them,” he said.