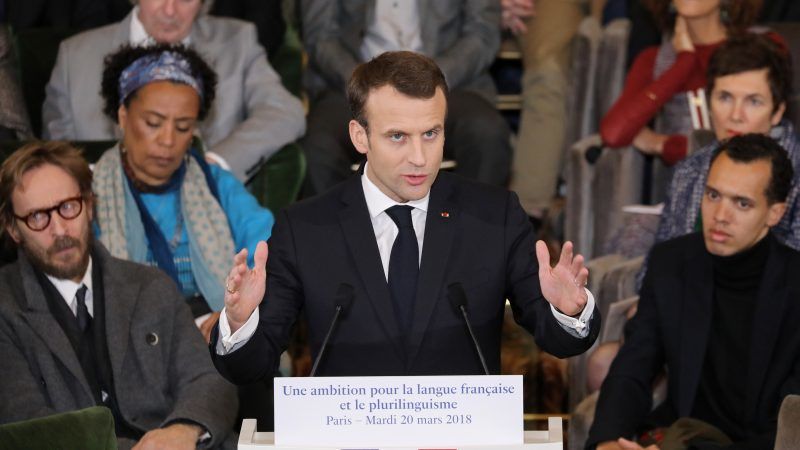 France's President Emmanuel Macron gives a speech to unveil his strategy to promote French as part of the International Francophonie Day before members of the French Academy (Academie Francaise) and other guests at the French Institute, in Paris, France, on 20 March 2018. [Pool/EPA/EFE]

The English language is too dominant in Brussels, especially with Britain soon to exit the European Union, French President Emmanuel Macron said yesterday (20 March) as he vowed to fight for a wider use of French in EU institutions and abroad.

There are some 274 million French speakers worldwide, making it the fifth most widely spoken language and the fourth most used language on the internet, according to the Francophonie organisation of French-speaking countries.

French was long dominant at EU headquarters in Brussels but English has become ubiquitous in European institutions, especially since eastern European members joined the bloc in 2004.

Britain, Europe’s second largest economy and by far its biggest English-speaking country, is due to leave the EU next year.

“The situation now is quite paradoxical. English has probably never been as present in Brussels at the time when we are talking about Brexit,” Macron said.

“This domination is not inevitable. It’s up to us to set some rules, to be present, and make French the language with whom one has access to a number of opportunities,” Macron said, quoting Europe’s relationship with French-speaking Africa.

Macron, who, unlike most previous French leaders often speaks in English in public when abroad, said this was not a move against the use of English but one to promote multilingualism.

He said he was in favour of everyone in Europe learning two foreign languages and that France would increase its efforts to teach French to European officials.

Macron also announced steps to promote the teaching of French abroad, including through its network of French lycées as part of a series of measures.

Macron insisted on the importance of extending, especially on the Internet, the broadcasting abroad of French media such as TV5 Monde and especially France Médias Monde (France 24, RFI, RMC Doualiya), which reaches 135 million people every week, with the goal of reaching 150 million by 2020.

He also stressed the role that the French media can play to help fight fake news.

“The media in French must appear as a trusted media”, Macron, noting that “AFP in this respect can play a central role because its global network is exceptional. To make an alliance on this subject with the major French-language media would be a considerable asset”, he said.

European Commission President Jean-Claude Juncker tweeted that he was “an enthusiastic backer of multilingualism.

“Why would Shakespeare’s language be superior to that of Voltaire?” Juncker told France 5 TV channel. “We are wrong to have become so anglicised,” he said, in French.

But Juncker added: “English has become a daily working language within the EU institutions. Brexit won’t change anything to it. Because those who don’t come from the western part of Europe have become used to speaking in English.”

On a visit to the west African country of Burkina Faso in November, Macron appealed to Africans to resist the lure of English and make French “the first language in Africa and maybe even the world in the coming decades”.

The International Francophonie Organisation has forecast that because of explosive population growth in Africa, over one billion people will live in French-speaking countries by 2065, second only to countries that speak English.

In Africa, it predicts that French will overtake English by 2050.