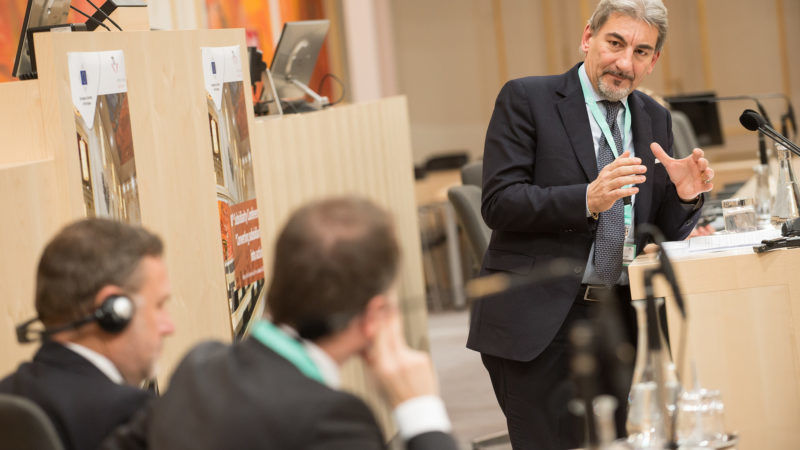 The European Union must strengthen inter-parliamentary dialogue at national and above all regional level. Otherwise, it risks alienating even further European citizens who want a say in the decision-making process, says Raffaele Cattaneo in an interview with EURACTIV.

Raffaele Cattaneo, President of Lombardy’s regional council and of the Conference of European Legislative Assemblies (CALRE).

He spoke with EURACTIV’s editor-in-chief Daniela Vincenti on the sidelines of the subsidiarity conference held in Vienna on 4 December.

Do you believe that the principle of subsidiarity is well understood in Europe?

The principle of subsidiarity is like the Copernican revolution. It sits at the basis of how we must build any state institution, but in the case of Europe, it has been completely overturned.

The reduction of this principle to an administrative procedure such as the Early Warning System with its yellow, orange, eight-week cards, the bureaucratic focus on respecting the rules, is just a symptom of how Europe is losing its soul and it is turning into a mechanism that hides the flaws of its political dimension behind the supposed optimal functioning of its bureaucratic machine.

To limit the bureaucratic aspects it is necessary to reform the institutional structure, and renegotiate the treaties, which is not on the agenda. What can this task force on subsidiarity concretely do with the limited time it has available [six months]?

I am also worried that the task force, due to the limited time it has before it and the way it is composed, will risk simply retouching the procedures. I hope instead that the task force has the ability to introduce a vision with concrete implications.

I suggest three things. The first is to strengthen inter-parliamentary dialogue within individual member states. Today, Europe is becoming the Europe of nation states – a mediation of 28 today, tomorrow 27 countries. But within these nation states the relationship with the local dimension has weakened and must be salvaged.

For example, Lombardy works systematically with the Senate [Italy’s upper chamber], but not with the chamber of deputies. We tried, but we did not succeed. This is Italy but it is the same in other European countries.

I believe we should institutionalise the involvement of regional legislative assemblies with legislative powers closer to the citizens.

The Committee of the Regions is important but remains little more than a consultative place for one of the many interests with which Europe has to deal with, there is no political recognition of  those who represent the voice of the regions and local authorities in Europe.

You are involved at the end of the policy process…

Exactly. We only express opinions and some, like the Economic and Social Committee, believes that we should be included in the lobby regulation because they see us as a lobby like any other.

This idea is crazy. It is a centripetal idea of ​​Europe, which has nothing to do with the will of the founding fathers or even with the possibility of reversing the tendency, because people’s reaction is to say “Enough with a European Union that is aloof and distant, let’s go back to the little homelands, give us a closer government”.

And above all, this is true in the strongest regions of Europe. Where are the strongest autonomist tendencies: Catalonia, Flanders, Scotland, Lombardy, Veneto – that is, not in the poorer but stronger regions, which do not feel the possibility of constructing Europe in a way that is relevant to them.

If Lombardy, which has ten million inhabitants, counts less than Cyprus or Estonia -with all respect for Cyprus and Estonia- it is clear that this tears Europe’s fabric.

Behind this there is a very serious policy. I believe the role of the Committee of the Regions is to become a sort of Senate for European regions. Today it is not on the agenda, but it should at least be part of the political debate.

Today, the Commission conceives the relationship with local administrations only near the end of the policy cycle: “I make the measures, then I send them to you and you tell me if they are respectful or not of your competences.” But It does not consult us when conceiving policy.

But to anticipate this exchange, the treaties would need to be changed.

The Parliament and the European Commission should open a direct channel with local authorities.

But if this is not structured and institutionalised, is it not likely to increase the confusion?

Simplification does not happen with centralization. This idea draws from enlightenment. Since there is a complex problem, I reduce the decision-making to one central actor and solve the problem for everyone. Reality does not work that way. The market doesn’t either.

To give a concrete example, the complexity of the market is balanced by the plurality of actors – not by a big monopolist deciding for everyone else.

I believe it is possible to build on an institutional dynamic that simplifies by starting from the ground up, not on the top. This is the challenge we are facing.

I am adamant that the current model of Europe does not satisfy European citizens. There are a million signs.

We can disagree from the cultural, political, ideological point of view. But we have to discuss how to change a model which is currently in crisis.

Are you in favour of giving regions more autonomy, including Catalonia?

Yes, but there is a difference between independence and autonomy. We must give more autonomy, while respecting national and European unity.

Autonomy is not some abstract notion: it means applying European principles according to every region’s specificity.

For instance, the Bolkenstein directive sets some important shared principles on free trade. But if it goes to the point of regulating local markets in lombardy, perhas we must take into account the history and local traditions. These cannot be trampled on in the name of an abstract principle – otherwise we descend into irrationality.

We can bring this idea to the relationship between national and regional governments. It doesn’t mean to disrupt unity – because unity is one thing, but centralisation is another.

But it does mean a federal system …

Three, four hundred years ago there were no big nation states in Europe – those are born between 100 and 300 years ago.

Europe’s map was about local governance, and on top of that sat the empire, which stretched much further.

We come from a different tradition from other regions in the world, and which sometimes resurfaces. Behind Catalonia, there is the kingdom of Aragon.

Certain themes are in the DNA of Europeans, and we can’t simply ignore them or constrain them into neat, abstract institutions, because then they resurface and bite back.

We need an order more in line with the EU’s motto: united in diversity.

What is the best example of unity in diversity? A symphonic orchestra. Every one plays their instrument with all its peculiarities, but all play to the same tune.

What I see in Brussels is many pipers who want us to all play the same pipe, and to their tune.

We have to look out: because the tale of the Pied Piper who transforms children into rats and drowns them in the river is a metaphor for a loss of creativity and originality.

Is the answer a Europe of the regions?

I certainly hope so. But that was the idea of our founding fathers. Not a Europe of nation states, but of people, and regions. A unity built on something wider than artificial nation states, but more geared toward current challenges.

States and institutions answer to historical needs. Nation states were current three or four hundred years ago, and they answered the needs of those generations.

Today, I don’t believe that the scale of the challenges we face can be solved at a national level.

If we look at the three challenges that President Juncker listed as the basis of Europe’s current crisis, these are the economic crisis, migration, and terrorism. None of these can be answered at a local scale, but they need a global response – at least in Europe, and also at a local level.

Because if I need to combat terrorism in Milan or Brussels, I can’t talk in abstraction.

And what about the national level?

The national level has to get rid of certain competences and give them to Europe and to local authorities, if it wants to survive. Otherwise it will be undermined, as it happened in Spain: it is the perfect example of national authority being questioned.

I believe this is a mistake, because we should build starting from the past – and not by destroying it.