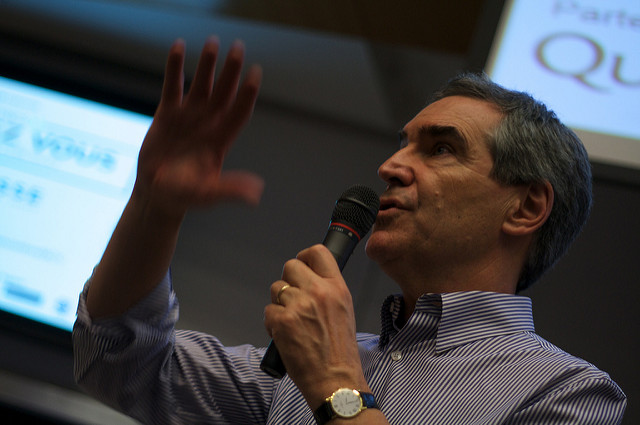 Liberals were too confident that history was on their side, Canadian professor, writer and politician Michael Ignatieff says. That is why they are panicking after Donald Trump won the US elections. But the “tone of alarm is excessive”, Ignatieff told euractiv.com in an interview.

Michael Ignatieff is the President and Rector of Central European University (Budapest). The former head of Canada’s Liberals, his party registered its worst result in its history in the 2011 Federal elections.

Will there be real consequences following Donald Trump’s victory or are we panicking too fast?

I think there is a lot panic. If you are a Western, progressive liberal, you have gone from believing history is on our side, and on the side of liberal democracy, free institutions, tolerance, and multiculturalism, to suddenly believing that history is against us, and Trump is the harbinger of a new history which goes in a radically different direction. I don’t believe either story was ever true. We have to calm down. He is a dangerous demagogue who divides, who incites racial hostility. Those things are terrible in politics. But it would be very difficult for him to govern effectively.

If you cannot unite people, you cannot govern effectively. My concern is, in fact, that he has promised illusions to people who suffered from globalization and industrialization. Because of the divisive style, even if he wanted to, he would be unable to deliver, so we will be back in four years’ time with even more disillusion, and an angry and divided electorate.

That worries me a bit. But that is a problem with a solution. Democrats in the US have to pick someone who can appeal and connect to people who feel left behind.

You experienced the limits of being loyal to your ideas, principles, and values when entering the political arena.  Are we condemned to a continuous return of populism?

Democracy is essentially a system in which elites can lose, but know that if they stick around they can win the next time. That keeps the system stable. It is only dangerous when people feel that if they lose the elections they will not win another one. Then they are tempted to be extra-parliamentary forces or to engage in violence.

The American political system has given us an extreme choice, but I don’t think it means the system is broken. I am concerned that everybody is under the influence of money. I am concerned about the gerrymandering, or the lack of competitiveness in the system. Both phenomena get worse before they get better. But the tone of alarm is excessive.

Another thing I don’t like is that progressives like me are expressing contempt for Trump voters, saying they are stupid or they did not know what they were voting for, or they are racists. I think that is terrible.

These people made political choices that we don’t like, so what? Get over it. And those people marching in the streets saying “Trump is not my president”, sorry but that is not how the system works. He is THE president.

Speaking of elites, Europe started as an elite project, and six decades after still remains like that. Isn’t the main reason behind Europe’s ‘existential crisis’?

I don’t think there is any doubt that it is an elite project. In this room, where we are today, in the Berlaymont or whatever is called, the enthusiasm for Europe disappears when you cross the road and you go to the next bar. That is the problem. We are going to have to create a Europe that awakens genuine support and affection.

But I think it is important not to say that Europe has no support. After Brexit, my daughter was horrified by the result because she has grown up being used to freedom of movement, flying to Barcelona for the weekend, going on holiday in Spain, having good friends in Spain.

We underestimate the success of the European idea creating free movement,  that comes with certain values. The problem is that the institutions are not fighting to defend the values. We are building barbwire to keep people out. We are not dealing with exclusion inside, and we are not standing up when European values are being torn apart by governments that are EU members. Until we do that, the support for Europe will drain away.

Do you mean Hungary and Poland?

Do you think the perfect storm is possible next year, with a victory of Marine Le Pen, and a good result of Geert Wilders in The Netherlands and AfD in Germany?

We are all worried about that perfect storm. I think we don’t know. These are scenarios of disaster and catastrophe but I think that is neglecting people. Citizens of France and Germany are very sophisticated electors that know what the German and French constitutions are. When it comes down to it, they will not vote for candidates who threatened the very constitutional order of these countries.

Marine Le Pen is not a normal candidate. She wants to do things that are unconstitutional, illegal and just plain wrong. She looks like a normal candidate now but, in the election, it will be shown that she is outside the minimum democratic norms in terms of her plans to expel people. The same goes for AfD.

What people will rally to defend is the constitutional order in Germany and France. Period. I am not super-optimistic. Anything can happen. We have Brexit, we have Trump. But I think we need to get a grip here and remember that European citizens have more loyalty to their institutions that people supposed.

Is there room for optimism?

Oh yeah. I teach at Central European University. We have students from 116 countries. Every time I get depressed, I go and talk to 24-year-olds, and you start feeling better about the world.

3 responses to “Ignatieff: ‘It is terrible that progressives express contempt for Trump voters’”