“The idea that we have about Europe has a direct impact,” which means that the European Union “needs to enter a much more reflective period in order to find solutions to problems that were unimaginable before”, warned philosopher José Antonio Marina.

As an example, the Spaniard cited Brexit, and the issue of activating Article 50, which for an exclusive club only accustomed to enlargement has come as a shock. The EU’s doors are still open to new members of course.

Frans Timmermans said Europe’s social contract is broken; social mobility is a thing of the past and we have let our young citizens down. He believes urgent action must be taken to save the European Union. An interview by EURACTIV’s partner Ouest-France.

Marina added that one of the EU’s major problems is that it has not spent enough time delving into one particular issue: sovereignty.

The British, who “are very practical” and “have a clear idea of England, but not of Europe”, preferred to “regain their sovereignty, even if it makes them poorer”, insisted the Toledo-born thinker.

“Sovereignty has always been a complicated issue,” he continued. “In Europe, this debate has been diluted, it has become tired and has not been carried out well,” Marina claimed, adding that this whole concept, as well as the concept of the nation, has to be rethought.

However, he warned that regulatory system reforms have to be done carefully, because “they are tools that contain a lot of wisdom”.

Marina then alleged that the EU’s big mistake was the “euphoria” with which it launched the euro and welcomed its new Eastern European members. The Spaniard conceded that it was a “very generous process”, but “a bit hasty”.

He then turned to the EU’s “dangerous” approach to his own calling, philosophy, which he called a science that is truly European. In 2000, European leaders defined the idea of Europe in the Lisbon Treaty, leaving out the development of “critical thinking” from the basic competencies of the education system.

“To me, that seemed very serious, and I started a campaign for its inclusion; I would’ve like it if it had reached the European Parliament,” recalled Marina, who is convinced that without critical thinking, without philosophy and without the tools needed to think, it is difficult to address issues like nationalism, populism and artificial intelligence. 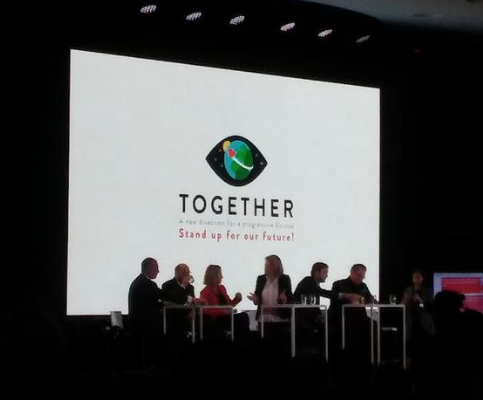 In a move to reinvent themselves, social democrats vowed on Wednesday (19 October) to set in motion a reform that would make space for young people to take centre stage.

“At stake are those who would make short-term decisions: AI or the human brain,” warned the philosopher, who believes that this is one of the immediate  challenges facing humanity.

Although it sounds like science fiction, this future is already knocking on the door. It’s called transhumanism and its followers believe that humanity can go beyond its current limitations through the use and development of technology. Marina believes that philosophy is needed to meet this world of new technologies.

New technologies are a human and cultural revolution that are as important, or even more so, than the invention of symbols, language, writing, algebra or music, insisted Marina, adding that it is of utmost importance that we think what should actually be done with these new inventions.

The philosopher added that there are precursory signs that this future is already here. For example, IBM’s Watson supercomputer or Japanese company Deep Knowledge Ventures, which has appointed an algorithm to its board of directors.

Faced with the shocks that have disrupted the European construct, a number of opinion-makers, former Commissioners, ministers, and parliamentarians have slammed the European ‘intellectual disease’ which has prevented leaders using common sense to reignite the sense of pride in the EU project – starting with the young generation.

Throughout history, humanity has “produced fictions” in order to deal with different realities, challenges and organise society, explained Marina. These include the aforementioned “sovereignty”, “natural rights”, “sovereign people” and “human rights”.

In this same vein, Marina proposes the creation of a universal constitution that would face the “serious problems” that we have and which are only set to get worse.

In this period that some have dubbed the “post-truth age”, where opinion has been glorified, the philosopher concludes that we need instruments and concepts that allow us to face the world more objectively.