Market pressure, the strong hand of EU institutions and the limits of power will determine how far the new Italian government will go in trying to shake up the eurozone’s status quo.

Pierre Moscovici, the EU’s economic affairs commissioner, often says that politicians must be popular, not populist.

He well knows the advantages and risks of both attributes. As EU commissioner, he “sold” Europe to an anxious audience in France, fired up by Marine Le Pen, the standard-bearer of populism on the continent. As the man responsible for Economic Affairs in Brussels, he was involved in the “domestication” process of Alexis Tsipras and his unorthodox Finance Minister, Yanis Varoufakis, during negotiations on the third Greek bailout.

Moscovici now faces a more difficult battle where the stakes are much higher for Europe. The troublemaker is no longer a small eurozone member but Italy, its third largest economy. But Rome bears a heavy economic burden. Any political turmoil could herald a repeat of the darkest moments of the eurozone crisis. 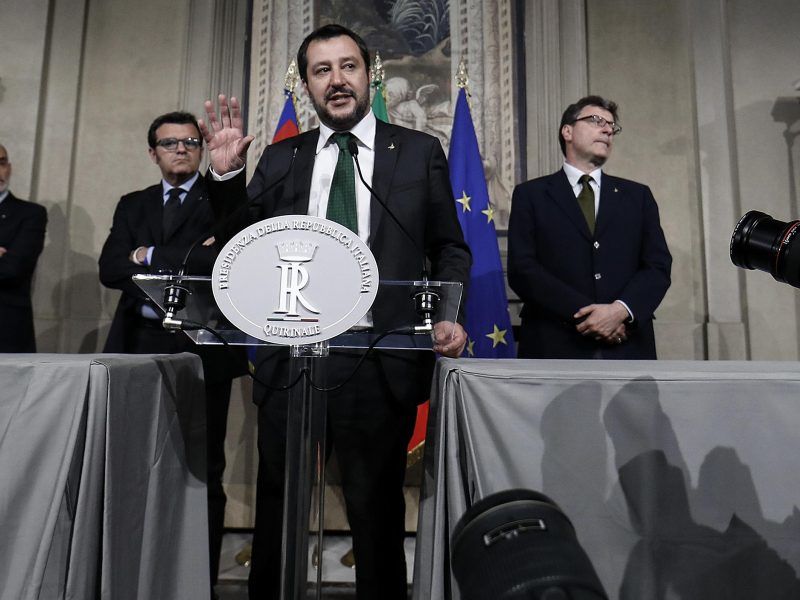 The agreement between the 5 Star Movement of Luigi Di Maio, and Matteo Salvini’s Lega may point to that outcome.  Some of the most controversial proposals were scrapped from the final document, including the request to write-off €250 billion of Italian debt, and the possibility that the country could leave the euro. A demand for “monetary sovereignty” gave way to a vague defence of a “renegotiation of European treaties”, echoing the revision of the Stability and Growth Pact demanded by Matteo Renzi in the past.

But both parties maintained the flat tax rate (15% for companies and families, with few exceptions) and a universal basic income of €780 per month. The budgetary hole could surpass €100 billion per year, some estimates say.

The EU institutions and the markets know that Italy’s economy is in serious difficulty. Its public debt (132% of GDP) and low growth (an average of -0.6% between 2006 and 2016) is second only to Greece. Its banking system has the largest amount of ‘bad loans’ (€173 billion last December) in the currency bloc.

Investors are demanding more returns to buy its sovereign debt, and Brussels is preparing its warning shots. The first round could come today, when Moscovici presents the Commission’s opinions on national budgets.

The executive has had no time to assess in detail the economic programme of the new government, as it was finalised after the cut off date, but Moscovici is hardly likely to miss an opportunity to remind the Italian executive of the EU’s fiscal rules.

EU leaders have already shown how far they are ready to go to rein in Italy and save the euro. 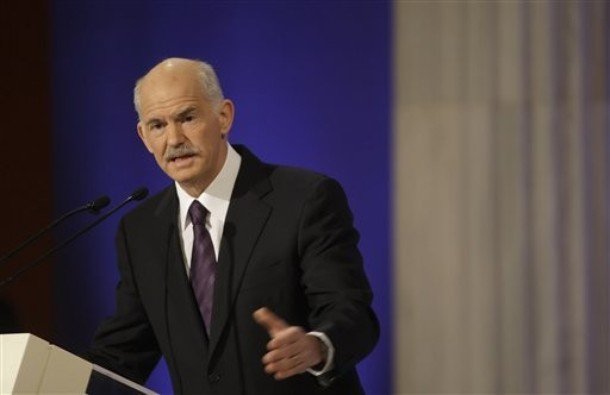 A surprise announcement by Greek Prime Minister George Papandreou that his government agreed to hold a referendum on the hard-fought deal to save his country from bankruptcy sent a wave of panic across Europe and the world.

In Cannes, in November 2011, as Greece was on the brink of leaving the euro, German Chancellor Angela Merkel and then French President Nicolas Sarkozy “had accepted Italy had to be bailed out,” the then president of the European Commission, José Manuel Barroso, told this correspondent. “It would have been catastrophic,” he added. Calm was restored by forcing the resignation of Silvio Berlusconi and the adoption of an austerity programme by Rome.

This time around, the new Italian government brings not only fears of destabilising the eurozone economy just when its expansion shows signs of weakening. It also confirms that the political momentum towards deepening the economic and monetary union is over.

The lofty speeches and promises of the summits of Bratislava, Rome and Brussels have  not resulted in anything concrete. Not even Emmanuel Macron’s impetus succeeded in bringing them to life.

The French president brought illusion but few results. It was an illusion to confuse Macron’s victory as a vote for his proposals for EU reform, as the pro-European’s narrative suggests. Most French voters picked him purely because he was a palatable alternative to Le Pen, surveys showed.

While the EU has piled up defeats in referendums (France and The Netherlands, Ireland, Greece, Denmark, The Netherlands again and especially Brexit), the magma of populist, anti-European parties gained ground in all corners of Europe, from the big economies (Germany, France) to the new members (Hungary, Poland, Czech Republic, Slovakia), and also in Austria and the Nordic countries.

Even in those countries where the populist tsunami was contained, its message has taken root among the main parties. “The principle of an ever closer union is dead and buried,” Dutch Prime Minister Mark Rutte told the world elite meeting in Davos in January last year.

The British people’s decision in favour of leaving the EU set off the alarms in Europe. But the Brexit warning was ignored in other corners where crucial battles were ongoing. “You are underestimating the importance of Brexit,” Bill Clinton repeatedly told the campaign managers of his wife Hillary, weeks before the US elections. ‘Brexit’ was the first thing that came to his lips when the victory of Donald Trump was confirmed, as Jonathan Allen and Amie Parnes wrote in their book “Shattered”.

What will happen now? Market pressure, the limits of day-to-day governing and the difficult compromises needed between 5SM and Lega, combined with the efforts to tame the new government by Brussels, Berlin and Frankfort will be strong enough to keep Italy at bay. Another Italian, the president of the ECB, Mario Draghi, could easily remind Di Maio and Salvini of the risks of ignoring the EU’s deficit and debt rules. 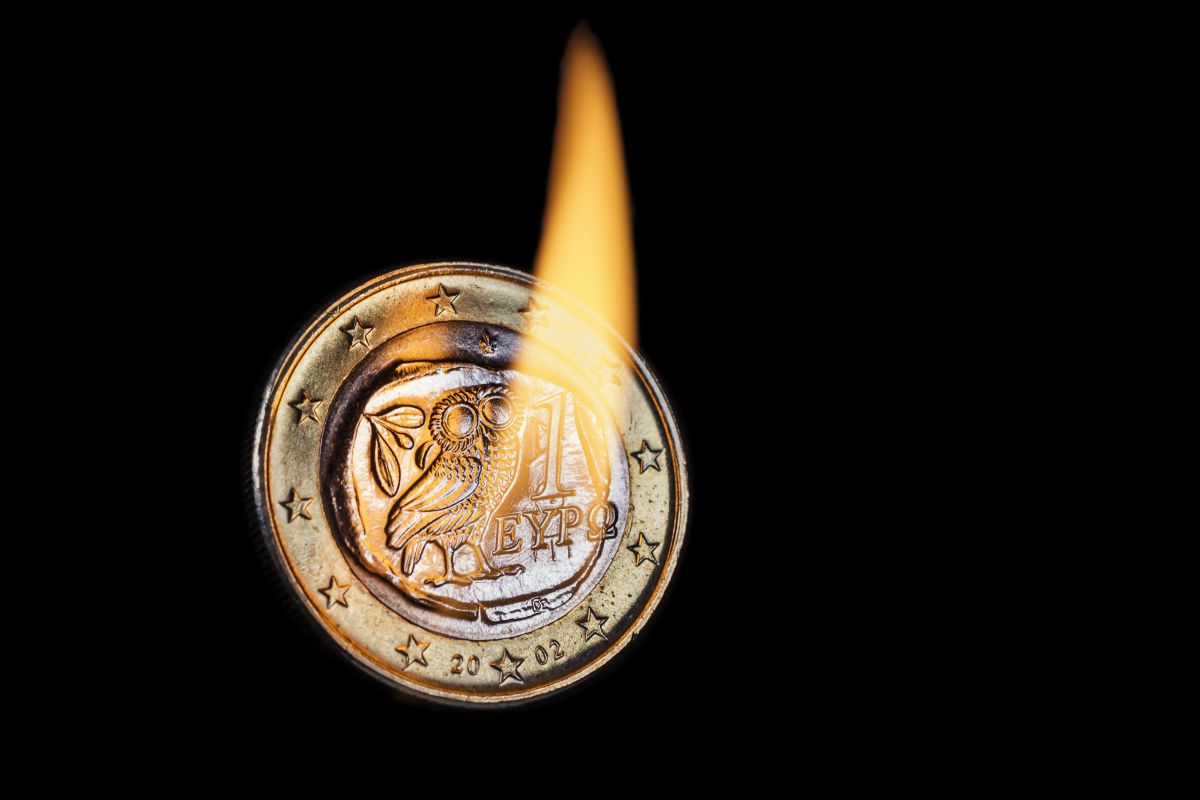 How the eurozone survived the Greek crisis

The Greek crisis has strained nerves on the eurozone debt market, but unlike four years ago there has been no contagion of financial uncertainty across the single currency bloc.

“Domestication could happen by throwing some meat or by using the whip, and I think there will be more of the latter than the former,” a longstanding EU official said.

But the Greek case shows how painful the process to tame a new government can be. The situation is also more critical for Europe now compared with 2015, when Greece’s third bailout was sealed. During the next few months, member states will face the end of the Brexit negotiations and the EU’s next multi-annual budget, and will start the pre-campaign for the elections for the European Parliament in May 2019.

In the Parliament the Italian situation is seen with “concern”, a senior official said. But he ruled out the possibility that eurosceptic and xenophobic parties could gather enough support to win the European elections, despite Le Pen’s triumph in 2014, the rise of AfD in German elections last September, and the presence of numerous eurosceptic forces and populists in the North and East of Europe.

“There will be a more open and plural Parliament, probably with only one main group, the EPP; a fall of the Socialists, partly because of the loss of British Labour; a possible rise of the liberals, thanks to Macron and Spain’s Ciudadanos; and it remains to be seen what would happen on the right side of the spectrum, as neither Nigel Farage nor Marine Le Pen will be there anymore”, explained the official.

Europe has always had time on its side. In good times, inertia and treaties led to the ‘ever closer union’. In crisis periods, integration took a leap forward. But the dynamics have changed. Europe has failed to substantially reform itself, and populism fights a war of attrition against the political establishment. And if the populist forces are not in retreat, it will mean that they are winning.