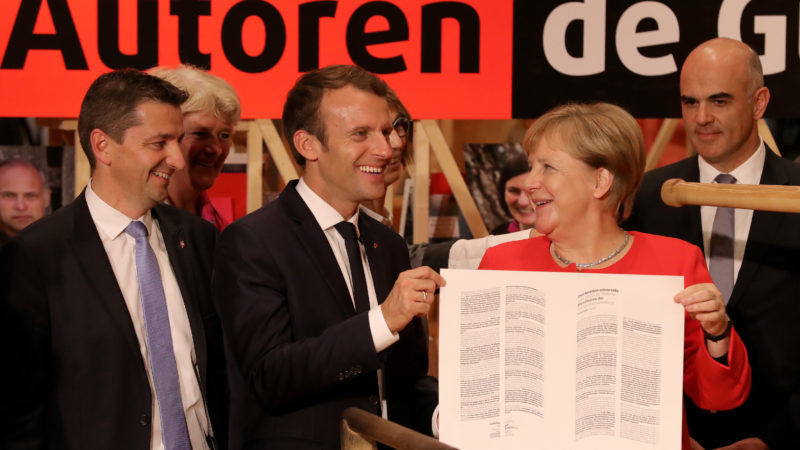 French President Emmanuel Macron on Tuesday (10 October) pleaded his case for ambitious European reforms, appealing to German Chancellor Angela Merkel to join forces with him and enter the debate.

Speaking in Frankfurt, where he opened the German city’s annual book fair alongside Merkel, Macron also stressed the importance of culture in the “redefining” of Europe.

“There is no Europe without culture,” he told the audience, highlighting the crucial role language, educational exchanges and the arts have to play in combatting “the languor” gripping the continent.

Merkel for her part praised the “close friendship and solidarity” between the neighbours.

“History shows that in order to further develop Europe, we need impulses from Germany and France,” she said.

But she stayed vague on how far she backed her French counterpart’s plans for an overhaul of the European project.

In an earlier address to university students in the western German city, Macron reiterated his desire for deeper eurozone integration, including his more contentious calls for a common budget and finance minister.

“If we are ready for common policies on security, digital infrastructure, energy, migration, the fight against terrorism, then who can explain to me why we can’t have a common eurozone budget?” Macron said.

He added that he believed European leaders had “one year” to lay out their vision of the bloc’s future in the run-up to the 2019 European Parliament elections.

“I think we need to start the debate, we have a year to clarify and draw up a common roadmap.

“This is what I would like to come and do in Germany on several occasions and what I invite the chancellor to come to France and do as well,” Macron said.

As Macron spoke, millions of French workers were on strike and thousands marched against his public sector reforms.

Merkel has so far responded cautiously to Macron’s grand vision for a more closely integrated Europe, which he first outlined in a landmark speech last month at the Sorbonne university in Paris.

The issue of a common eurozone budget is especially controversial in Germany, the biggest EU economy, which fears it will lead to a pooling of national debt with Berlin picking up the tab for poorer member states.

“No pooling of national debt”

In an interview set to appear in German media on Wednesday, Merkel said again she needed more time to study his proposals and reiterated Germany’s stance on the debt issue.

“With me, there will be no pooling of national debt,” she told the RND regional media group.

Macron was in Germany to formally inaugurate the 11-15 October Frankfurt Book Fair, where more than 7,000 exhibitors from over 100 countries are expected and France is this year’s guest of honour.

The fair dates back to the Middle Ages, when the Gutenberg printing press was invented in nearby Mainz.

Merkel and Macron symbolically printed out the first page of the Universal Declaration of Human Rights on a replica of the Gutenberg press late Tuesday, after touring the French pavillon.

The fair’s director Juergen Boos said the leaders’ joint opening of the literature extravaganza showed their commitment to “a strong, unified Europe”.

“Culture is the right approach to strengthen the European project, it’s easier than starting with the economy,” Boos told AFP.

Macron told the book fair audience he wanted to encourage Europe’s young people to speak at least two languages – “or even three or four” – and see the Erasmus exchange programme expanded so that every student could spend “six months in another European country”.

Merkel praised her French counterpart’s emphasis on the longstanding bonds between their countries, saying European leaders “have to do more” to teach young people about the value of culture and literature.

Merkel’s non-committal stance on Macron’s pitch for closer eurozone cooperation comes as the chancellor is heading into thorny coalition talks with two smaller parties after winning a difficult victory in elections last month.

One of the potential partners is the liberal and pro-business Free Democratic Party (FDP), which views Macron’s proposals sceptically and opposes any idea of German taxpayers’ money flowing to weaker EU economies.