Protestors holding a sign with crossed out faces of Austria's Chancellor Sebastian Kurz and Vice-Chancellor Heinz-Christian Strache during a protest against the coalition government between Austrian Peoples Party (OeVP) and the right-wing Austrian Freedom Party (FPOe) in Vienna, Austria, 15 December 2018. [Michael Gruber/EPA/EFE]

Thousands of protesters in Vienna braved snow and icy temperatures Saturday (15 December) to protest Austria’s ruling coalition between the conservatives and the far-right a year after they came to power.

Some 17,000 people took to the streets of the capital despite the bad weather, according to police estimates, while organisers put turnout at 50,000.

17,000 turn out in wintry Vienna to protest against the migration and social policies of Austria's ruling right-wing coalition: https://t.co/Bw1U529DiU

Many were waving banners reading “Fascists out of the government”, “Racism gets on my nerves”, and “More love, courage, togetherness”, as they made their way through Vienna before gathering outside the Hofburg imperial palace.

VIDEO: Thousands of protesters in Vienna brave snow and icy temperatures to protest Austria's ruling coalition between the conservatives and the far-right a year after they came to power pic.twitter.com/hNWLaYJJw4

The rally was held on the eve of the first anniversary since Chancellor Sebastian Kurz’s People’s Party (ÖVP) and its far-right Freedom Party (FPÖ) partner took office on 18 December 2017. 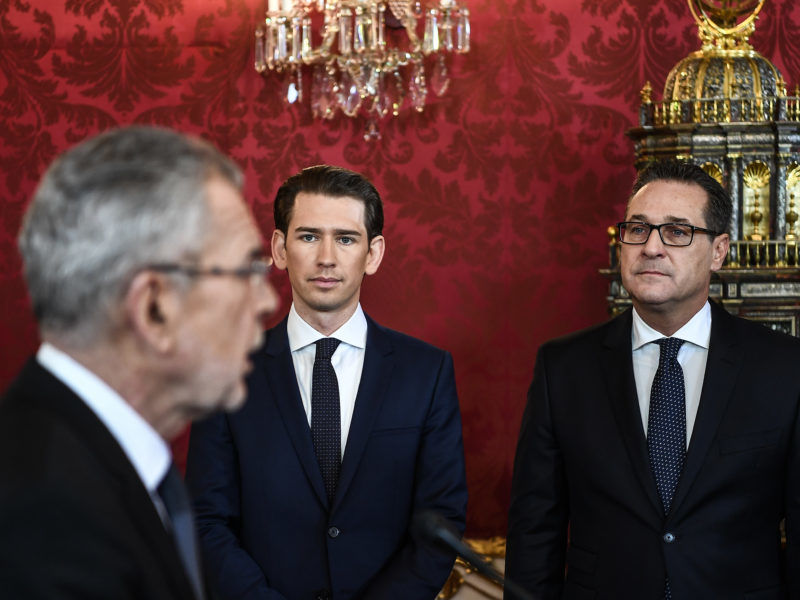 After two months of coalition talks with the far-right Austrian Freedom Party, Austria’s Prime Minister Sebastian Kurz on Monday (18 December) finally formed a government. Of the 16 members of his cabinet, only one has previously had government responsibility – Kurz himself. EURACTIV Germany reports.

Under their leadership, Austria — which also holds the EU presidency until the end of December — has introduced a series of tough anti-immigration measures over the past year.

In the latest move, the government last month finalised the details of welfare cuts aimed at immigrants, in a move criticised by anti-poverty campaigners and church groups.

Schieder is the SPÖ’s lead candidate in the European Parliament election in May 2019, when traditional parties face major challenges from far-right and eurosceptic populists.

With growth of three percent expected for this year and one of the eurozone’s lowest unemployment rates at 5.6%, Austria’s coalition is still riding high in opinion polls.

Kurz’s People’s Party won 31.5% of the vote in last year’s elections, but now scores around 35% in the opinion polls.

The Freedom Party, led by Vice-Chancellor Heinz-Christian Strache, has slipped only slightly from the 26% of the vote it won last year to around 24%.

The ÖVP and FPÖ have made harmony their watchword, as have Kurz and Strache.

At one press conference earlier this year where the duo were finishing each other’s sentences, Strache said: “Even I’m surprised at how quickly and brilliantly we’re working”.

“The effort that they’ve made to appear as united as possible is very popular with the public,” said political scientist Fritz Plasser.

Kurz’s polished style and the self-restraint shown by Strache have also helped the two men.

Part of that popularity is due to the economy.

With growth of 3% expected for this year and one of the eurozone’s lowest unemployment rates at 5.6%, the government rode a wave of European economic growth.

Despite generous tax break for families and pension rises, this year the government looks set to eliminate its budget deficit, a year earlier than planned.

Civil servants can also look forward to a pay rise of 2.8%, with most other workers receiving rises of more than 2.5% — even up to 3.5% for metalworkers.

The government has faced criticism abroad — notably for its perceived closeness to Russia — and it may yet face some roadblocks at home as divisions emerge and policies risk fraying support among the working-class part of its base.

One response to “Austrians protest FPÖ’s coalition with ‘fascists’”