EU leaders at the Palace of Versailles. [EURACTIV.fr]

Ahead of a summit in Rome to celebrate the EU’s 60th anniversary later this month, the heads of continental Europe’s biggest economies endorsed the vision of a multi-speed Europe, in which some countries could deepen integration faster than others. EURACTIV France reports.

In the Palace of Versailles on Monday (6 March), Angela Merkel, François Hollande, Mariano Rajoy and Paolo Gentiloni sought to answer the big questions surrounding the future of Europe and which path it should follow.

“Versailles is charged with history,” said François Hollande. It was in Louis XIV’s palace that the Treaty of Versailles was signed in 1918, at the end of the First World War.

The choice of location was clearly meant to evoke the gravity of the situation, as was the pomp with which the summit was carried out. 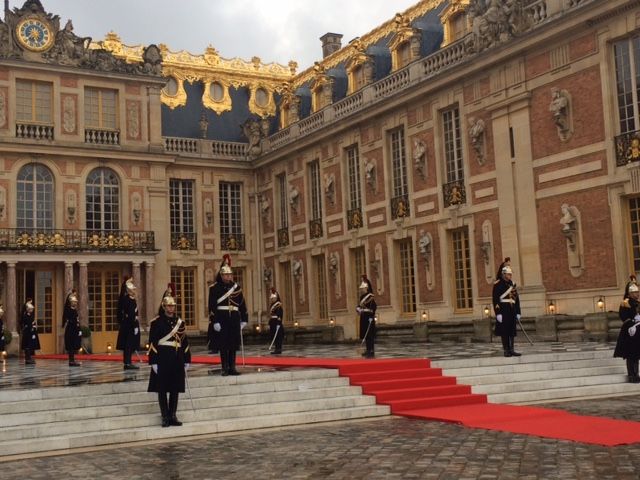 The French president stressed that the Rome summit should serve as a recognition that Europe cannot afford to take for granted the achievements of the last 60 years, such as peace and human rights.

“We cannot simply commemorate, together we have to reaffirm our commitment for the future,” Hollande said.

“We should have the courage to allow some countries to move ahead, to advance more quickly than others. Cooperation can be kept open to those that have fallen behind,” Merkel said.

Her priorities for the Rome summit – like Hollande’s – are defence, the economy, security and immigration. She made a point of stressing that “development in Africa has been insufficient in recent years”.

“If there was no EU we would feel the loss,” he said, adding that the bloc should think “far into the future”. “We need a social Europe which focusses on investment and growth.”

Rajoy emerged as the most convinced Europhile of the quartet. “My preferred option is to aim for deeper integration,” he said, backing the fourth option in the European Commission’s White Paper. This is an ambitious vision that would require treaty change; something France and Germany are not willing to support in the current climate.

No concrete project was announced after the meeting in Versailles. There had been speculation the leaders would shy away from making specific proposals to avoid antagonising member states who resist the multiple-speed concept, including many in Eastern Europe.

EU leaders are now considering Juncker’s options ahead of a summit in Rome on 25 March marking the bloc’s 60th anniversary, where they will make their own declarations about the way forward after Britain’s expected departure in 2019.

That date, combined with the rise of populist and nationalist figures, has triggered a wave of angst about Europe’s future.  The EU faces legislative elections in the Netherlands this month, followed by presidential elections in France in April and May.

Far-right candidate Marine Le Pen is widely forecast to reach the runoff in the French vote, while the party of firebrand anti-Islam MP Geert Wilders is expected to perform strongly in the Dutch race.

Merkel, meanwhile, is facing pressure from the hard-right populist party Alternative for Germany.

Trump’s nationalism and expressed scepticism about NATO have also stirred concerns in Brussels. On 31 January, the president of the European Council, Donald Tusk, listed the Trump administration as a “threat” facing the bloc, along with China, Russia and radical Islam.