By Georgi Gotev with Gerardo Fortuna | EURACTIV.com reporting from Strasbourg 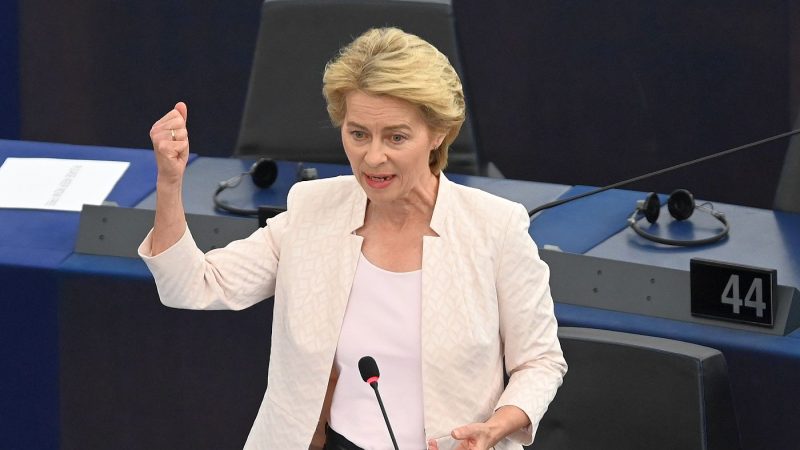 The European Parliament confirmed on Tuesday (16 July) Ursula von der Leyen by a paper-thin majority as the new European Commission president, giving her the reins of the EU executive for the next five years.

The German defence minister and mother of seven – a surprise candidate from the EPP, picked by the member states on 21 June – managed to convince a majority of Socialists and liberals in the Parliament with promises of reforms and climate action to become the first woman at the helm of the Commission.

She won 383 votes, compared to the minimum of 374 votes necessary, in a secret paper ballot – only nine more than the required minimum.

There were 327 votes against, with 22 abstentions or blank votes.

In comparison, five years ago Jean-Claude Juncker was elected with 422 votes. The difference, however, is at that time, there were no doubts that the former prime minister of Luxembourg would get the top EU job.

In the case of von der Leyen, who is a less known political figure and was not even a Spitzenkandidat, uncertainty prevailed in the few weeks before the vote.

More importantly, it appears that the three mainstream groups, EPP, S&D and RE, voted predominantly in favour of the nominee proposed by EU heads of state and government,  forging a majority which would be much needed in the years to come.

The Greens, also a pro-European group, have reportedly voted against, although individual MEPs may have broken the ranks.

Together the EPP, S&D and RE have 442 MEPs, and it is assumed that in all groups there must have been rebels. Sources from the S&D group estimated that 75% of the centre-left MEPs have supported van der Leyen.

Conversely, she also obtained support from what could be described as the opposite camp. Just before the vote, it was announced that Pis, the Eurosceptic ruling party in Poland, would vote for von der Leyen.

Concessions on the #MFF as price for the Polish vote in favour of #vonderLeyen? https://t.co/2G3qMyQElw

The success of von der Leyen could be explained by the flexibility she has shown in recent days, by taking on board political ideas of the socialist, liberal and green groups in her political platform, although she made no firm commitments to deliver on most of the issues.

At her first press conference as president-elect, von der Leyen did not hide her relief after a thrilling vote. Asked if the slight majority she obtained will change plans for her working programme, she saw the glass as half full: “In a democracy, majority is majority and I believe that I did not have it only two weeks ago.”

She added that she understands that MEPs still bear a grudge after the killing of the Spitzenkandidat process, but that it is also necessary to work with political groups to convince them and formulate the working program accordingly.

“I always wanted to work for Europe and for the EU,” she confessed. “I feel like I’m coming home.”

“I was born European and, as I grew up in Brussels, everything for me was European from the very beginning,” she added.

“I came pretty late in politics and I learn a lot in Merkel’s cabinet,” she said, also pointing out that she would not have won MEPs confidence today without the experience of the last fifteen years as a minister in Angela Merkel’s government.

On Brexit, she first avoided answering a question if a second vote to confirm her would be needed when UK MEPs will quit the European Parliament, but pressed again, she replied with a simple no.

She also said she doesn’t personally know Jeremy Hunt or Boris Johnson, the two contenders to replace Theresa May as the UK’s prime minister, but that she will follow the golden rule of working in a constructive way, whoever will negotiate on behalf of London.

Asked by EURACTIV how she will deal with the current geographical unbalance in the EU top jobs, she answered that she will make clear that Eastern and Central Europe are properly represented in her Commission.

Asked how she felt about getting support from the Polish right-wing Law and Justice, she just said that she does not know who had voted for her and that she wants to find a solution for bridging divisions between Northern and Southern, as well as between Eastern and Western Europe.

Asked if she was ready to take Eurosceptics on board as Commissioners, in a clear reference to Matteo Salvini’s Lega, she answered in a vague manner, saying that the world needed a strong and active Europe and the composition of the Commission would be the right one for the task.