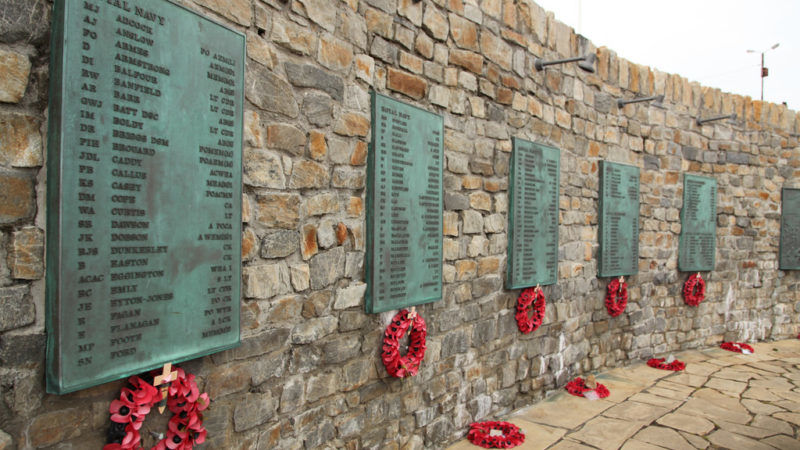 Memorial to British lives lost during the Falklands conflict. A Conservative politician has been widely criticised for comparing the war with the issue of Gibraltar and Brexit. [Liam Quin/ Flickr]

The European Union proposed on Friday (31 March) offering Spain a right of veto over Gibraltar’s future trade relations with the bloc. That would give Madrid sway over the fate of the enclave once Britain has left the bloc and the status of its overseas territory is no longer an internal EU matter.

Spain ceded Gibraltar to Britain in 1713 but has long called for it to be returned.

A former leader of May’s Conservative party, Michael Howard, said she would even be prepared to go to war to defend the territory, as then Prime Minister Margaret Thatcher did with Argentina over the Falkland Islands 35 years ago.

Former Tory leader condemned for appearing to suggest Theresa May would be prepared to go to war over Gibraltar https://t.co/95DQWePTXL pic.twitter.com/54Pd2gBaXK

Downing Street said May reiterated that Britain “remains steadfastly committed” to its support for Gibraltar, its people and its economy, in a call with the territory’s Chief Minister Fabian Picardo.

From every angle, Gibraltar is undoubtedly beautiful. It's good to be back home! pic.twitter.com/FH6wdkwhUd

“The Prime Minister said we will never enter into arrangements under which the people of Gibraltar would pass under the sovereignty of another state against their freely and democratically expressed wishes, nor will we ever enter into a process of sovereignty negotiations with which Gibraltar is not content,” a spokeswoman said.

UK PM May insists she will "never" allow Gibraltar to slip from British control against the wishes of Gibraltarians https://t.co/dfftZ4HBzg pic.twitter.com/AIlKccOH56

“The prime minister said we remain absolutely dedicated to working with Gibraltar for the best possible outcome on Brexit, and will continue to involve them fully in the process.”

Defence Secretary Michael Fallon said earlier that Gibraltar “is going to be protected all the way. The people of Gibraltar have made it clear that they don’t want to live under the sovereignty of Spain,” he said on the BBC’s Andrew Marr show.

Voters in Gibraltar, a strategically important rocky outpost at the entrance to the Mediterranean Sea, rejected the idea of Britain sharing sovereignty with Spain by 99% to 1% in 2002 but overwhelmingly backed remaining in the EU in June’s Brexit referendum.

“Thirty-five years ago this week another woman prime minister sent a task force halfway across the world to defend the freedom of another small group of British people against another Spanish speaking country,” he said on Sky TV’s Sophie Ridge on Sunday. “I’m absolutely certain that our current prime minister will show the same resolve in standing by the people of Gibraltar.”

The opposition Labour party said such “inflammatory” comments would not help Britain get what it needed from the Brexit negotiations. “Sadly it’s typical of the botched Tory approach which threatens a bad deal for Britain,” the party’s foreign affairs spokeswoman Emily Thornberry said.

Spanish Foreign Minister Alfonso Dastis refused to talk about veto rights when it comes to Gibraltar in an interview on Sunday, but said he viewed the EU’s stance very positively.

“When the United Kingdom leaves the EU, the EU partner is Spain, and in the case of Gibraltar the EU is therefore obliged to take the side of Spain,” he told El País. “I do not think it’s necessary to talk about vetoes”.

Random googling: John Lennon and Yoko Ono got married in Gibraltar "because it is quiet, British and friendly." pic.twitter.com/4GkvzdIR4L

3 responses to “Brexit could turn Gibraltar into next Falklands, senior conservative claims”