By Zuzana Gabrizova | EURACTIV.sk with Attila Kovacs and Levente Kocsis 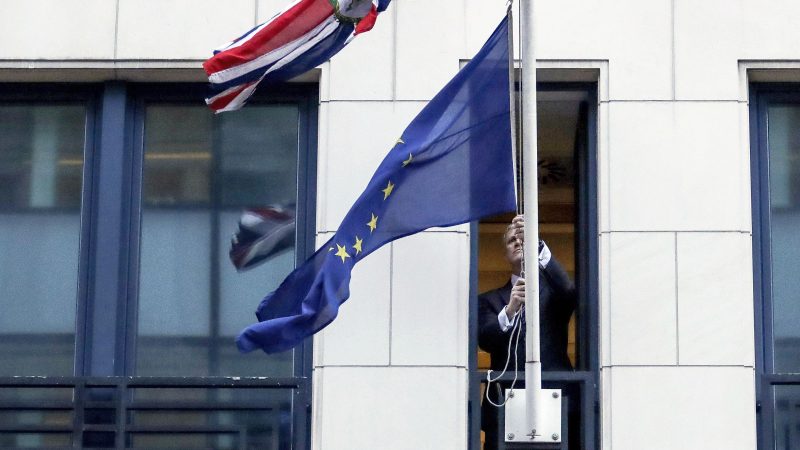 A man removes the European Union flag from the UK representation to the EU in Brussels on 31 January 2020. [EPA-EFE/OLIVIER HOSLET / POOL]

Without the UK, the EU can expect smoother legislative procedures in most Council configurations and policy areas, especially in justice and home affairs, institutional and budgetary matters as well as foreign policy. The voting weight of Britons will be particularly missed in economic issues, internal market, energy, and environment.

Brexit has been often described as the start of the EU’s disintegration but a closer look at the Council of the EU paints a different picture.

It shows that Brexit can actually lead to a deeper integration of the EU-27 in the long run, argue Attila Kovacs and Levente Kocsis, analysts at eulytix.eu, a Hungarian web platform that looks into EU legislation.

Using Council voting data since 2010, they analysed the voting patterns of EU member states in all 10 Council configurations and the 16 policy areas they cover, with the over-arching conclusion that without the UK, decision-making in the Council formations is expected to be less conflicting.

In many cases, the UK’s opposition was an obstacle to deeper integration and smoother cooperation among EU countries. Many blocking minority coalitions have been formed around the UK.

The voting patterns data shows that Brexit will have the biggest impact on the Justice and Home Affairs Council, which covers many political hot potatoes, including Schengen issues linked to the recent migration crisis and its consequences.

Additionally, the UK’s opt-outs and non-participation in enhanced cooperations exacerbate the effect.

The second place is occupied by the General Affairs Council, due to the UK’s wariness of the widening competences of EU institutions, as well as budgetary concerns. A typical example of the two intertwined is Britain’s vote against regulations 1141/2014 and 1142/2014 on the funding of European political parties, or abstentions during changes regarding the European Court of Justice.

In Foreign Affairs, the third in the ranking, the UK frequently took a different stand on a number of foreign policy issues, including the relations with Russia or the Trump administration. The UK has a tough approach to Russia, while Germany and many Central and Eastern European countries always tried to maintain a more balanced relationship.

What makes Agriculture and Fisheries Council contentious is the long-lasting conflict between the UK – as one of the most important net contributors – and other member states regarding the financing of the Common Agricultural Policy.

The bottom ranking is held by the Economic and Financial Affairs and the Competitiveness Council, where the UK was the least conflictual. London primarily considers the European integration as an economic project, therefore its support for policies in the related council configurations is more in line with the EU mainstream.

If we look at policy areas, rather than Council configurations, a slightly different picture emerges, however. Besides justice and home affairs, followed by institutional issues, employment and social policy also rank high, which might be explained by the politicisation of labour migration to the UK and social rights of these people.

Without the UK, these policy domains are expected to be less conflicting.

Economy and internal market appear towards the end of the ranking. The UK – being committed to the achievements and benefits of economic integration – has actually been an engine to deeper integration in this field.

The UK will be missed when energy, environment and consumer affairs are on the agenda, as the UK has been a proponent, and often a leader, of these policy issues. 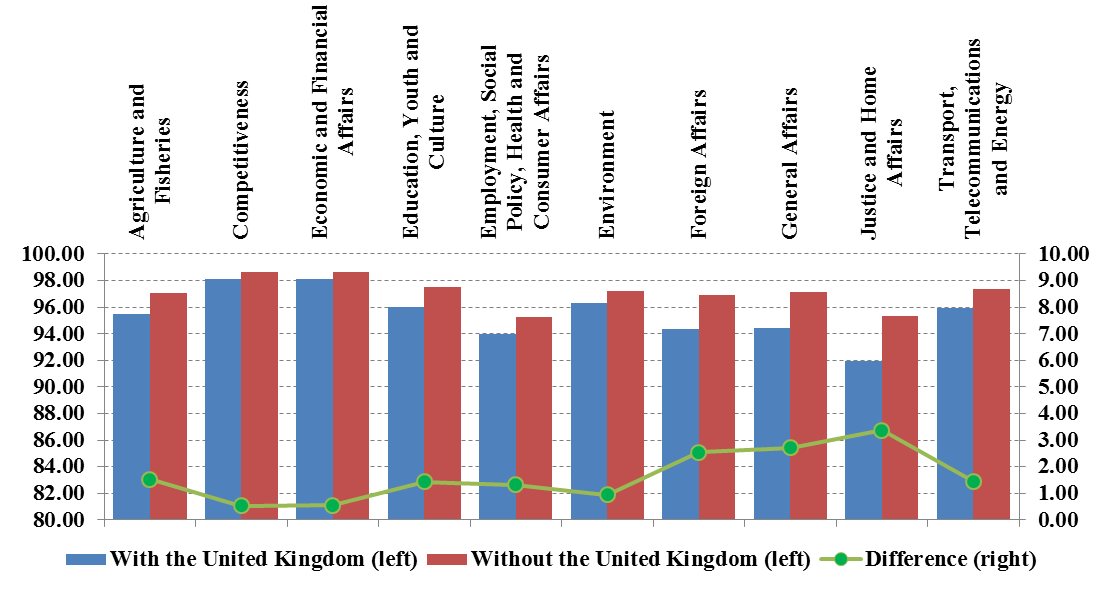 *Attila Kovacs is the senior research fellow at the Institute for Foreign Affairs and Trade in Hungary (IFAT)  and co-founder at eulytix.eu. Levente Kocsis is an eulytix.eu analyst.