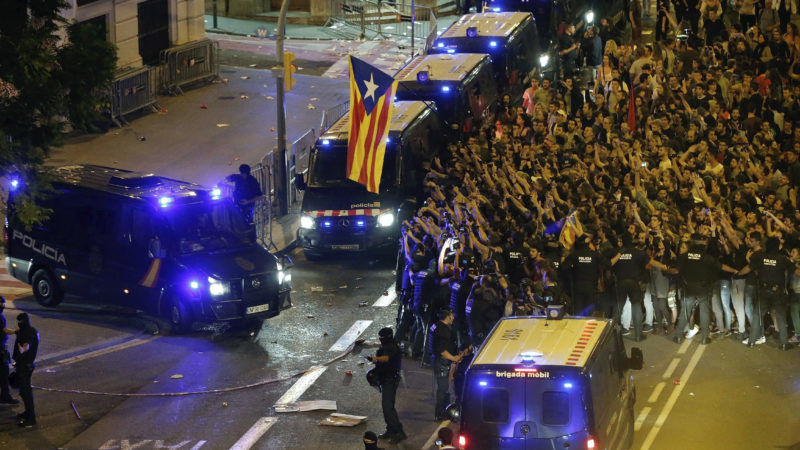 Catalonia is looking for an international mediator who would help build a minimum of “mutual trust” between Madrid and Barcelona following the region’s independence referendum on 1 October,  Catalan Permanent Representative to the EU told EURACTIV.

Amadeu Altafaj said the mediator would not take part in political negotiations. The priority would be to agree on sending 12.000 policemen deployed in the region back to their original posts to calm down the situation.

In addition, the mediator would assist in releasing Catalonian officials arrested for their involvement in the referendum and in restoring the money transfers to the regional government (Generalitat).

Finally, the mediator would suggest measures to avoid further escalation and build trust.

The referendum was declared illegal by Spain’s constitutional court. Catalonia’s government decision to neglect the judges’ ruling and pursue the vote provoked a dozen of arrests. In addition, payments to regional civil servants were made directly from the central government to avoid any misuse of the funds to finance the vote.

Altafaj went to Barcelona on Tuesday to discuss the next steps with the members of the Generalitat.

The mediation proposal is less ambitious than the initial request made by Catalonia’s pro-independence President Carles Puigdemont, who had initially called on the EU to intervene quickly and find a political solution, after hundreds of people were injured in disturbances across Catalonia on the referendum day.

But both the European Commission and the Spanish government rejected any involvement of EU institutions.

“The mediation is not going to happen. The EU does not want to take this role. Besides, it has a tradition of not interfering in domestic issues of its member states,” recalled Dave Sinardet, a professor of political science at the Free University of Brussels and an expert on nationalism.

Altafaj said the mediation role could be played by a non-EU entity, a foreign institution or personality that inspires “trust and consensus”.

“If other formulas have been rejected, let’s find new ones,” he said, as he emphasised that “the issue is now part of Europe’s public agenda”.

He explained that the Catalan government is working on some options and a proposal could be made public in the next few hours.

The Brief, powered by Eni: Politicians dug Spain in, will they dig it out?

The images of police breaking into voting centres in Catalonia to stop its unilateral referendum of independence, leaving more than 800 people injured, provoked precisely the opposite effect of what the central government had hoped to achieve.

The proposal came as tensions rose further in Barcelona after Sunday’s violence. Thousands of Catalans took the streets since then, businesses remained closed and public services operated with restrictions after a strike was called.

In some Catalan cities, local authorities forced hotels to kick out police officers hosted as part of the security operation ordered by Madrid.

In an unprecedented address to the nation on Tuesday evening, King Felipe VI called on the central government to “ensure the constitutional order”. He described the situation as “very serious for our democratic life”.

The institutional fight and tensions on the street took their toll on the stock market, with the Catalan banks losing around 15% since Friday.

Puigdemont was expected to speak at noon but postponed his speech for the evening.

The deteriorating situation came against the backdrop of a growing concern in the EU institutions about the political crisis shaking the fourth-largest eurozone economy. A large number of MEPs brought up the issue during a plenary debate about the next EU summit, held in Strasbourg on Wednesday.

Most of the legislators called on both sides to return to dialogue, while many expressed support to Spain and to the legal order.

But some MEPs also criticized the police intervention to abort the referendum, which left almost 900 people injured according to the Generalitat.

“We reiterate the condemnation of the police intervention seen over the last days. Fundamental rights are being violated in Catalonia, and the only proposal on the table is beating”, said Ernest Urtasun from the Catalan Greens (ICV).

“We don’t need tutelage or political mediators with insurgents”, said Esteban Gonzalez Pons, the head of the PP delegation in Parliament. “If Spain remains united or breaks up is for the Spanish people to decide”, he stated.

In a debate on Catalonia held later on Wednesday, Commission First Vice-President Frans Timmermans insisted on the need to respect the rule of law in the EU.

“You can oppose the law, you can change the law, but you cannot ignore the law. It is fundamental that the constitutions of every of our member states are upheld and respected”, he said. “Catalonia ignored the law”, he lamented.

He reminded that the Catalan dispute belongs to Spain’s legal order. But he called on both sides to “move from the confrontation to dialogue”.

The Dutch commissioner criticised the violence – “never an answer, never a solution”- but  said that the “proportionate” use of force in some cases is needed to protect the law.

And while he acknowledged the right for the freedom of expression, he stresssed that it exists for everybody. “One opinion is not more valuable than another just because  it is expressed more loudly,” he said referring to the pro-independence camp.

4 responses to “Catalonia waters down mediation proposal to convince Madrid”