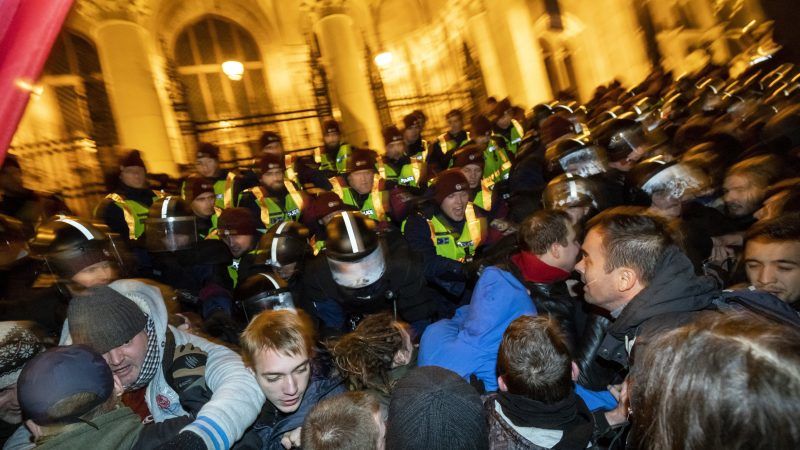 Supporters of the opposition parties protest against changes to the labour code at the parliament in Budapest, Hungary, 12 December 2018. [Balasz Mohai/EPA/EFE]

Prime Minister Viktor Orbán attended the session during which opposition lawmakers blew whistles, sounded sirens and blocked access to the speaker’s podium in an effort to prevent votes from taking place.

Orbán’s right-wing Fidesz party won a third consecutive two-thirds parliamentary majority at an election in April and habitually steamrollers bills through the assembly.

But speaker László Kövér, a loyal Orbán ally, had to open Wednesday’s session from the floor rather than the podium with opposition MPs accusing Fidesz counterparts of “unlawful” voting by breaking a series of technical rules.

The opposition’s “attempt at obstruction was unprecedented in 28 years of Hungarian democracy,” Kövér said later.

Tabled by Fidesz lawmakers, the controversial labour code change hikes the maximum annual overtime hours that employers can demand from 250 to 400 hours.

It also triples the time period for calculating overtime payments to three years.

The government argues the changes will benefit both those wanting to work more hours and employers who need more manpower.

“We have to remove bureaucratic rules so that those who want to work and earn more can do so,” Orbán said Tuesday.

On Wednesday he insisted that “the government is on the side of the workers”.

But trade unions and opposition parties have demanded the scrapping of what they call the “slave law”.

Outside the parliament building on Wednesday. some 1,500 protesters gathered, some taking a knee in a symbolic gesture that they “have become slaves”, the protesters told AFP.

A workers’ rally in Budapest on Saturday that drew several thousand demonstrators heard calls for wages — among the lowest in the EU — to be increased, rather than overtime hours.

Polls have also indicated that over two-thirds of Hungarians oppose the measures.

Unions have blasted the government for a lack of consultation over the measures and threatened a general strike and road blockades nationwide.

Opposition parties, including the nationalist Jobbik party whose lawmakers later marched across a bridge to President János Áder’s office to hand in a petition urging him to withdraw the bill, have called for street protests.

Critics of the bill accuse the government of cutting a backroom deal with German automotive giants, a key part of the Hungarian economy, who have complained about increasing labour shortages.

“They are passing a law dictated by German lobbyists against the interests of Hungarian people,” said opposition lawmaker Bence Tordai.

The justice minister László Trócsányi, another Orbán ally, would oversee the courts, leading some to warn of near-total political influence over the judicial system.

Judicial independence, already seen by critics as under threat in Hungary, was cited in a recent scathing and wide-ranging EU report on rule-of-law and democratic values in Hungary that prompted the European Parliament to launch unprecedented legal action against Budapest in September.

Trócsányi has downplayed fears and insisted the courts, to be set up by January 2020, will make the judicial system more efficient.

But the new courts are another “serious threat to the rule of law in Hungary,” according to prominent rights group the Hungarian Helsinki Committee (HHC).

Our analysis on the soon-to-be voted new ?? laws on the administrative court system: https://t.co/JprxowG4Qy #freecourts pic.twitter.com/1CjNBZrIpe

“The boundaries between the executive and judicial power in Hungary will be blurred,” it said in a statement.

This gives the justice minister so much power to appoint, promote and discipline judges that it paves the way for a clear interference,” said @martapardavi . The government should have waited for an opinion from the @VeniceComm https://t.co/GWtN16GIjJ via @financialtimes

This is the end of democracy calling - are we reaching?

When will you stop supporting Orbán's authoritarianism in Hungary?

When will you stand up for fundamental democratic values?