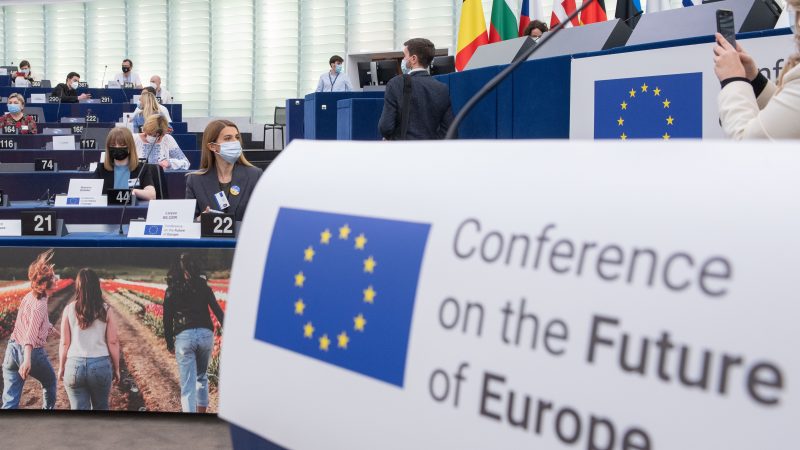 “The Conference on the Future of Europe has been the first of its kind, a major pan-European democratic exercise with citizen-led debates. It enabled people, especially young people, from all across Europe, to share their concerns, their aspirations about our common European future,” Metsola said. [European Parliament]

CoFoE is the EU’s participatory democracy experiment where citizens across Europe take part in EU policy-making. The plenary is composed of citizens, civil society representatives, and many national and EU politicians.

In the letter, citizens say that it is not possible “to have a constructive debate within the plenary when its members are not in the room”. They called out those who do not come and those who “leave the room right after they give a statement”.

They believe that the “blue card” method which is used in the European Parliament to reply to a specific speaker, “is not effective in this way”. Citizens refer to people in the room and others who participate online who just disconnect after their speech.

Citizens also specified that while there are valid “reasons for absence” due to the current crisis, politicians should be more involved in the conference’s process, as “the room is getting increasingly empty”.

The letter states that “more than [roughly] 100 out of the 108 citizens attended in the room or online. Many of them have to take [days off] from work, school or university to join the conference. And we made an estimation that out of the 341 members of the other components, about 90 were present. This means [roughly] 250 were absent”.

Citizens urged politicians to be more present in the next session, scheduled for Strasbourg on 8-9 April.

This is not the first time citizens have complained about politicians’ behaviour. At a meeting in early March, citizens noted the same issues were present- mainly that of disinterest from politicians.

Despite a lack of political interest, citizens are otherwise satisfied with the quality and effectiveness of ongoing discussions.

The representative from the panel on EU in the world and migration,  Krasimir Zlatinov told EURACTIV that the plenary was “very well-organised and the citizens had enough opportunities to express themselves”. However, he too was disappointed by the lack of MEPs presence.

Similarly, the representative of the democratic values panel Valentina Barzani told EURACTIV she feels the process is both satisfying and intense. While explaining that she often has to work on her involvement at home, she lamented the absence of politicians.

Greta Adamek, the representative of the stronger economy, jobs, education and youth panel, told EURACTIV that the conference’s timing meant it was hard to have fruitful discussions. “We only have one session left in which we could discuss the content of the topics. In the next session [8-9 April] we should already finish our work. Citizens feel that we need more sessions to achieve a decent result”.