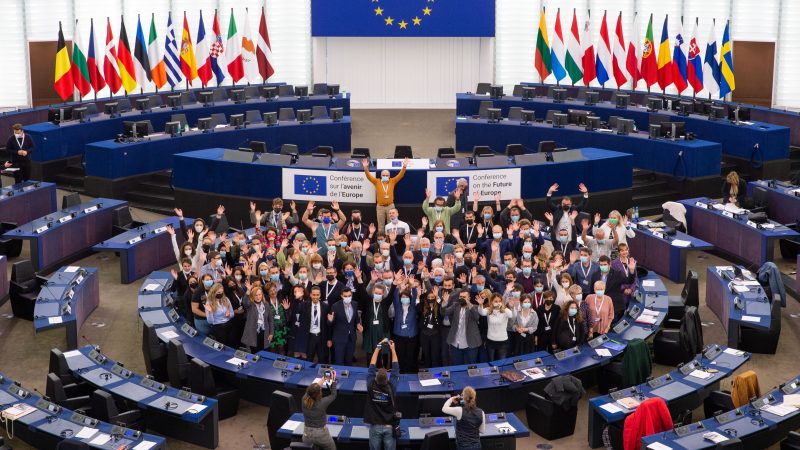 Conference on the Future of Europe (CoFoE) - Component Citizens meeting

Three out of four thematic citizens panels of the Conference on the Future of Europe (CoFoE) ask for a more empowered and accountable EU, allocating resources to implement the ecological transition and guarantee a more reliable spread of information.

These themes are apparent in all three panels that finalised their recommendations between December and February.

The CoFoE is the EU transnational democracy experiment that involves EU citizens in policy-making through different in person and online debates.

The role of the EU

Citizens see EU institutions as responsible bodies which can decide on a comprehensive series of financial allocations and political choices. They believe that the EU should harmonise different competencies to improve the quality of living for EU citizens and residents.

For example, in panel two on democracy values, citizens asked to support and implement the Code of Practice on Disinformation and the European Digital Media Observatory to create “awareness about disinformation, providing easily accessible statistics, appropriately sanctioning those who spread disinformation based on a legal framework, and tackling the sources of disinformation”.

In panel three on the environment, climate change, and health, citizens asked “that treatments across the EU are of equal quality and fair local cost”, through improving competencies of the “European Medicines Agency (EMA), or the creation of a new specialised European procurement agency, which would be competent to negotiate and obtain more suitable prices for medicines for all the Members States”. They also want to minimise pharmaceutical industry monopolies.

Panel four on EU foreign policy and migration recommend the “revision and an intense communication campaign at across European level to be initiated in order for EURES (European Employment Services), the EU Immigration Portal and the EU Skills Profile Tool for Third Country Nationals to be better known by European citizens and more frequently accessed by EU companies to advertise and publicise their vacancies”.

Issues addressed in all three panels

Citizens are also concerned about the sustainability of the supply chain and production in all its stages. They are also concerned about consequences created by pollution, which, according to them, are the reasons for the climate crisis, the loss of biodiversity, the transition of our planet to a more inhospitable place, and unhealthier conditions of both animals and humans.

They see in EU institutions a tool to guarantee, for instance, the general well-being of humans and animals.

Through different policies of financial support, citizens want to sustain eco-friendly farming and production with subsidies and incentives and the helping of small companies and farmers to promote a more sustainable supply chain.

They are also keen to avoid allocating resources to mass production companies or, for example, entities that have intensive production.

Their final goal is to make healthy food more affordable and discourage the consumption of junk food. Regarding this matter, they see the EU as responsible for realising this at a continental level.

They apply a similar approach to trade relations with third countries, which from citizens’ point of view, they have to respect both workers human rights and the sustainability of production.

All panels make direct or indirect references to encourage the implementation of renewable energy to reduce CO2 emissions. They see the ecological transition towards developing eco-friendly technology as a critical strategy to face the climate crisis.

Participants were clear that the EU has to work harder to provide more information and communicate it b better to the public, especially on issues like migration, junk food, and how institutions work. They were also clear that the EU should protect the media environment, supporting independent media and pluralism.

Citizens feel that fake news and disinformation have an impact on the daily life of people, and it should be a major EU concern.

Panel two and three have already discussed their recommendations at the end of January in Strasbourg with the Conference’s plenary.

At the end of February first panel on stronger economy, social justice and jobs/education, culture, youth and sport, and digital transformation will finalise its recommendations in Dublin. Together with the fourth on EU foreign policy and migration, this panel will discuss their recommendations in Strasbourg next month.