Civil organisations in Hungary brace for government crackdown on NGOs

Thousands of participants attend a protest against the draft law on civil society organisations' transparency at the Heroes' Square in Budapest. Hungary, 12 April 2016. [Zoltan Balogh/EPA]

Non-governmental organisations in the crosshairs of Hungary’s EPP-affiliated government are seeking new funding sources and legal ways to counter a new law that would allow the interior minister to ban NGOs deemed to pose a “national security risk”.

The government says the “Stop Soros” bill, which would impose a 25% tax on foreign donations to NGOs that back migration, is meant to deter illegal immigration, which Orbán says has been stoked in part by Soros. 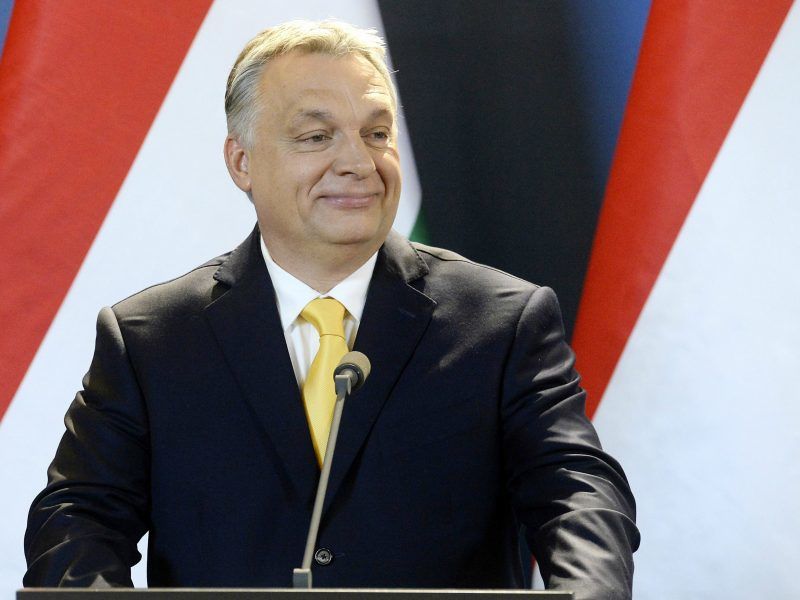 But NGOs that could be affected by the law, once it is passed by parliament, which reconvenes on 8 May, say the bill fits a pattern of cracking down on civil organisations over the past few years. They say it targets specific NGOs that Orbán sees as unwanted critical voices.

“We are examining how the “Stop Soros” law could be legally attacked, as … its current text (submitted to parliament) is not in line with the constitution, EU law and international legal norms,” said Stefánia Kapronczay, executive director of the Hungarian Civil Liberties Union, a human rights NGO.

“We will decide on what steps we take once we see the law passed in parliament.”

Last year Orbán’s Fidesz party tightened regulations on foreign-funded NGOs, requiring them to register with authorities and publicly declare their foreign-funded status. The government said it wanted to ensure greater transparency, but NGOs said the change stigmatised them.

Government spokesman Zoltán Kovács told website Index.hu on 8 April, the day of Hungary’s election, that political activism by NGOs should be stopped.

“Those loopholes that still exist in the legal system that allow organisations not entitled to do so … to meddle in political decision-making should be closed,” Kovacs said.

Fidesz politicians said the “Stop Soros” bill would be one of the first to be passed in the new parliament.

We remain committed to our work to support democratic freedoms in Hungary as its government stifles civil society. https://t.co/ycMLHQKJTa

The new law says NGOs that “sponsor, organise or support the entry or stay of third-country citizens on Hungarian territory via a safe third country in order to ensure international protection for them … qualify as organisations supporting migration”.

Under the law, activists who organise or support migration could face restraining orders preventing them from approaching the EU’s external borders in Hungary.

“‘Stop Soros’ will change our operational environment, it will seriously affect our operation in terms of licensing and the restraining order,” said Márta Pardavi, Helsinki Committee co-chair.

Pardavi said the law “shows a clear political intent” to hamper organisations which seek to make the government accountable.

NGOs that may be affected are seeking new funding sources.

András Kováts, director of the Hungarian Association for Migrants (Menedek), said they had been doing some contingency planning since the government in February suspended its tender under the European Union’s Asylum, Migration and Integration Fund, which means funding for programmes is uncertain now.

“The most important thing for us now is to plug the financing that we lose because of this suspension,” Kováts said. “As for “Stop Soros”… we do not know what impact that will have on our operation as there is still too much uncertainty.”

Transparency International, an anti-corruption NGO which gets about 13 percent of its financing from Soros’ OSF, says it does not expect to be impacted by the new law, as it is not dealing with refugees. But if all foreign donations were to be taxed, that would be a blow, said executive director Peter József Martin.

“This would… seriously affect our operation. Would it mean a staff cut? Almost certainly,” Martin said.

The Igazgyongy (Pearl) foundation, which helps impoverished children in eastern Hungary, also says it does not expect to be affected by the new law, but still plans to broaden its financial backing. Igazgyongy gets 10% of its money from the OSF in Hungary.

“What we are considering now is a strengthening of our strategy to collect donations… to make people and companies who sympathise with our work committed for the long term,” said Nóra Ritók, head of Igazgyongy.