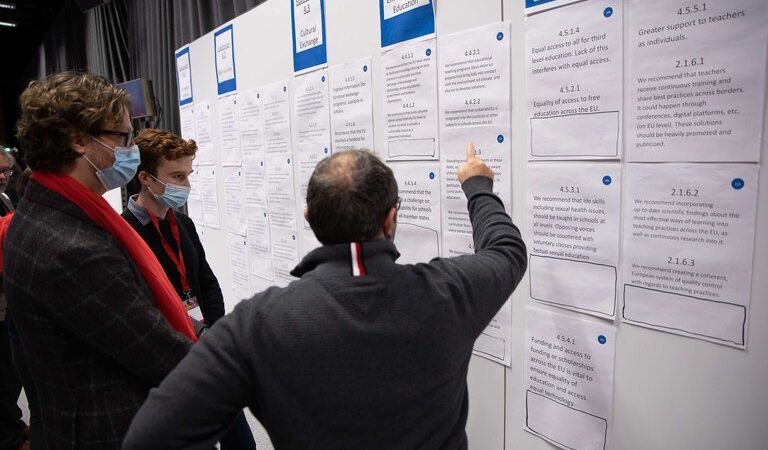 Conference on the Future of Europe - Citizens in Dublin [European Parliament]

Preparing schools for pandemics and wars, fighting cybercrime and disinformation, and getting society accustomed to digitalisation are some of the approved suggestions from the conference on the future of Europe (CoFoE) meeting at the end of February in Dublin.

A total of 48 recommendations were proposed and approved by participants in the EU’s first deliberative democracy experiment, which aims to involve European citizens in EU policy-making.

The panel in Ireland’s capital covered many subjects, such as economy, social justice, jobs, education, culture, youth, and sport.

As a result of this variety, the approved recommendations included topics that you would not usually group together, such as legalising euthanasia, establishing a minimum wage, and democratising the online world.

One trend that emerged was the desire to update existing legislation to be relevant in today’s world and to adjust to the changes that have taken place in society over the last two years.

Education on the agenda

Several recommendations are dedicated to education, including a request to better integrate national programs with EU ones and prepare younger generations for the new reality.

For example, they proposed to make students more aware of fake news and the dangers of the internet. Additionally, they want to raise awareness of the importance of health and its connection to the environment.

Citizens believe education should be more internationalised and include teaching English, promoting exchange programmes and developing a standardised CV.

They also want schools prepared with plans in case of a wide range of emergencies, for instance, establishing rules for smart working and online lessons in case of war or pandemic.

They are also particularly concerned about energy. On the one hand, they promote more investments for research on renewable energies and materials. Still, on the other hand, they addressed energy affordability and access to it as a human right.

Another element that also influenced citizens’ deliberation is the Russian invasion of Ukraine, as the panel started just 24 hours after the beginning of the war.

For this reason, as already reported by EURACTIV, panellists proposed and organised a flash mob to support Ukraine.

The war in Ukraine is likey a partial driving force behind the recommendations that asked to harmonise the fight against cybercrime and fake news and target data protection.

They understood that the web world could be a powerful tool of war that has been often used, even by governments.

Together with the one dedicated to the EU in the world and migration, this panel is discussing their recommendations with the Conference’s plenary on 11 and 12 March in Strasbourg.

The final meeting of the whole experiment will take place on 9 May, where institutions will officially take the “baton” to follow up on citizens’ proposals.

As already reported by EURACTIV, EU institutions have not yet established a methodology for the follow-up.

However, the co-chair of the Conference Guy Verhofstadt told EURACTIV that institutions expect to have a meeting with citizens to explain how their recommendations will be eventually implemented.

Despite a significant delay, institutions are trying to create a process to be more accountable towards the citizens who have taken part in this EU democracy experiment.