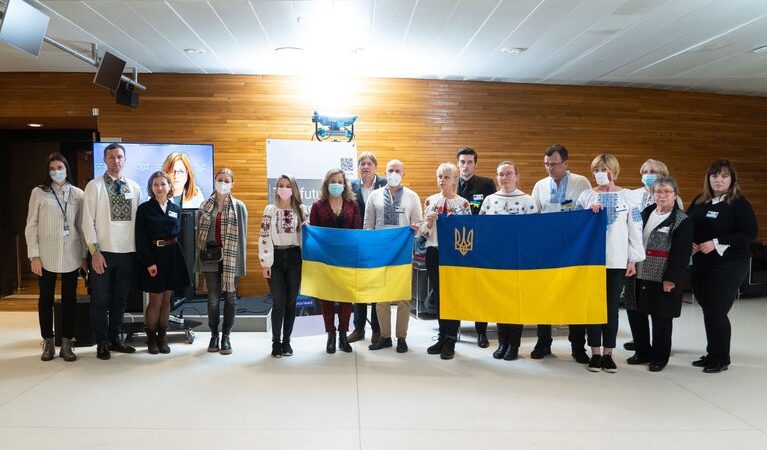 Conference On the Future Of Europe - Meeting with Ukrainian citizens. [European Parliament]

Participants from the Conference on the Future of Europe (CoFoE), the EU’s democracy engagement project, met in Strasbourg last weekend (11-12 March) to speak in front of the conference’s plenary. At the event, Ukrainian activists and MPs urged for more drastic EU intervention in Ukraine, including the implementation of a no-fly zone.

Addressing the room, activist Bozhena Boriak, from Kyiv, emphasised the need to isolate Russia both financially and economically, as well as an increase in military support for Ukraine. She described the conflict as a “common war”, adding that if her country should fall, the EU could face “a stronger enemy later”.

“Ukraine is the heart of Europe” echoed another speaker, Anna Shchekatunova, a refugee from Donbas. She warned of the dangers in allowing Russian President Vladimir Putin to take control of nuclear power plants, and argued for a no-fly zone to mitigate the nuclear risk. “Putin is not to stop”, she said, urging lawmakers to respond quickly and appropriately.

Activist Dmytro Sherembei agreed, speaking from Kyiv. He called on authorities to “close the sky”, arguing that this will make the country much safer.

Ukrainian MP Maria Mizentseva followed, insisting a no-fly zone must be established, at least over cities and villages. She also spoke on the economic and logistical difficulties inside the country, saying that “as activists and MPs, we are struggling to provide drinking water and food to people that are waiting to escape.”

All speakers finished their speech with the words “glory to Ukraine”.

Response from lawmakers and CoFoE participants

Co-chair of the Conference’s plenary, Commission Vice President Dubravka Šuica, and MEP Guy Verhofstadt responded, voicing their personal and institutional support for Ukraine. In particular, Verhofstadt underlined the necessity to help Ukrainians both financially and militarily, and to help them become a candidate country for EU accession.

EU high representative Josep Borrell joined via video call, saying that the citizens’ recommendations on EU foreign policy that were approved in mid-February adequately address how the EU should strategically face Russia’s behaviour.

“I read your recommendations adopted in Maastricht,” he added. “They were written before the war started but they show great ambition.”

The high representative explained that these proposals identified three main areas for action: the EU’s continued partnership with other states; surveillance and stability, with a focus on autonomy and borders; and “a strong and peaceful world, focusing on security and defence”.

He also said that the proposal to vote with absolute majority in the Council on subjects relating to foreign affairs “would facilitate [his] job,” and he hopes that his successor will have increased power as high representative.

Support for the Ukrainian speakers was also echoed by CoFoE’s participating citizens, who welcomed them to the room with a long round of applause, and later proposed a minute of silence to commemorate Ukrainian civilian deaths. On 25 February, participants organised a flash mob in Dublin with Ukrainian flags.

The European Parliament has put Ukrainian flags both at the entrance and in the hemicycle.

Participants’ recommendations are currently in the discussion stage.

The follow-up process of how these recommendations are to be implemented in EU policy-making is yet to be established in detail, however discussions are scheduled in coming weeks.

The final meeting of CoFoE will take place on 9 May 2022.