IMF Managing Director Christine Lagarde's warnings about the growing inequality were ignored by the forum in 2013. [WEF/swiss-image.ch]

The World Economic Forum concluded its four-day gathering by calling for more inclusive growth to face growing populism and the backlash against globalisation.

On Friday afternoon (20 January), most of the World Economic Forum’s attendees in Davos were trying to find their way back home.

After four days of intense networking and debates under the theme “Responsible and Responsive Leadership”, only one voice was heard in the corridors of the congress centre in the Swiss resort: Donald Trump’s words were an attack against the 1%, a charge against globalisation.

“The establishment protected itself…their victories have not been your victories…That all changes starting right here and right now,” he promised in his inaugural address. 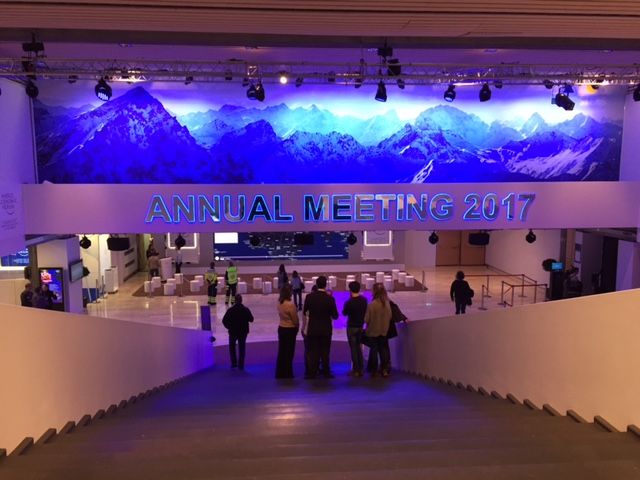 Before the forum started in Davos, a well-known health retreat decades ago, the world’s leading financiers and policymakers acknowledged the current growth model urged healing.

““Across the globe, there is evidence of a growing backlash against elements of the domestic and international status quo,” warned the World Economic Forum’s 2017 Global Risk report.

It was no longer sufficient to create more growth. The pie had to be better shared by all.

Branko Milanovic, an economist and professor at the City University of New York’s Graduate Center, showed that “the biggest gains of globalisation have gone to a small, increasingly rich elite in the industrialised nations and to Asia’s rising middle class, while the main losers have been lower-income people in developed countries”, he told PwC’s pre-Davos report.

“Liberals were wrong when they said that markets would take care of everything,” and governments should be kept aside, told the audience European Commission Vice-President Frans Timmermans. He noted that “even Davos” agreed with it now.

“This world will not benefit everyone without governance,” he stated.

This crisis of the middle class fuelled nationalism and protectionism around the world.

This dangerous cocktail is “reverting the tendency seen since the 90’s that helped to narrow the gap between countries”, said Ray Dalio, founder and chairman of Bridgewater, the world’s largest hedge fund.

“We may be at the end of that…there is a significant risk of the end of globalisation,” he warned.

Brexit and Trump’s victory were only the early signals. The list of setbacks could increase this year, as Europe’s electoral calendar will offer numerous opportunities for voters to express their anger and discomfort in The Netherlands, France, Germany and, highly likely, in Italy.

Euroscepticism is a reminder of how closely intertwined globalisation and the European project are. Both are perceived as elitist projects, inspired by similar values of ‘openness’. Both are built on purported economic benefits in order to encourage trust.

The economic recession turned voters’ indifference toward these forces into hostility. The political establishment’s argued disinterest in the declining living standards of broad segments of the population triggered global unrest, and a rise of far-right parties, seemingly interested in the welfare of the average European.

According to Oxfam, the world’s eight richest billionaires control the same wealth between them as the poorest half of the globe’s population.

IMF Managing Director Christine Lagarde, tried to sound the alarm about the growing inequality in 2013 in the Davos forum.

Lagarde was not only ignored but suffered “a strong backlash from economists, including in the IMF, because they said that it was not our business to worry about this”, she confessed at a panel.

Now she urged politicians and businessmen to correct the course.

“If we have strong signals, like the ones from voters, it is really time to see what policies we put in place to solve this,” Lagarde said.

Although there is no ‘silver bullet’, Lagarde commented that policies need to be “more granular, more regional, more focused…and more redistribution of what we have in place at this moment”.

After more than 25 years of ignoring the protests of those demonstrators who called for a globalisation for citizens and not for companies, that stood up for ‘fair’ and not only ‘free’ trade, the message has been finally received by those in power.

Comments heard in Davos this year were closer to the anti-globalisation protesters’ complaints in Seattle in 1999 than to the forum’s buoyant optimism a decade ago.

Bob Moritz, the CEO of PwC, noted that a “growing awareness” exists “like never before” about the need to correct the failures of the globalisation.

Despite the consensus about the diagnosis is robust, only few believe that the cure will follow.

Richard Samans, a member of the managing board of the World Economic Forum, blamed the lack of “practical consensus” among policymakers and business leaders on how to achieve more inclusive growth.

Speaking off the record in the corridors, businessmen and consultants agreed that CEOs and politicians had other priorities as soon as they left the Swiss Alps’ bubble.

But the situation would only get worse if action is postponed. As many attendees warned, the global imbalances, in particular within developed nations, would only increase further with the impact of the digital revolution.

Lagarde pointed out that the ongoing ‘fourth’ industrial revolution will disrupt societies in a greater manner than globalisation.

Robots and artificial intelligence will make hundreds of thousands of jobs redundant. Social security systems would need to adapt drastically. And new solutions such as a universal basic income may be implemented.

But the system could need a deeper change in order to prepare citizens for this new reality.

“The education model is not going to work”, stressed CEO of Santander, Ana Botín. “We need to change it, and we need to do it fast,” the European top banker urged.

For the World Economic Forum, "Responsive and Responsible Leadership" requires recognising that frustration and discontent are increasing in the segments of society that are not experiencing economic development and social progress. Their situation will only become more uncertain with the onset of the Fourth Industrial Revolution and its impact on future employment.

The organisation adds that "Responsive and Responsible Leadership" entails a deeper commitment to inclusive development and equitable growth, both nationally and globally. It also involves working rapidly to close generational divides by exercising shared stewardship of those systems that are critical to our prosperity.

"In the end, leaders from all walks of life at the Annual Meeting 2017 must be ready to react credibly and responsibly to societal and global concerns that have been neglected for too long," the forum stated.